The main objective is to analyze and compare the failure behavior of a plate using different material models LAW-1, LAW-2, LAW-27 & LAW-36 along with Johnson-cook Failure card.

1. The total number of cycles, Energy error, mass error and simulation time.
2. Notice the animation of all 7 cases and describe the animations in brief on the basis of whether the elements are being deleted or cracked.
3. Plot energies and notice any difference.
4. Based on all the results, which case would represent the on-field scenario.
5. List down case by case result and your conclusion as to why the failure happened.

#Material LAWs in Radioss which we use.

Run the file and see Animation into Hyperview with Von Mises simple average stress values and plot the Internal & kinetic Energy curve for that in Hypergraph 2D. HyperGraph minimizes the manual effort and time required to generate plots. Run the simulation for that and observe the results.

Take our default file and change the name to Law2_epxmax_failure_0000 RAD file. Open it into Hypermesh see properties which are assigned to the plate and model also have failure card contains certain parameters:

In material Properties file also carry EPS_p_max value = 0.151 which means elements will fail when the stress value is above 15% of plastic strain.

In case 2 we have to change some failure card properties like:

All other things keep the same for case 2.

So run that model and observe the difference between both the cases.

We can see that in case 1 stress generation is a little less comparing to the case 2 because of case 1: Xfem = 0 so if your material model needs to be very accurate and the way Ixfem treatment goes it dissipates little more energy because of that small propagation or very local deformation Ixfem could be the good method.

But if we want to see how the crack is propagated over a longer distance then Ixfem may not be a great idea.

Element in case 1 shattered rapidly as compared to the case 2.

Ifail_sh is 2 that means the shell is deleted if all layers in the failure zone. 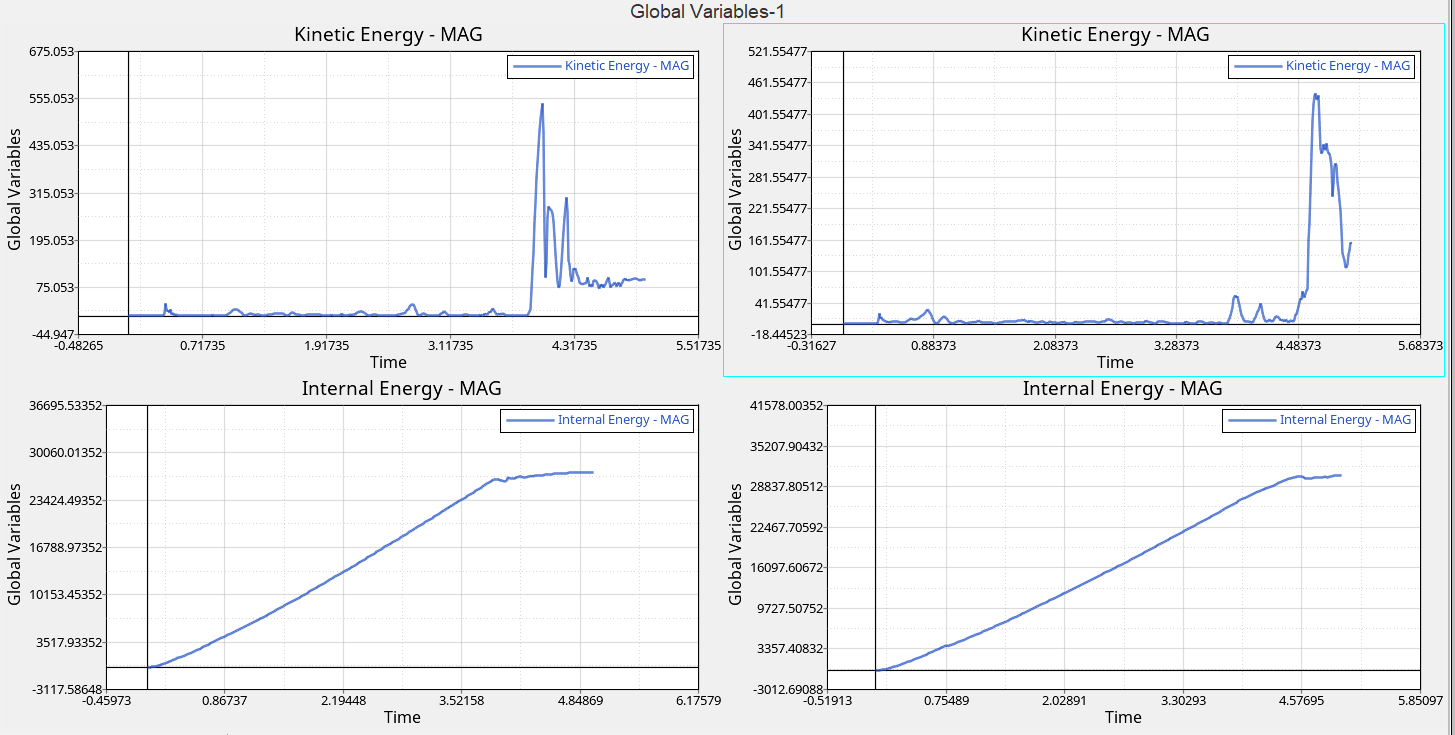 Kinetic energy is more fluctuating because of more number of elements cracked in case 1 as compared to case 2. Elements did not crack more in case 2.

Internal energy is the same at starting but later on it became constant soon in case 1 and it keeps on increasing in case 2 because elements didn't crack and split more.

Here we compare the cases with and without Equivalent plastic strain i.e. EPS_p_max.

In Case 4 we delete the value of EPS_p_max that means it goes to its default value.

Simultaneously, we delete the Johnson failure card for both cases.

Run both the simulations and compare the results.

The plate gets rupture and elements crack and get deleted because we know the Eps_p_max value is 15% of plastic strain in case 3 and we delete in case 4.

We can see in the picture the maximum Von Mises stress value in case 3 is very less compared to case 4 because in case 4 plate doesn't rupture so strain keeps on increasing and simultaneously stress also increases continuously and we also delete Johnson's failure card that's why in case 4 elements not getting deleted. 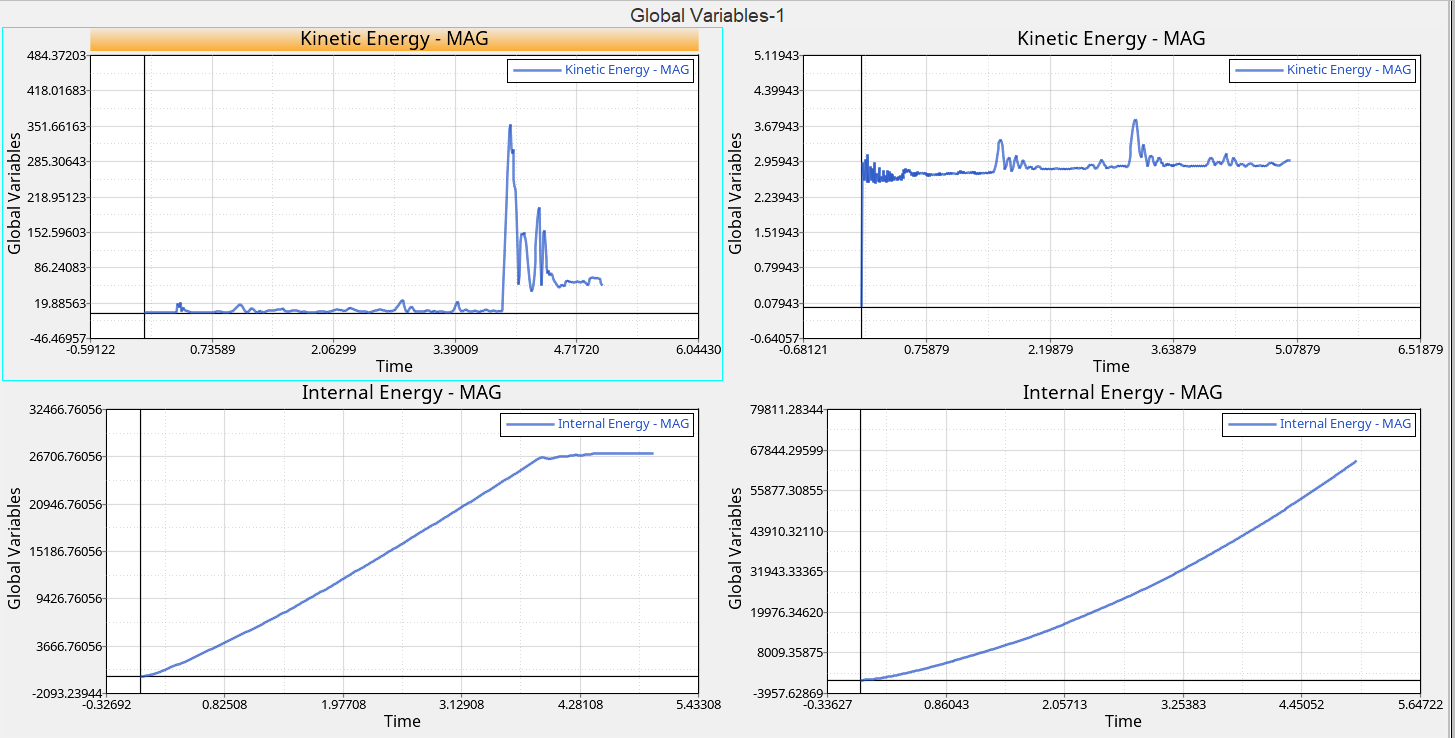 In energy curves, we can see a clear difference between both kinetic and Internal energy.

Kinetic energy is equal to 19 and it little fluctuates and around 4 ms after that it suddenly hikes to very high value and after that, it fluctuates. This is because plate before rupture store good amount of internal energy and when plate suddenly breaks the elements get crack and move fastly.
With comparing to case 4 plate doesn't rupture so it continuously stores internal energy and gets deformed and with that kinetic energy is nearly equal to 2.05 around in the beginning and only little fluctuation and remains the same from where it starts.

3. For Case 5: We use LAW 1 which means Isotropic elasticity: Linear elastic material which follows Hook's Law. It is good for elastic materials, this law represents a linear relationship between stress and strain. The material stiffness is determined by only two values Young modulus and Poisson's ratio.
We change the Card Image to M1_ELAST and (Density) Rho_initial = 0.0028, Young modulus E = 71000 and Poisson's ratio = 0.33 remains the same. Shell properties are also the same as the recommended properties.

Here Von Mises Stress values hike too much because as it is elastic material it stores so much of strain and simultaneously stresses are generating.
There is no plastic material is involved in this case which gives us linear deformation only and Internal energy increases exponentially here as it is a perfectly elastic material.

We can see that kinetic energy is nearly equal to zero but as time increases it start to increase very slowly but at the end, it suddenly hikes because at that time so much of strain already stored.
LAW 1 should not be used for part undergoing large deformation.

We use LAW 27 (PLAS_BRIT) Elasto-Plastic material with brittle failure. 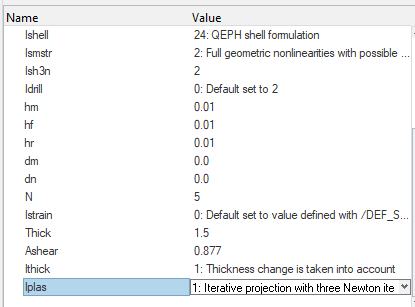 Change the material card to the Aluminium material and now run that file and observe the simulation.

Here we can see that the whole plate will rupture bur elements didn't crack much.
Material damage is accounted for prior to failure. Failure and damage occur only in tension. This law is applicable only for shells. Yield surface definition is the same as LAW 2.

Kinetic energy is fluctuating but near to zero but suddenly around 4ms it hikes and again decreases. at that point the whole plate gets rupture & split at that point internal energy goes to the constant curve at the end, initially it increases gradually w.r.t time.

This law models an isotropic elastoplastic material using a user-defined function for the work-hardening portion of the stress-strain curve. Ex- Plastic strain vs stress for different strain rates.

In case 7, we use two curves for making our model and save the data in files.

Assign the curve to the component and after that run the file.

In the Test curve the plate rupture abruptly and crack elements get deleted after some instant but in the standard curve, 16% of equivalent plastic strain value the element should fail and achieved sooner. The Von Mises stress is also more in the test curve. 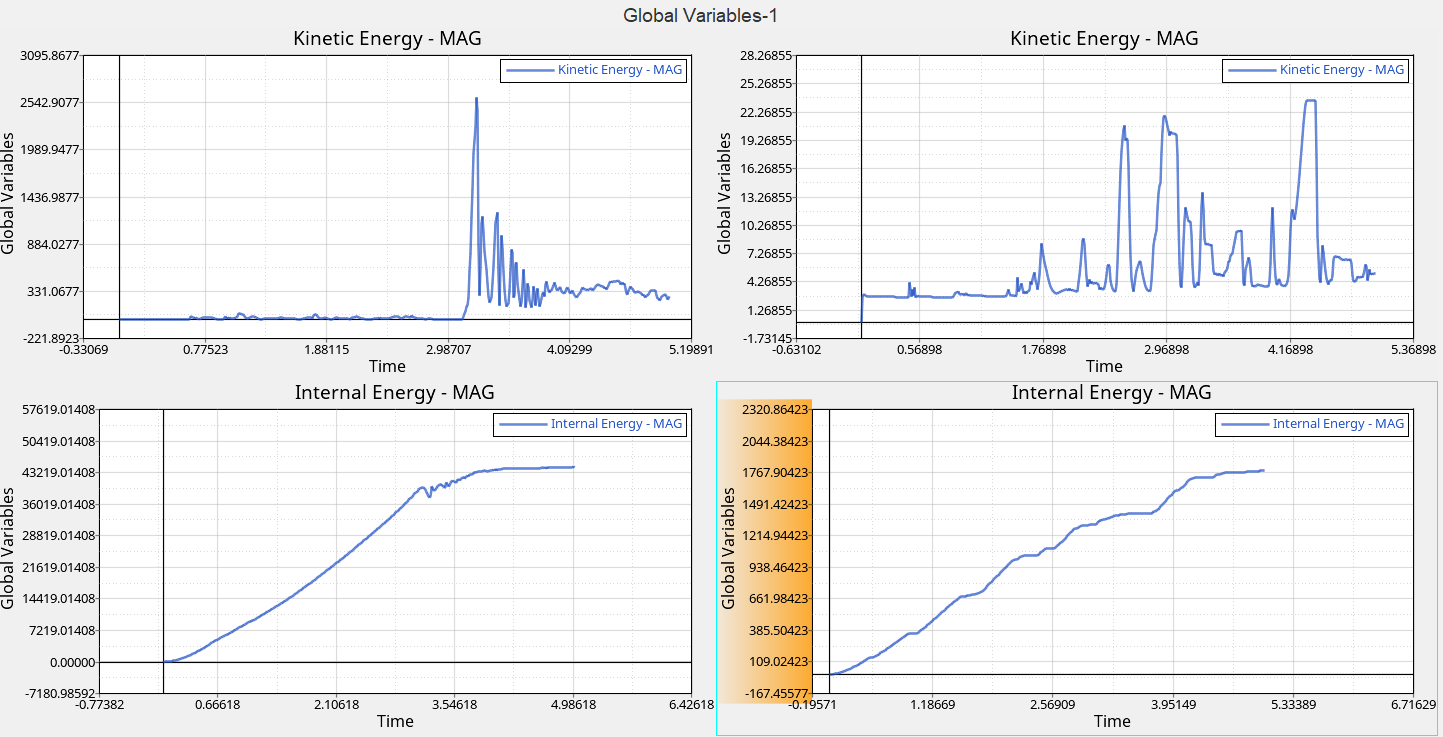 In the test curve, sudden increases in the value of kinetic energy after around 2 ms because before that it stores the internal energy by hitting of force and suddenly plate breaks down and elements distorted and kinetic energy fluctuates and decreases drastically.

But in the standard curve, If we see the scale of the Kinetic energy, it doesn't increase that much because before that the elements get deleted and another element will crack out so it fluctuates.

The table in which the number of cycles, energy error and mass error and simulation time is given for all cases.

Google drive link for all files: