The bumper is meshed with an average mesh size of 6 mm and did spot welding to join two parts of the bumper.

The mesh flow and connectivity of mesh should be good for the proper transfer of energy from one part to the other part.

We have a crash tube on which we perform crash analysis comparing the Type-7 simulation results, Type-11 along with Type-7.

4. Interface/Contact modeling means how parts interact when they come into contact with each other.

Type-7 deal with modeling contact between a master surface and a group of slave nodes with the non-linear stiffness.

The main advantage of interface type 7 is that the stiffness is not consistent and increases when the node trying to penetrate and resist from going through shell mid surface.

We have a crash tube has given, which contains two notches near to the rigid wall and having Type-7 self contact.

Model is the same as case 1, here we change to recommend parameters for contact Interface.

In this case, we create a new Contact interface Type 11.

Type-11 deals with the edge to edge contact with the non-linear stiffness. Here we define all elements are a slave and all are master as well.

Igap value changes to 0 to 3, when it is zero the gap slave and master remains constant throughout the simulation that gap is equal to gapmin. But when we take Igap is 3 the solver considers the variable gap.
The variable gap varies according to this formula:

After crumpling the penetrations of the element occurs and but in case 1 the gap doesn't change so there is less contact energy.
Contact energy follows the same behavior in all cases. As in case 1, it is less than case 2 & 3. Due to Igap= 3, more elements come under the minimum gap for impact activation. So as crash tube crumble surfaces are come in contact due to which nodes trying to penetrate into master segment then stiffness increases the oppose to penetration and at that moment the energy generates that energy is called the contact energy.

As the crash tube impacts the ground the internal energy rises. We observe in a simulation that in case 2 & 3 it rebound early from case 1 that why in case 1, it stores more energy w.r.t time.
case 2 & 3 release its internal energy while rebound.

Delete the boundary condition (which arrests translation motion of X & Y direction and Rotational motion of X, Y, Z direction) of master node of a rigid body and remove the notches & make a plane surface. All the interface parameters are the same as case 3.

In this case, boundary conditions are not there and we create a new notch in the middle & keep all other parameters the same and run the simulation.

Here, boundary conditions are not there and we delete previous case notch and create a new notch with nodes the only on opposite 2 faces and Keep all other properties the same as the previous case and run the simulation.

The Clear difference in Stress value we can see. It went decreases from case 4 to case 6. Here without Notch case 4 has higher stress value.

As all crash tubes are made up of the same material, so crash tube without notches is better because more energy it absorbs in itself less it transfer further.

We can observe that in case 6 (Opposite side notches) has higher contact energy and case 4 (crash tube without any notches) has less than case 5 & 6 both.
This is because we can say that in case 4, lesser elements come under the minimum gap compare to cases 5 & 6. So less energy is required to oppose penetration by increasing stiffness.

By this, we can conclude that a crash tube without notches is better than the other two cases 5 & 6. 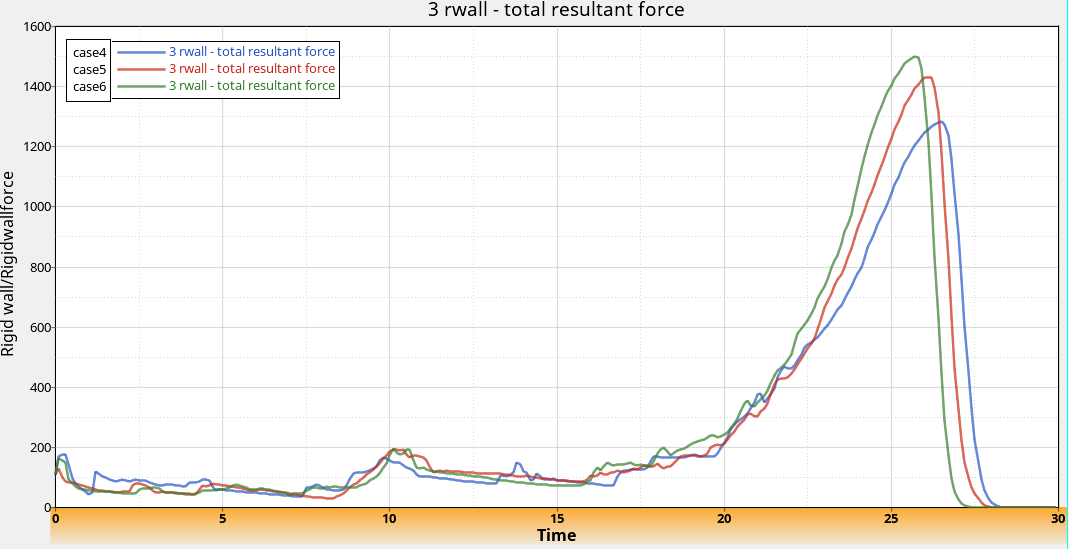 Due to the opposite side notches are present in case 6, crash tube deforms more and more the elements are colliding to the rigid wall.
Higher the rigid wall force we get, the lesser energy absorbed by the crash tube. Hence we prefer the crash tube without notches (case 4) because it absorbs more energy.

Internal energy graph for all four parts of the crash tube for case 4.

TH/part gives the time history of particularly every four parts. we can plot graphs for any part of the component and get to know the details on that particular part.