OBJECTIVE: Through this challenge, we will study different material laws in Radioss and will select the best material law for the given scenario by simulating and plotting graph.

Here both model has Johnson cook material model. Both model also has an optional Failure model.

Johnson Cook Material model: This law represents an isotropic elastic-plastic material. This model expresses material stress as a function of strain,strain rate and temperature. A built-in criterion based on the maximum plastic strain is available.

In case1 Ixfem=0 and dadv=0.In case2 Ixfem =1 and Dadv=1.Ixfem decides how we want to fail the material. Default(0) will delete the whole element without cracking element.Ixfem(1) will first crack the element and then deletes.

Dadv is for crack advancement. This is only active when Ixfem =1.

Ixfem is available only for failure card. For using Ixfem material model has to be very accurate.Ixfem is best for small deformations. 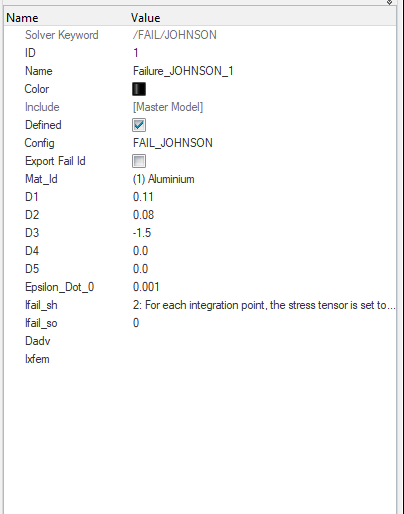 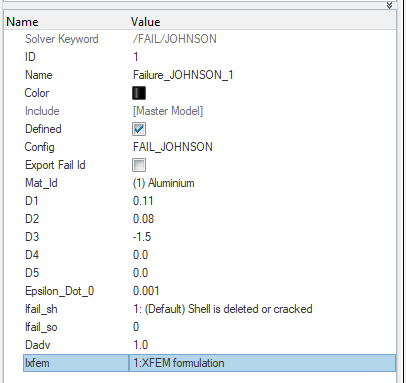 In case1 elements are deleted without crack formation. In case2 first element are cracked and then deleted. Due to this, there is delay in element deletion in case2.

Stress generation in case1 is less compared to case2.In case2 the element is first cracked and then deleted.

Before element deletion, internal energy increases linearly. This increase is due to the formation of strain energy in both cases.

Due to the QEPH  element with inbuilt hourglass stabilization, HG energy is zero. The total energy is almost equal to internal energy.

In this case, first, we deleted Fail Johnson card.In case 3 eps_p_max was 0.151.This means the element will fail when any element reaches a strain of 15% of plastic strain.

In case4 since eps_p_max is zero, there is no deletion of the elements. Elements can go an infinite amount of deformation.

Since elements are deleted, there is less stress generated in case 3 compared to case4.

In both cases there is an exponential increase of IE, but in case3 IE almost becomes constant once middle elements are deleted. After that, there is a very small increase in IE. In case 4, IE will increase until the defined runtime.

For kinetic energy plot, we see in case 4 it is almost constant and in case3 when there is deletion of elements, there is a sudden incraese in kinetic energy. 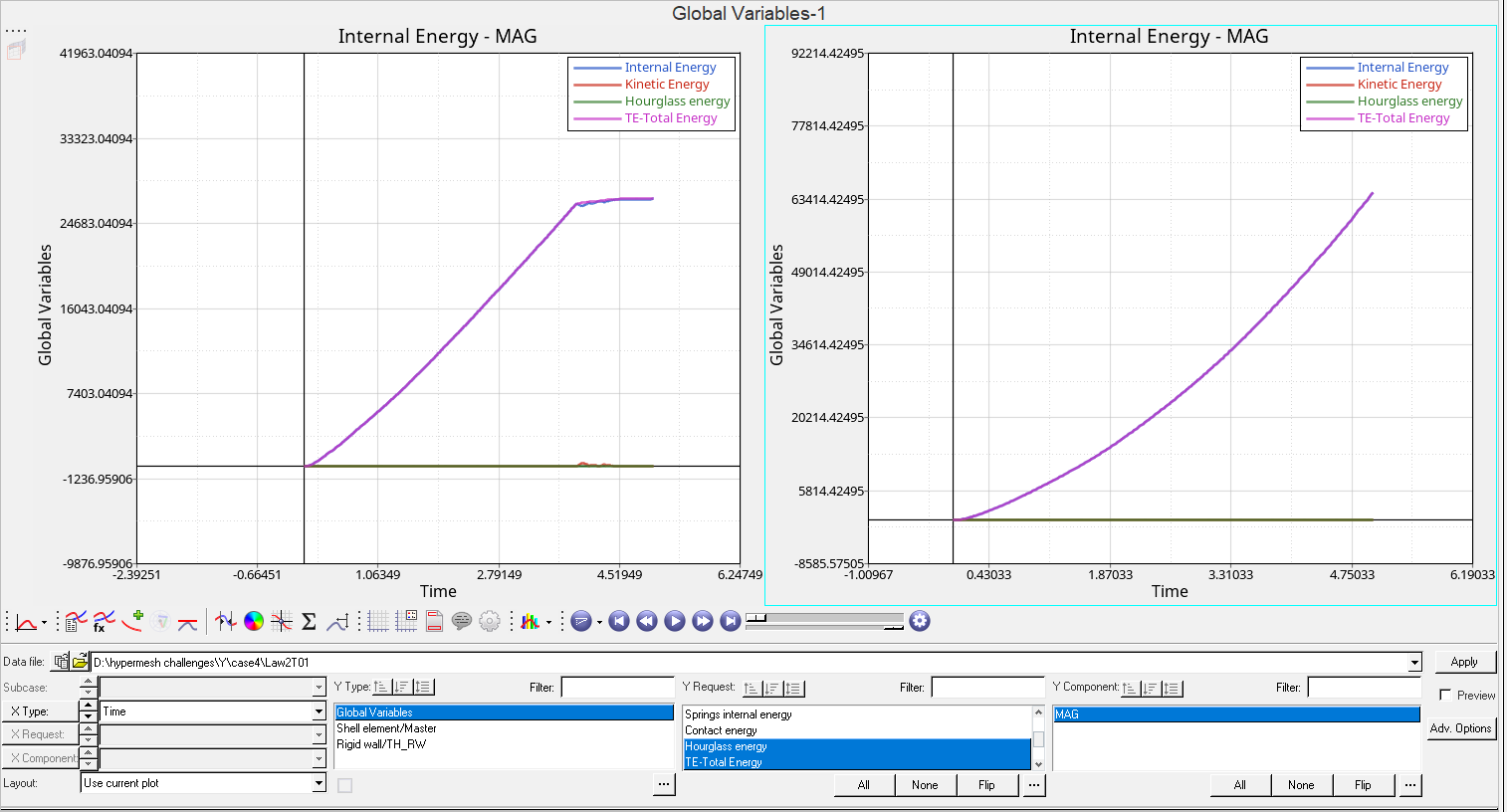 To define elasticity(Law1), we have to define three parameters:

Law 1 should not be used for parts undergoing large deformation.

For crash analysis, elastic material should be avoided.

The elastic deformation is temporary and is fully recovered when the load is removed.

In ductile material, there is extensive deformation and energy absorption before fracture. This energy is stored in the form of internal energy which will be removed as the material goes to its original form.

This law combines an isotropic elastoplastic Johnson-Cook material model with an orthotropic brittle failure model. Material damage is accounted for prior to failure. Failure and damage occur only in tension. This law is applicable only for shells. 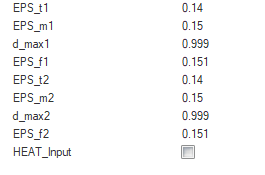 EPS_t1 >tensile plastic strain in material =0.14,stress will start to come down to zero.

EPS_m1=0.15>tensile stress comes down to zero at this plastic strain value.

EPS_f1=0.15> when plastic strain reaches this value, elements are deleted.

The material breaks once EPS_F1=0.151 and this breaking take place like breaking of glass.

Total energy is almost equal to internal energy and HG energy is zero due to QEPH elements.

Available for both shell and brick elements.

Elastic portion is defined by Young's modulus, Poisson ratio, and density. We need this law because, in a real-time model, we don't know the actual yield point.

Before doing simulation, the material was created using a user-defined function. 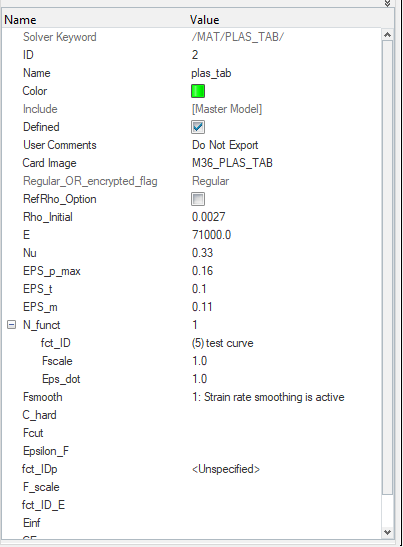 EPS_p_max:0.16> elements are deleted when strain reaches this value.

EPS_m:0.11 >when tensile plastic strain in material is 0.11, stress in element become zero. 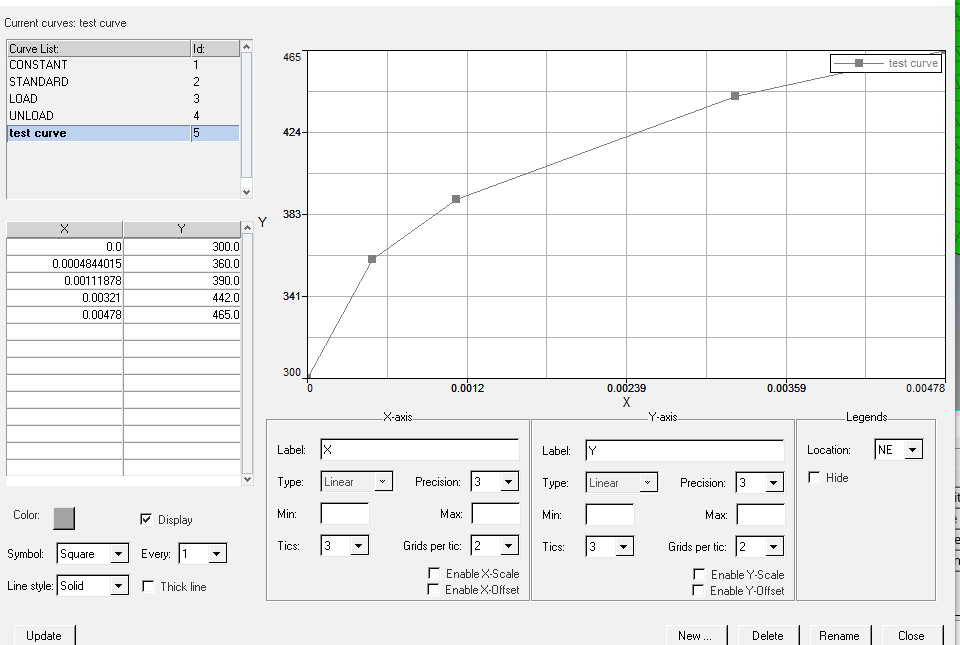 After assigning material, simulation is performed. 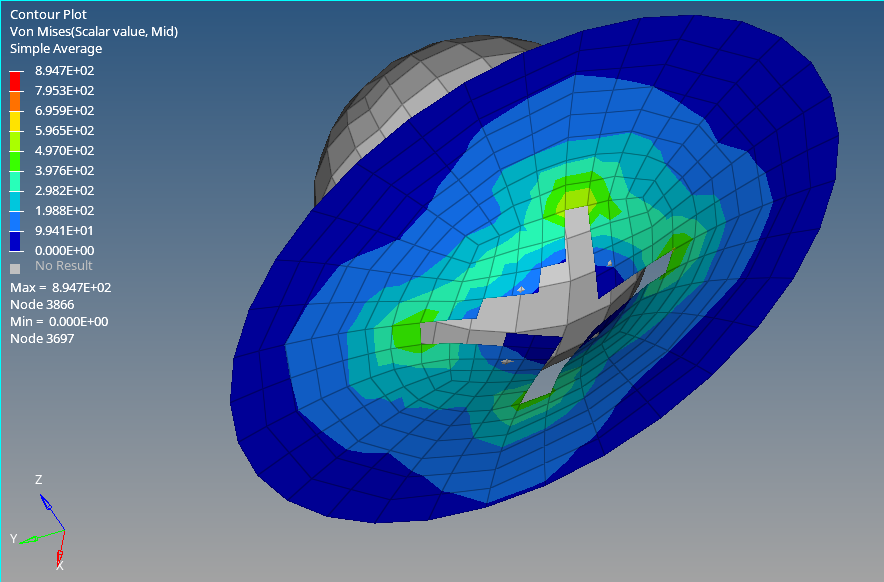 COMPARISON OF ALL SEVEN CASES

Law 1 is used to model purely elastic materials or materials that remain in the elastic range. To model this we require Poisson's ratio and Young's modulus. This law represents a linear relationship between stress and strain.

Law 36:The elastic-plastic behavior of isotropic material is modeled with user-defined functions. The stress-strain curve is modeled using E and Poisson's ratio. The hardening behavior of the material is defined in the function of plastic strain for a given strain rate.