Using the crash beam file, Comparison of simulation results of the base setup and improved shell element properties.

1.Using the crash beam file and change the run time to 55 ms.

2. Change the number of animation steps during simulation to a minimum of 25 and maximum of 60.

3. Run the base simulation without any modification to element properties.

4. At the end of the simulation, do the energy error and mass error checks and determine whether results would be acceptable.

6. Change all the shell elements properties to recommended properties, save this as separate, rad files and run the simulation.

8. Create a brief report comparing all the results from steps 5 and 6 for both simulations.

1. Import the '0000' data file which is in the RAD file format into Hypermesh Radioss by using the Import button.
For a proper view, enable shaded element and mesh line icon.

2. Get the Solver window and make the change into the run time to 55 ms by the following:
View ->browser -> Hypermesh -> solver -> Engine keywords -> Run -> Tstop = 55
It automatically takes in ms because in RAD file default unit is ms mentioned.
Tstop is the final time for run.

3. For changing no. of animation steps during simulation to 25.

As our runtime is 55 and we need 25 animation steps.
By using this formula, We get the value of frequency which is equal to 2.2.

We change this time-frequency value in the Solver window under the ANIM/DT we can change the value of Tfreq to 2.2

After that, we can run the base simulation without any modification to element properties. From Analysis -> Radioss. Put no. of threads is "-nt 4" for fast processing and run.
25 files are generating in the same folder where data file and engine file kept.

By this, we can open an animation file in Hyperview and Here we can change result type Displacement to Von mises Stress under the Contour option.

Fig. Simulation 1 without any modification to element properties.

##Now we open a new file and change all the shell elements properties to recommended properties, save this as separate, rad files and run the simulation and compare simultaneously both the results and we name as "Simulation 1" and "Simulation 2".##

Have a look at some properties which we have to change in the new file and create simulation 2.

It can be done by opening Engine OUT file (0001 OUT file) in Notepad. There we can see in both screenshots.

Here we can see that Energy errors start from 0.0% and go up to -10.3% and mass error are same throughout.

We get '-ve' energy values because here energy gets dissipated while it moves from one point to another point. The value of energy error % is accepted from -15% to 0%.

After changing some properties, Hourglass deformation happening some damping applied & because of that deformation will stabilize and it will try to control the speed at which the deformation is happening. That is why we get fewer errors in Simulation 2.

If the error is positive, there is an energy creation. If the positive energy error is high, the source of this energy has to be identified. Normally, the energy error must be negative and decreasing.

Now we compare for the graphs in details which we get.

Internal Energy
It keeps on increasing in both the Simulation as kinetic energy decreases as we know Total resultant force keeps on decreasing also. In simulation 2nd it increases little faster as the elements having more stiffness.

Hourglass Energy: It is zero energy deformation mode where elements are seen to being deformed but there is no energy recorded for particular deformation. Hourglass energy is artificial energy it doesn't exist in nature it neither kinetic nor internal energy, it's an energy which is actually a loss of both energy.
For Simulation 1st, Its keeps on increasing but it always below from internal energy But for Simulation 2nd it just sticks to zero it doesn't increase with time.
It's because the Hourglass energy opposes the only velocity of nodes but not the force that is why when force is introduced, we add some stiffness (young modulus, yield stress) and that stiffness going to control hourglass energy.

Contact Energy is not equal to zero but nearly equal to the zero throughout the process in both the simulations.

Now we plot graphs of the Rigid Wall Forces and compare it properly. 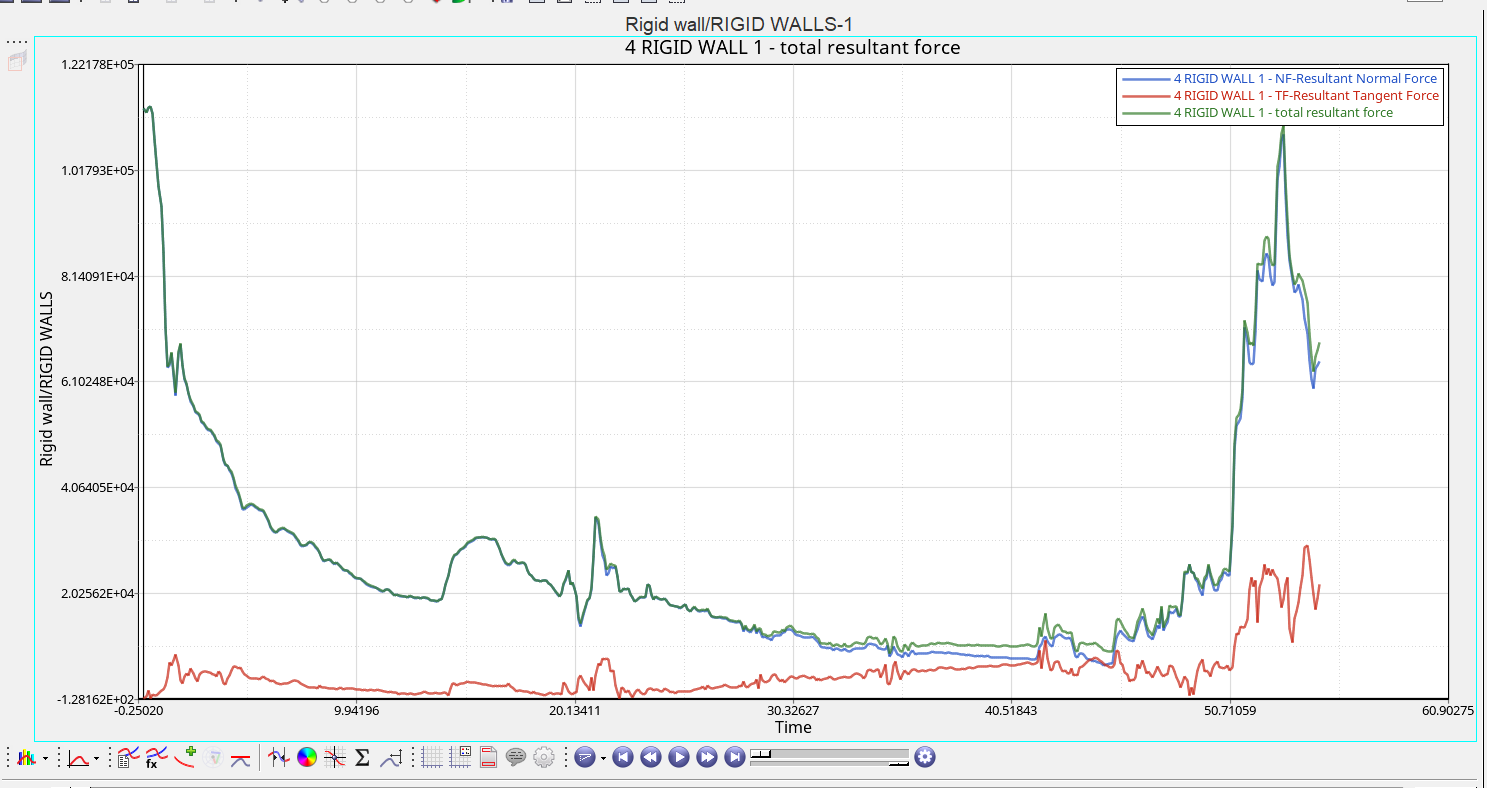 For Resultant normal forces At the initial stage when the first impact happen there was a huge force and after that, the internal deformation inside the crushed beam started and the force is going to convert into frictional force.

The frictional force is nothing but it is a resultant tangent force in the graph. At initial condition, its nearly equal to zero but later on it started increasing. As the beam deformed the contact area increases and frictional force also increases.

Total Resultant forces for both the forces (normal forces & tangent force) and they are nearly equal to the normal forces.
We can see the basic drastic difference between the simulation 1st & simulation 2nd is Total resultant force and normal force is suddenly increases after some certain time. This is because of the middle portion of the beam is buckle and hit on the wall. That why all three forces are again increased. This we can see easily in our animation.