The given Bumper is meshed under given conditions. 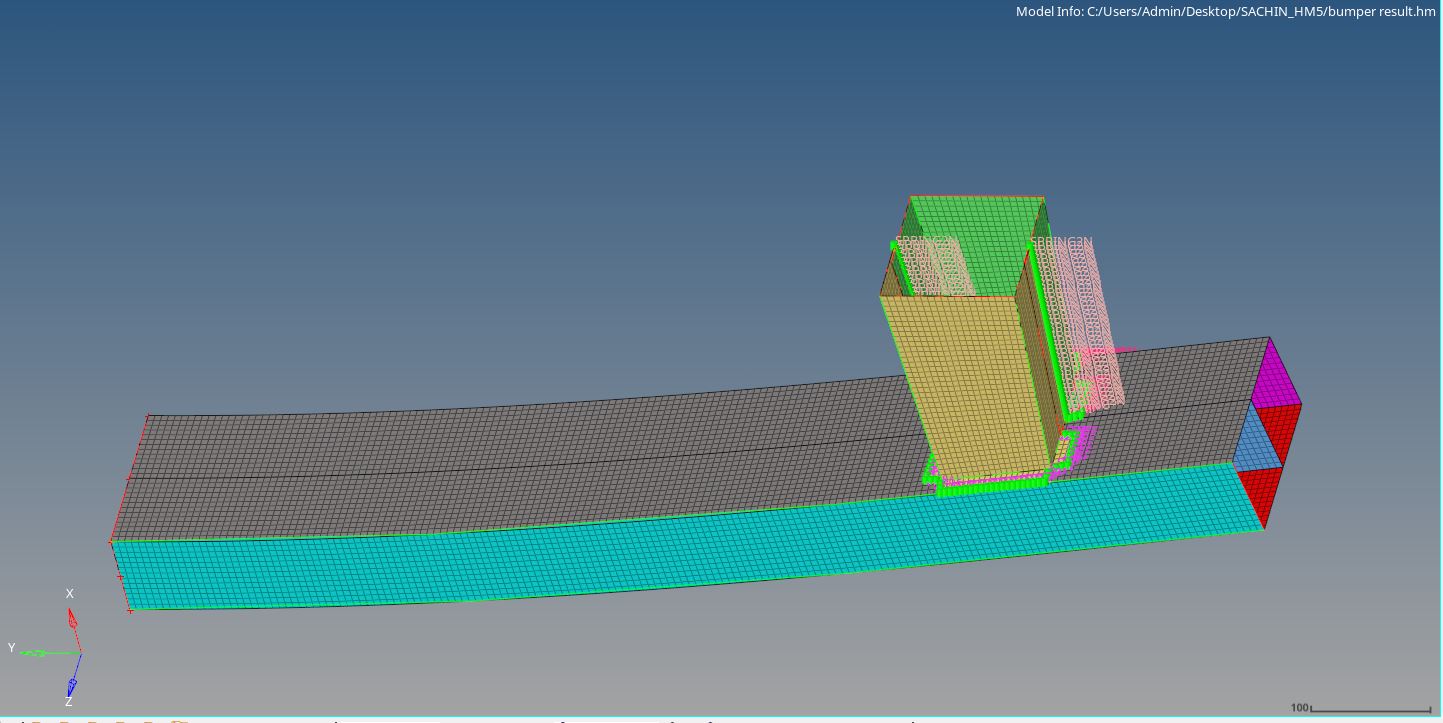 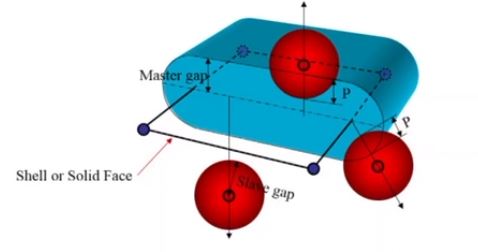 gm=t/2 , t is the thickness of the master element for shell element.

gs=0, if the slave node is not connected to any element

gs=t/2, t is the largest thickness of the shell element connected to the slave node

The important interface parameters are

If there is a penetration, there is always the corresponding generation of resistive force.

The resistive force is non-linear with respect to the penetration of the slave node into the gap and is a function of value and time. 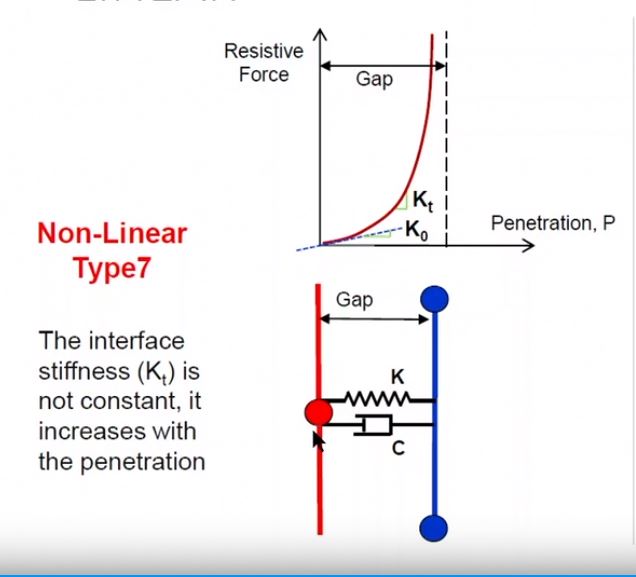 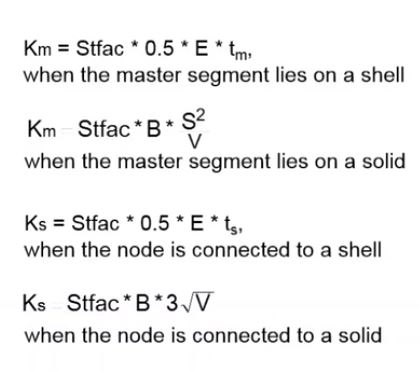 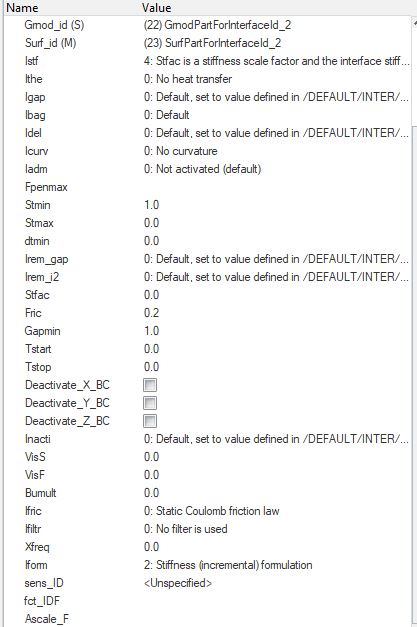 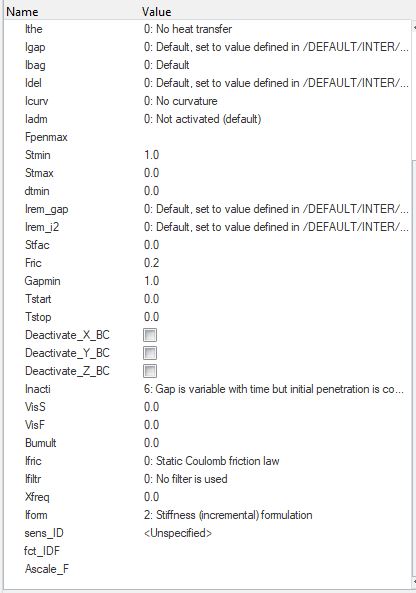 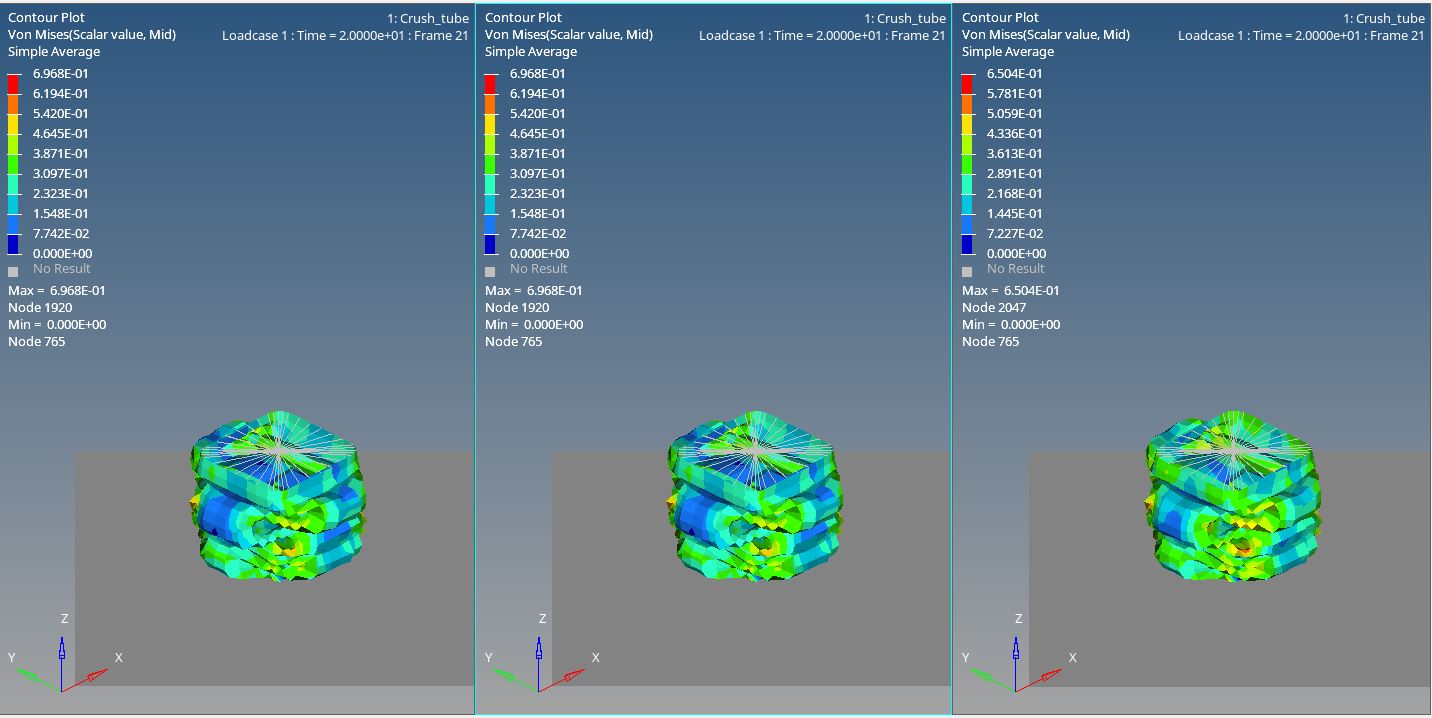 From the above simulation, we can able to see the changes that after assigning the values for Igap, the max stress values is reduced. This is due to less strain and deformation.

The stress is reduced because of the initial penetration is also taken into consideration. The Igap does the scaling accordingly and less resistive force is applied.

The rigid wall forces are more for the TYPE2( recom values) compared to the other because of more reaction force has been offered by the rigid wall. This is due to the Sliding factor and also due to the setting of Igap=3. Thus creating more resistive force offered by the solver. The Type 2(recom value) is almost similar but at the time 0f 17milliseconds, The upper part of the crash tube is getting crashed and hence resulting in the more reaction force of the wall because there is no notch to observe energy. Wherever there is a notch, it produces less Rwall forces compared to the other parts of the component. 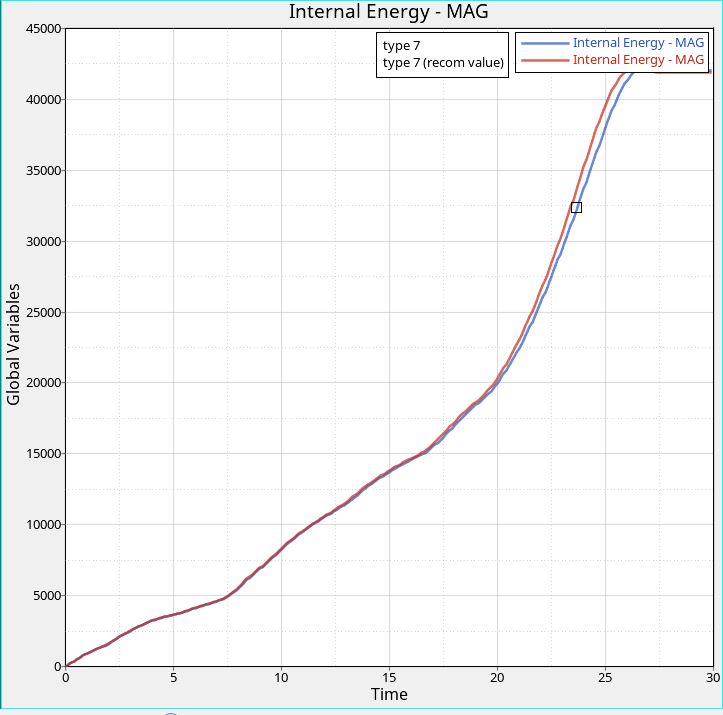 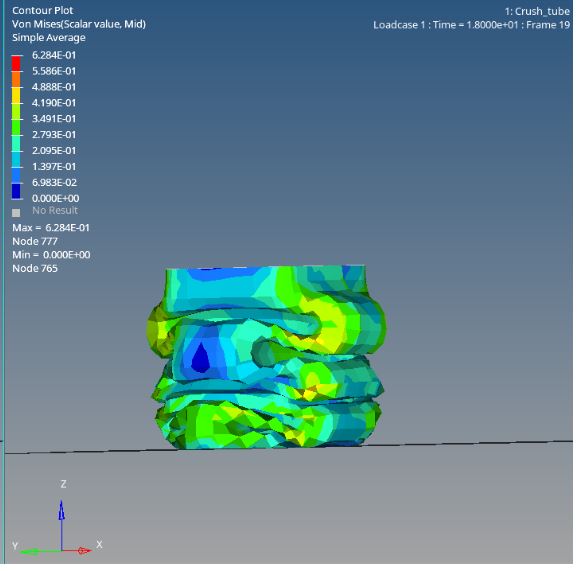 The max stress-induced is 0.628 N/mm^2. Thus the stress is further reduced due to the parameters assigned which it just reacts whenever the edge of slave and master comes in contact, thus always gives the resistive force. and the time is reduced to 18 milliseconds. Thus the reaction is fast compared to the previous cases. This is because of the edge to edge contact and also increase in the stiffness of the material. 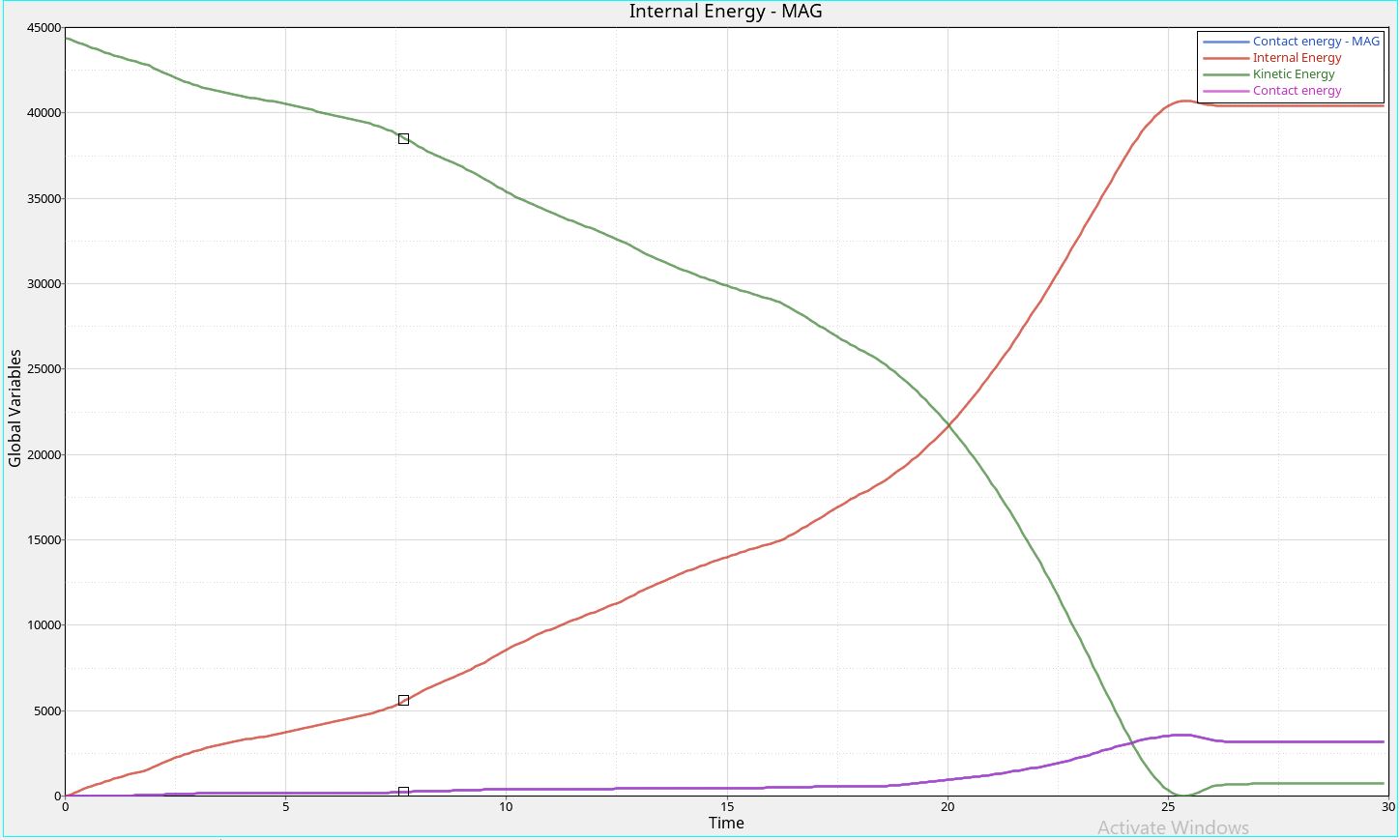 The kinetic energy is high at the start due to the motion of the elements and keeps reducing due to the impact of the tube through the wall. Thus at the time of 23milliseconds, the crash tube gets fully deformed and increase due to the reaction force offered by the wall.

The internal energy ascending till the time of 25 milliseconds and constant thus all there is no impact or no resultant force. 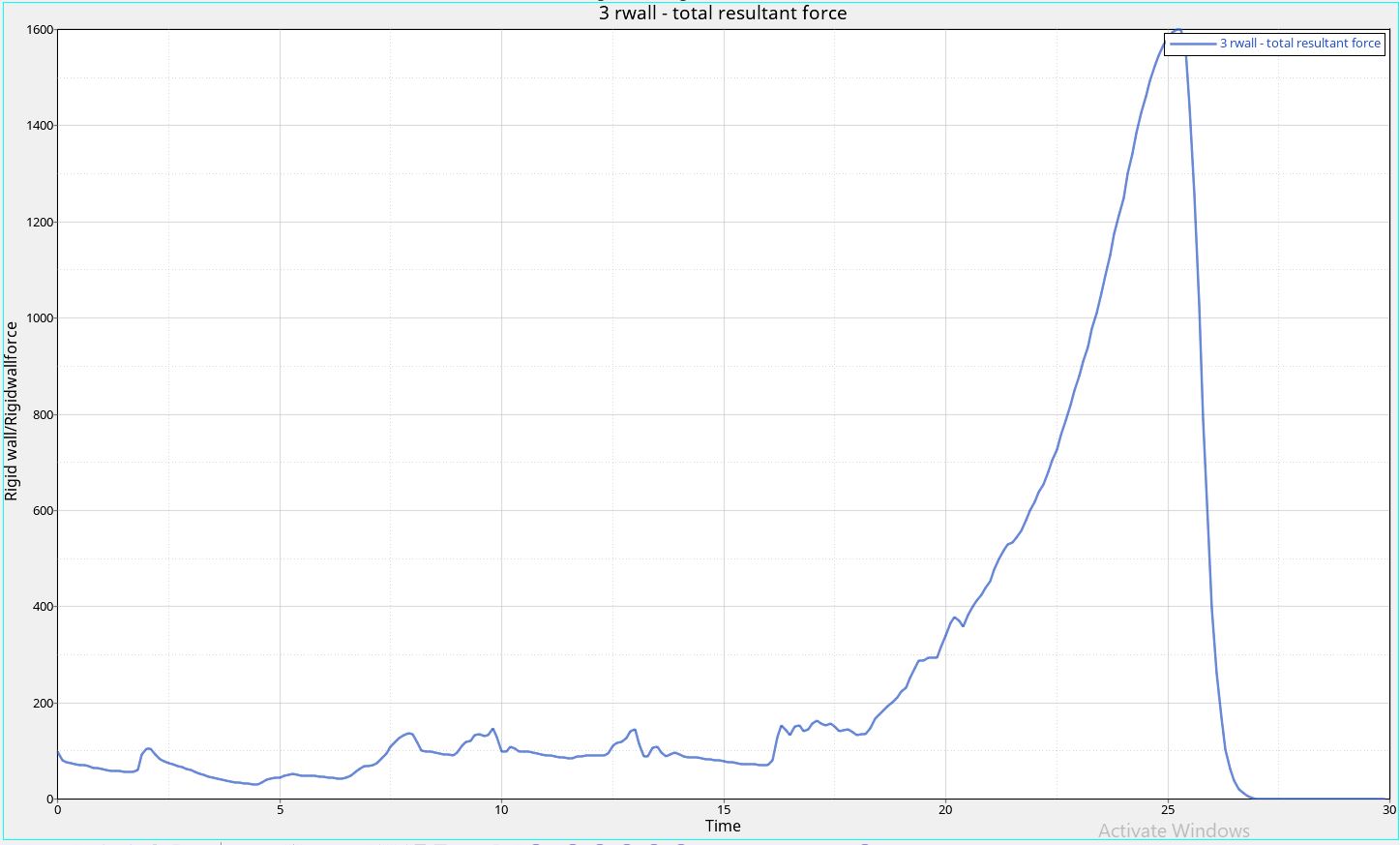 This is Rwall force shows hike is when the contact between the crash tube and the rigid wall is induced. This Rigid wall gives reaction force thus creating the spike. At the time of 20 milliseconds, the Rwall forces increase because the crash tube is completely deformed and more force is acting towards the Rigidwall thus putting the total weight into the Rigid wall.

Comparison between No Notch, Middle Notch, and Opp Face Notch :

The simulation is executed and the following changes have been recorded.

With No Notch-- The maximum stress induces is 0.672 N/mm^2. This is because of no presence of a notch, the part gets bent and undergoes more stress compared to the other elements.

With Middle Notch-- Due to the presence of the notch the element undergoes deformation in the notch region and gradually transferring the stress to the other element. At the notch, the stress is concentrated. The max stress in the element is the 0.61N/mm^2

No Notch -- The internal energy is high at the start due to the absence of the notch and gradually increases throughout the impact.

Middle Notch-- The internal energy is less at start increasing and the hike is there at the time of 10 milliseconds. It is due to the presence of a notch.

End Notch-- The internal energy keeps on increasing till the time of 25 milliseconds and constant that is where the impact comes to and end remains constant throughout. 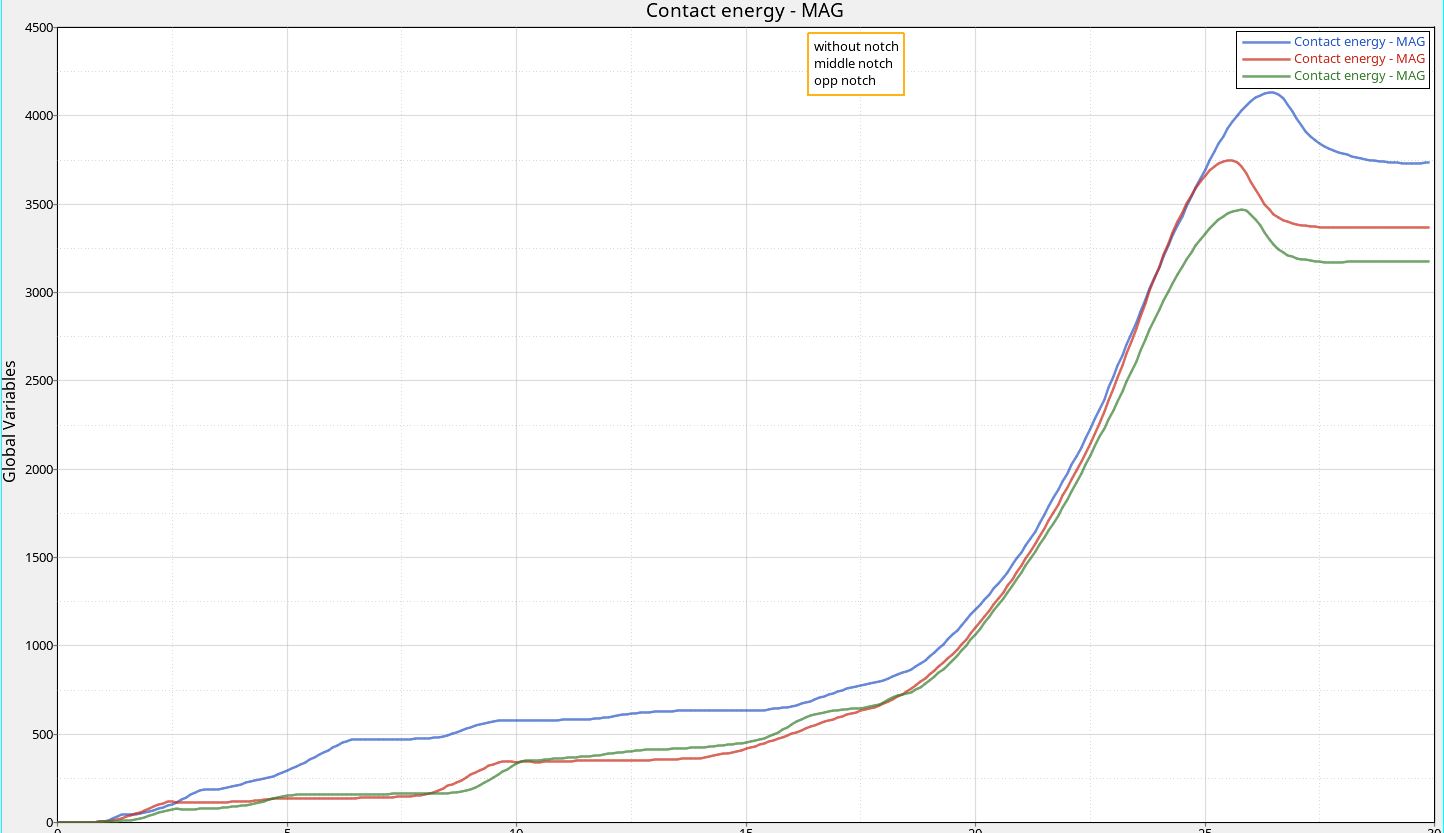 With Middle Notch-- The spike is due to the contact of elements in the folding region. and increases but less compared to the previous case.

With Opp Notch -- Since there is a tch at the opp face, the element gets contacted more at the start but at the end, only a few elements are getting contacted resulting in fewer energy errors. This also because the element is stiffer.

With Middle Notch --- At the time of 9.6 milliseconds, there is a hike in the graph because it is due to the lower portion of the below notch is absorbed more energy and started deforming and thus applying more stress against the rigid wall.

With Opp Notch  ---   It is as same as the middle notch where the notch area is deformed earlier and opposing the more stress transferred to the rigid wall and almost tracing the curve of middle notch.

TH part for middle notch and No notch

The internal energy has been observed for the particular parts and the following observation has been made. 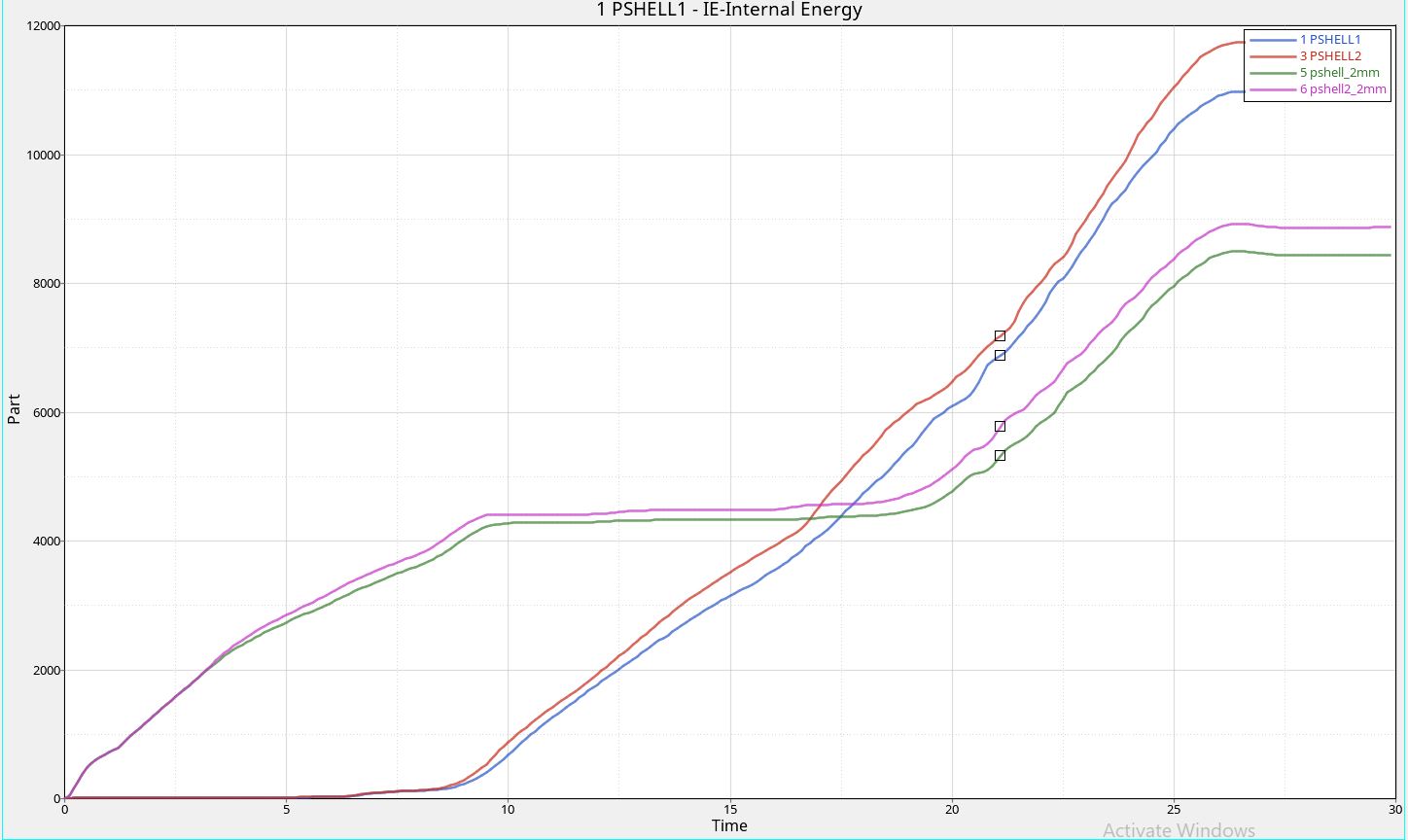