Efficiently combining heat transfer in fluids and solids is the key to designing effective coolers, heaters, or heat exchangers.

The fluid usually plays the role of energy carrier on large distances. Forced convection is the most common way to achieve a high heat transfer rate. In some applications, the performances are further improved by combining convection with phase change (for example liquid water to vapor phase change).

Even so, solids are also needed, in particular, to separate fluids in a heat exchanger so that fluids exchange energy without being mixed.

There are many areas of application like heat exchanger, HVAC systems, Exhaust ports etc. 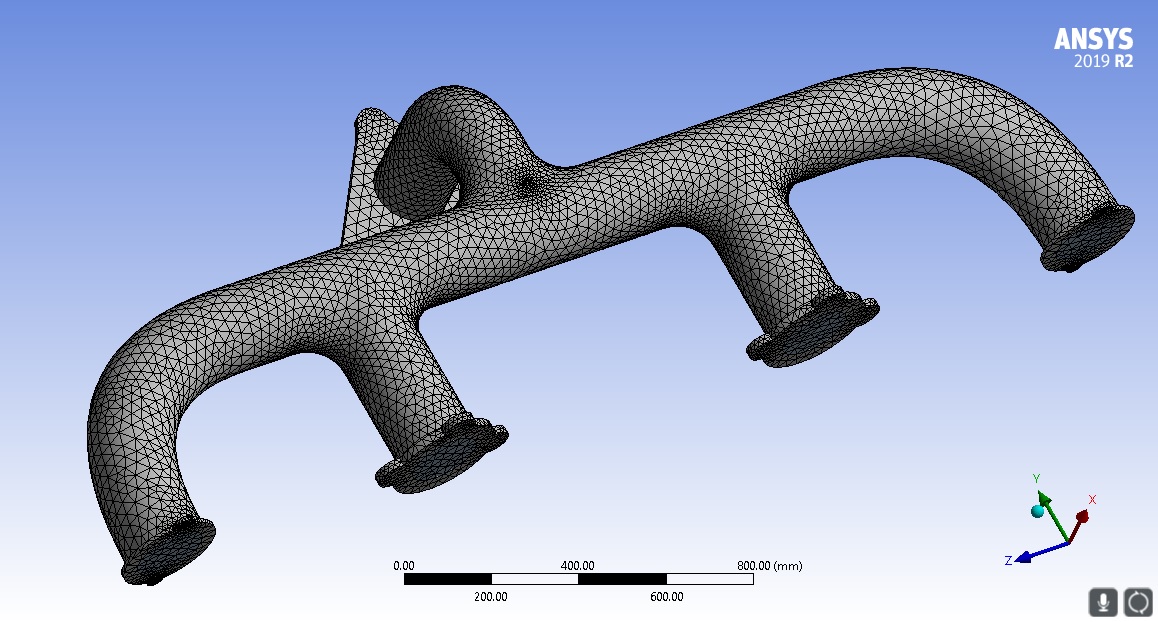 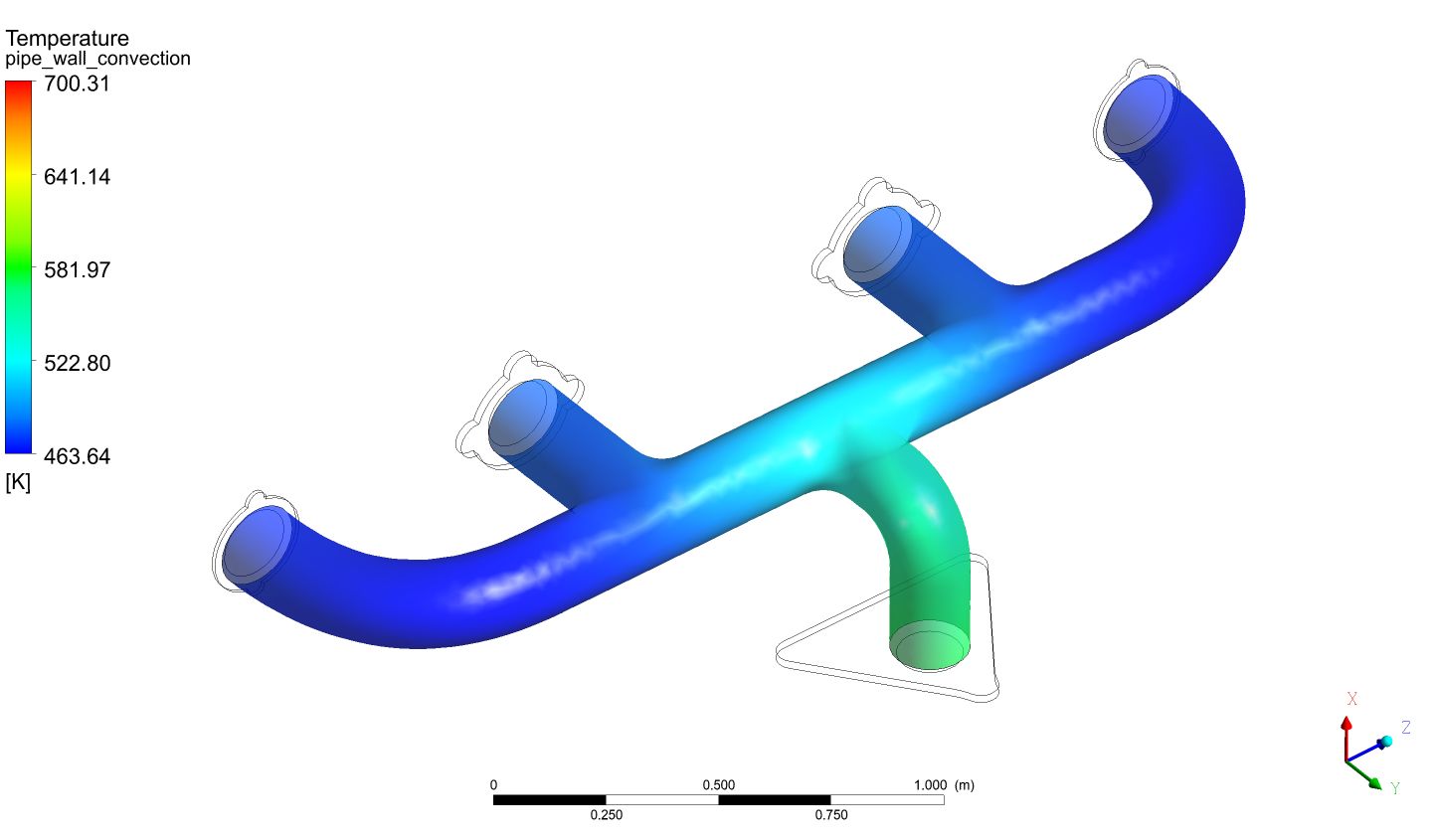 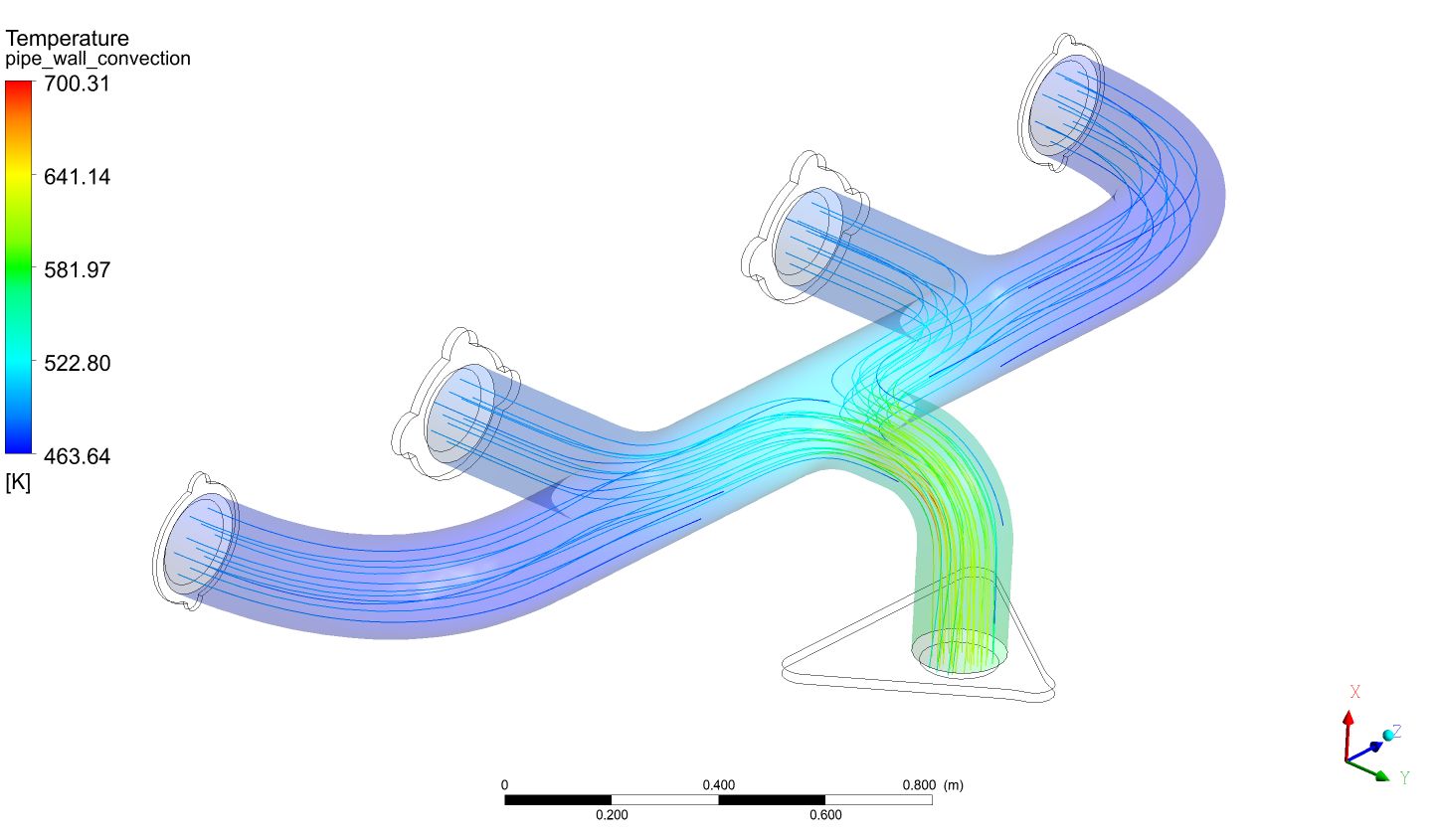 It can be seen that due to the continuity equation the velocity at the outlet increases significantly. 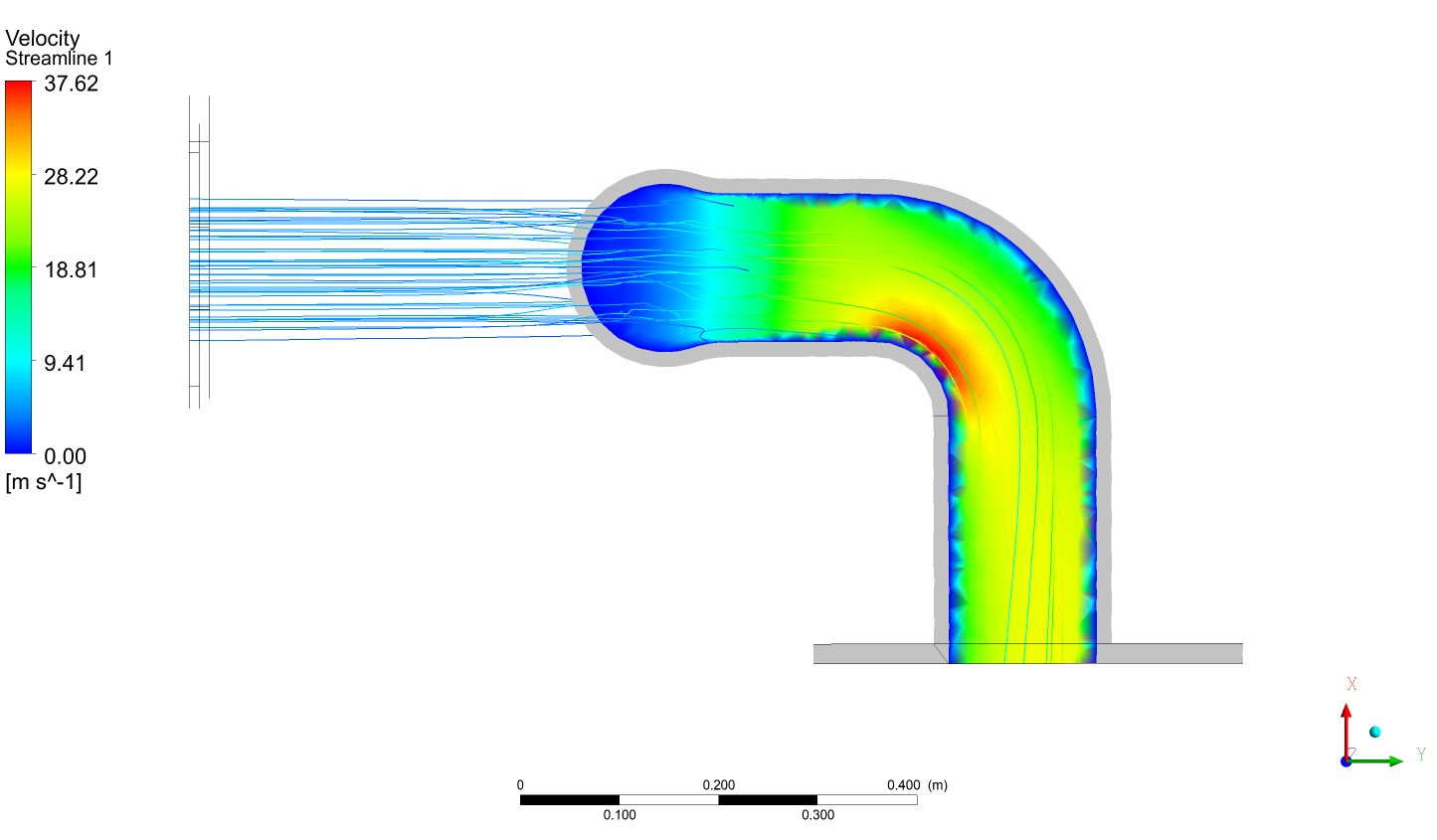 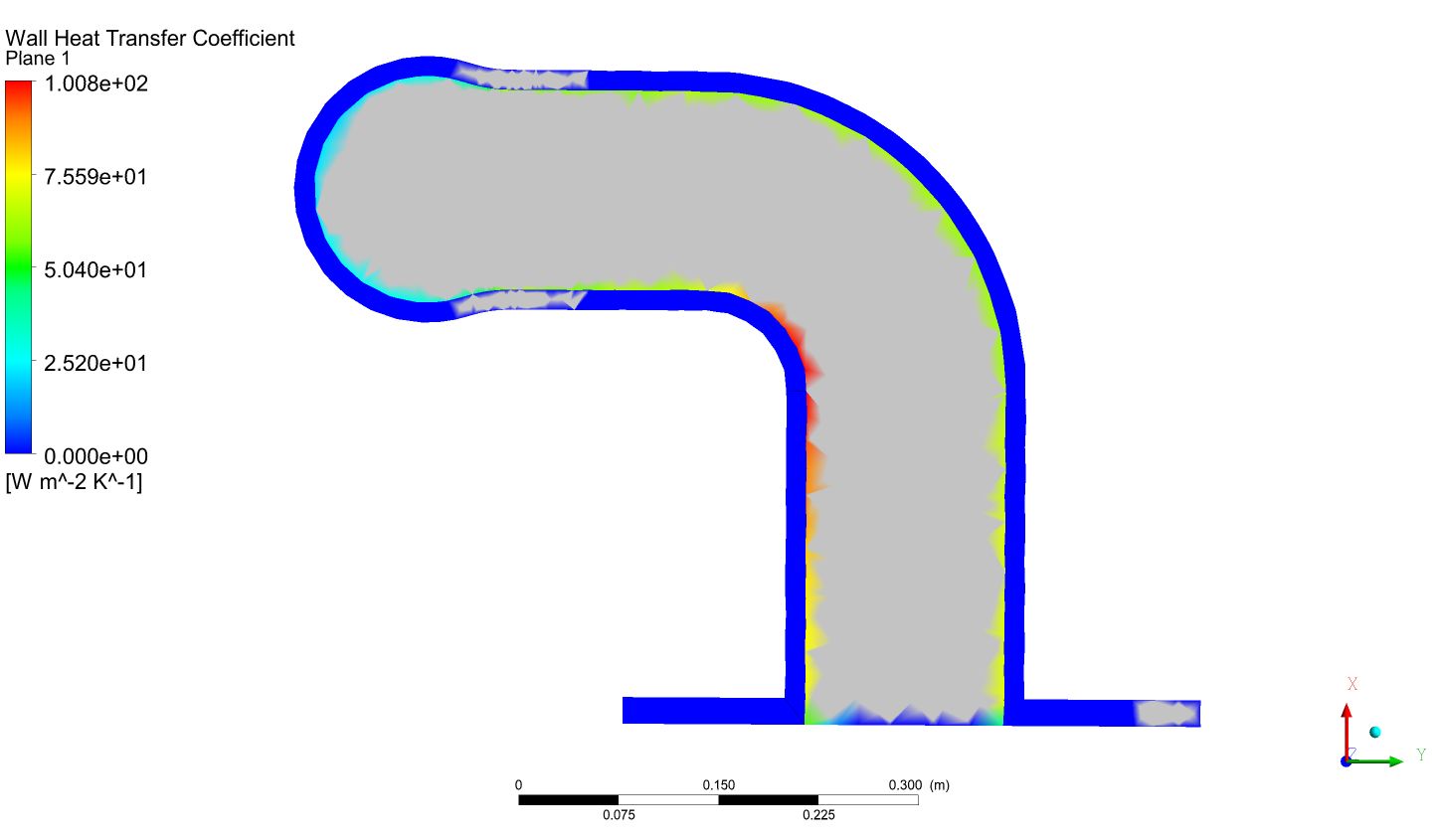 In the above figure, we cannot get clear idea of HTC as it is found only on wall and our mesh is not refined enough to give us the clear picture. Although all the results are good enough but to get boundary values we must ensure body-fitted mesh. 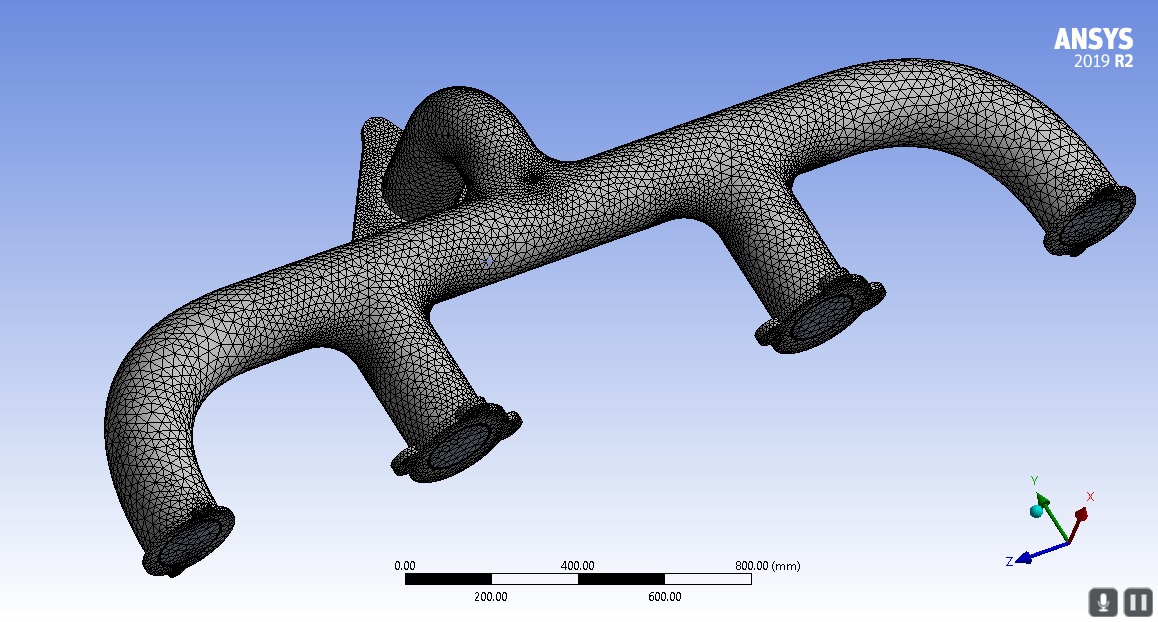 An inflation layer was added to capture the boundary phenomenons 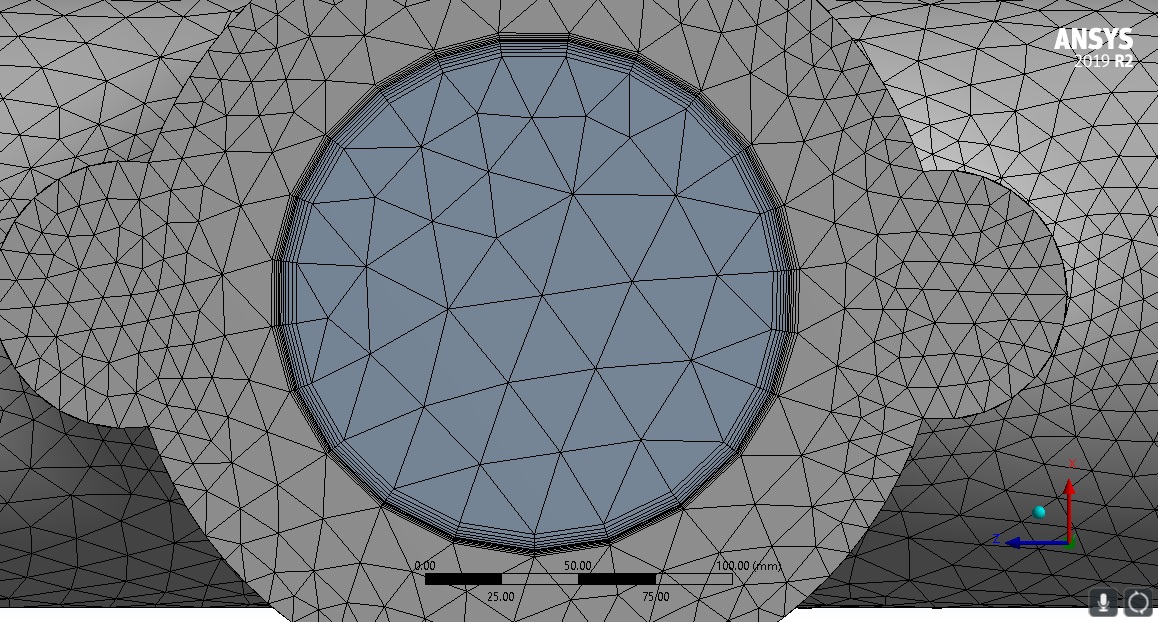 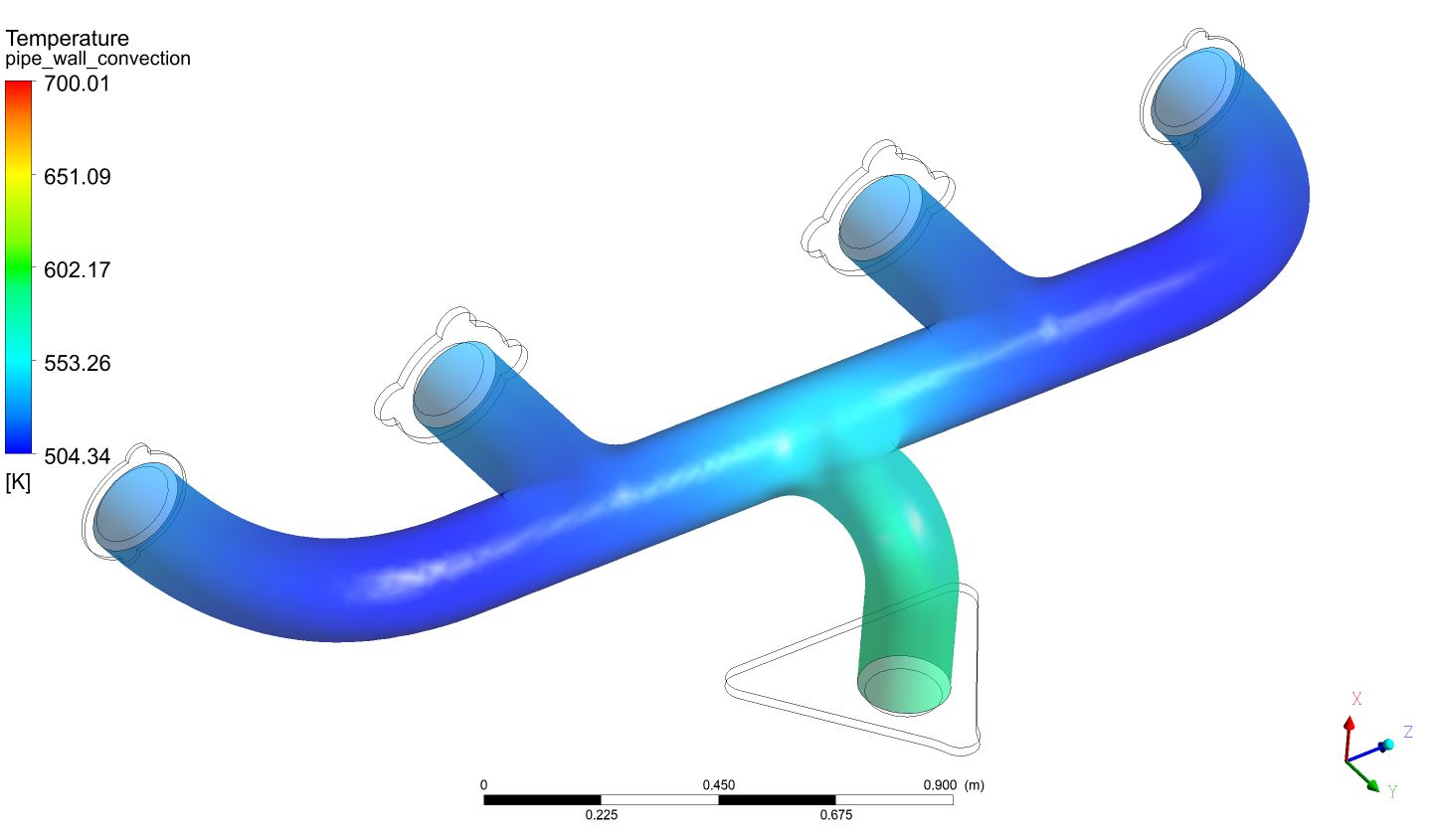 Not much difference can be seen in the temperature distribution as well as velocity variation in both the cases. 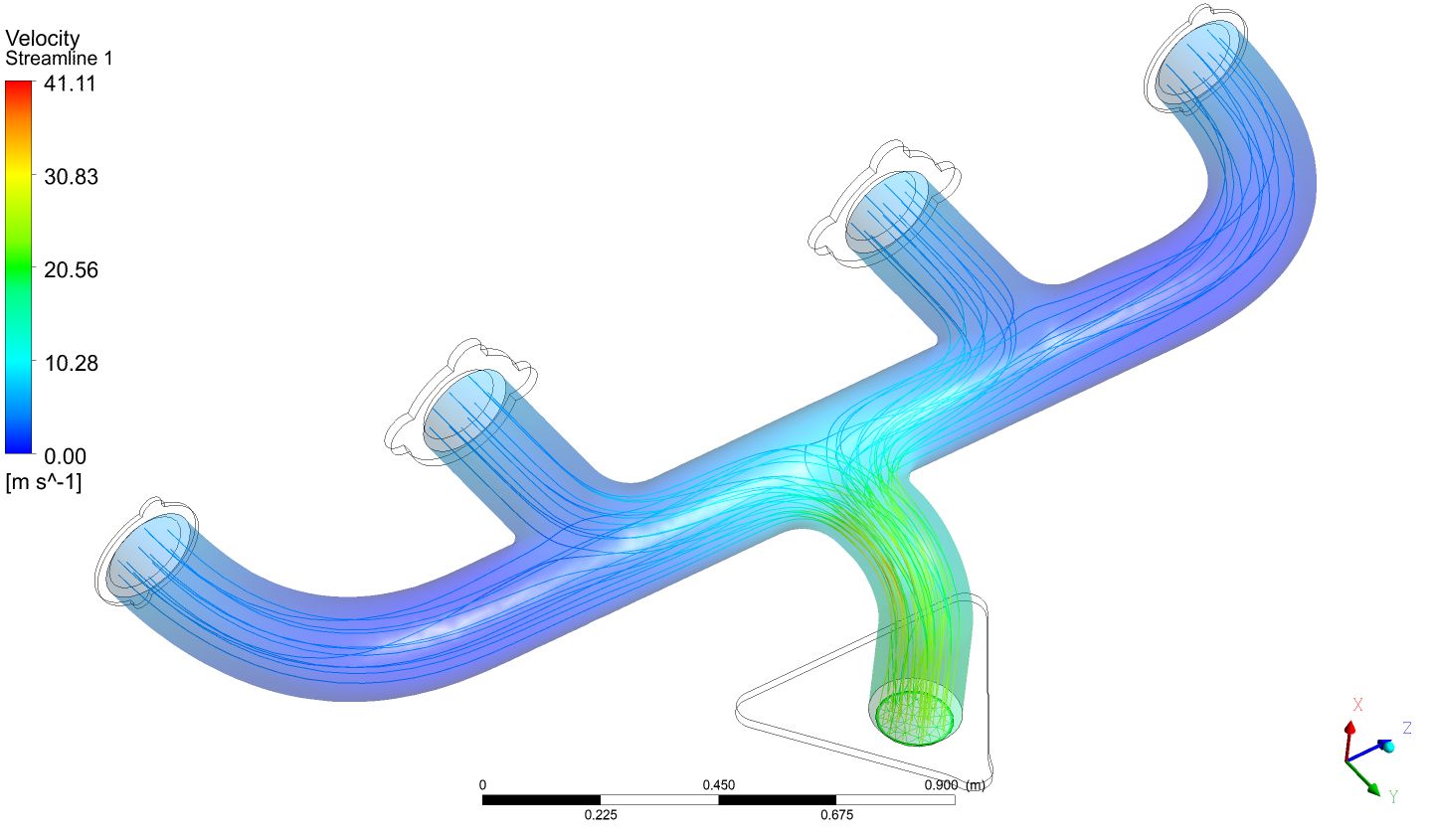 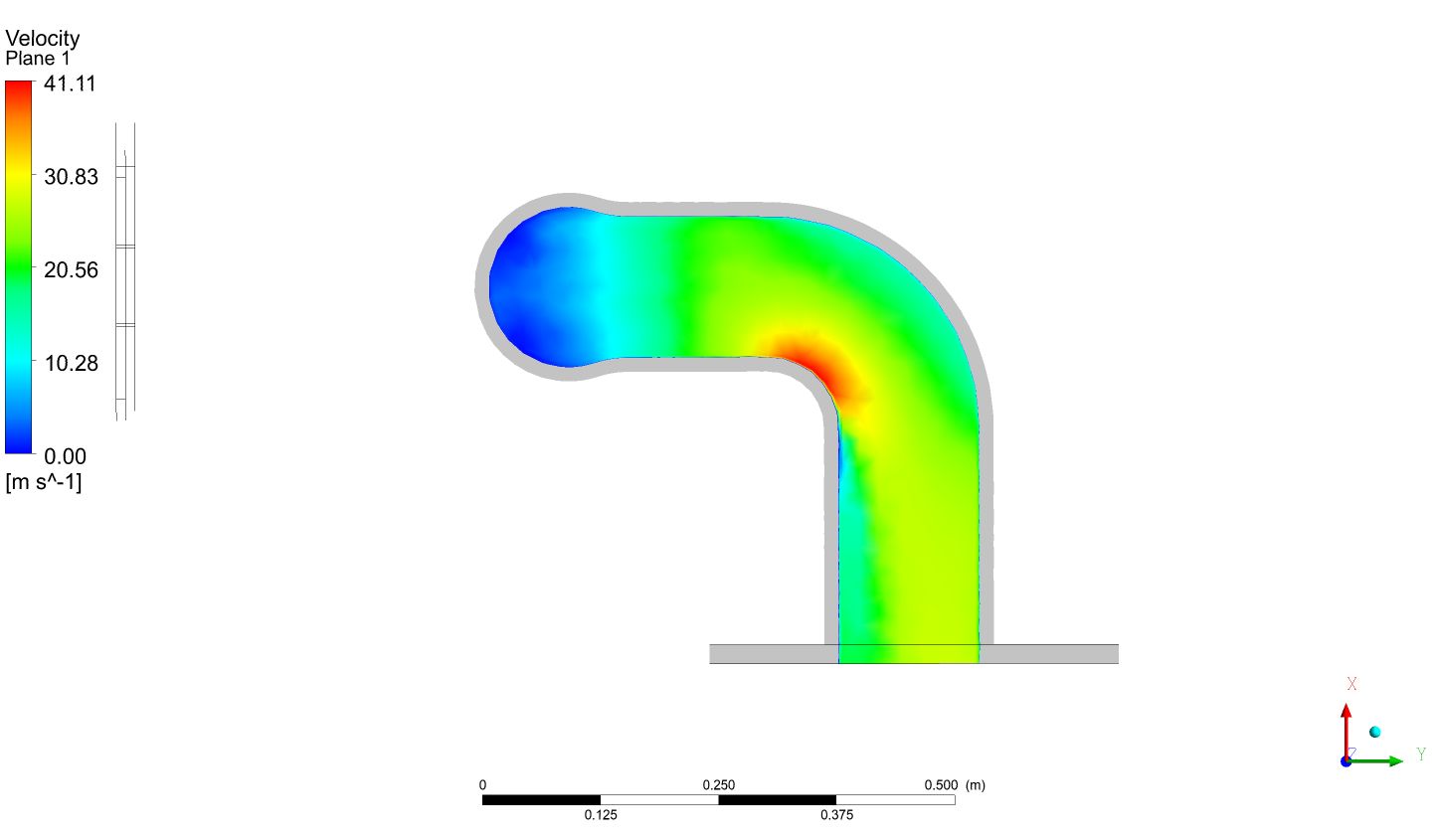 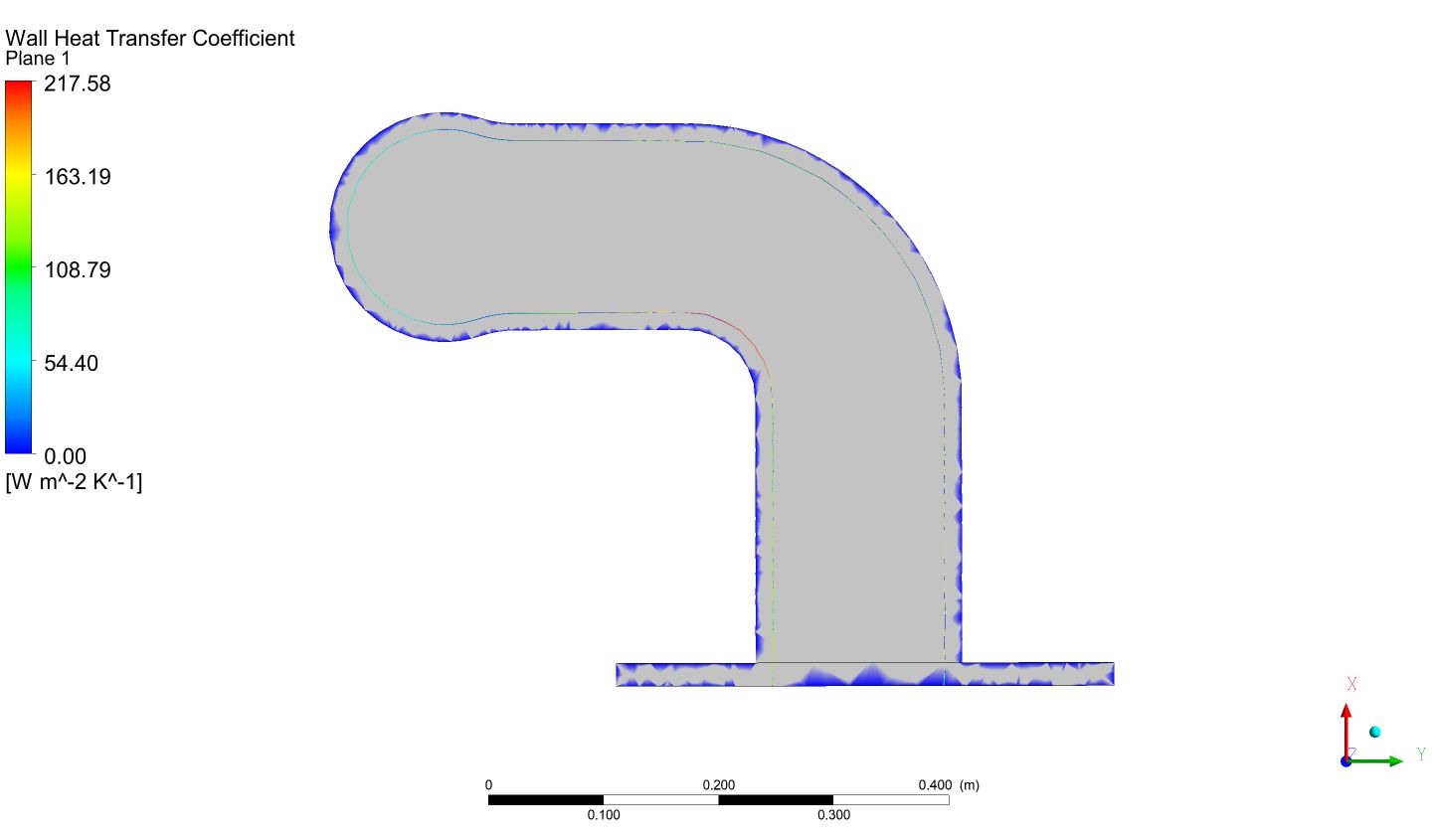 In this figure above, we can clearly see the HTC are much better as we have provided an inflation layer which helps in capturing boundary phenomenons clearly.

From the figures shown above for Case 1 and 2, we can see that the results of HTC in case 1 are very coarse and no proper visualization of HTC can be done. Whereas, in case 2 due to inflation layers we have captured the phenomenon very clearly.

In case 2 we can see that we are having a maximum velocity at the lower bend of the outlet. Higher velocity leads to high Reynold No. and we know that Reynold No. is directly proportional to the heat transfer coefficient. By this fact we can see that our model is behaving exactly as it should be thus, it validates our model.

For further validation, the values of HTC can be compared with either analytical or experimental values.

Introduction: The four models used for cyclone separator are: Iozia and Leith model: This model assumes that a particle carried by the vortex endures the influence of two forces; centrifugal and flow resistance. It considers simple force balance on the particle in t Read more

A gate valve, also called sluice valve, is a valve used to isolate the flow in pipeline. They are controlled either by clockwise rotation to close (CTC) or clockwise to open (CTO) rotating stem. When operating the valve the gate Read more

Introduction: Rayleigh Taylor instability is observed at the interface of two different density fluids interacting with each other. This mixing example can be water suspended over air under the effect of gravity., where the air will penetrate the water forming bubbles Read more

Challenge-1 A comparative steady-state analysis of a mixing T pipe (as shown in fig 1) is done. Fig.1: T joint with hot and cold fluid (mixing) flow.   Three cases are analyzed as per the description below: Case-1: Short length pipe with hot inlet air (x-axi Read more

1. Ahmed Body and its importance: The Amed Body was first described by S.R. Ahmed in 1984. Its layout is as follows: Three main features were seen in the wake: 1. The A recirculation region that is formed as the flow separates at the top of the vertical back surfac Read more