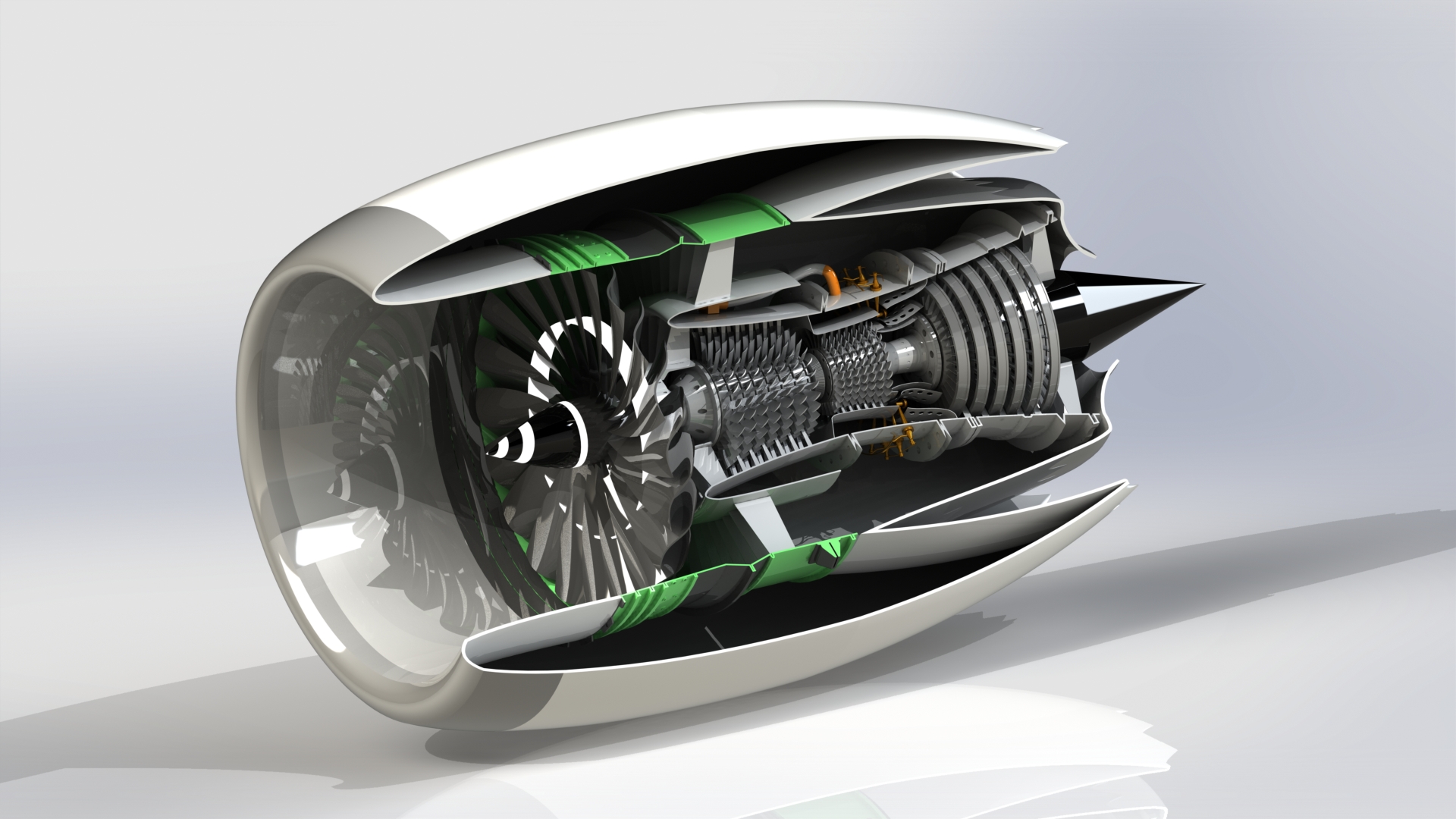 The objective of this project is to design, model and render a Turbofan Jet Engine using Solidworks and Solidworks Visualize 2018.

The main intent of this project is to demonstrate the skills that I have acquired through this course “Ultimate Solidworks”. Both Solid and Surface modelling principles were applied in this project.

The technical properties such as materials, processes, dimensions, tolerances etc were not deliberated in this model. Application of Design intent and modelling parameters was done.

A turbofan or fanjet is a type of air-breathing jet engine that is widely used in aircraft propulsion. A turbofan engine is the most modern variation of the basic gas turbine engine. As with other gas turbines, there is a core engine. In the turbofan engine, the core engine is surrounded by a fan in the front which sucks in air and additional turbine(s) at the rear. Most of the air flows around the outside of the engine, making it quieter and giving more thrust at low speeds. Most of today's airliners are powered by turbofans.

On the exterior, I have designed the Fuel Injectors, Casing, Exhaust cone, Frames/Struts, Nacelle with Exhaust nozzle. 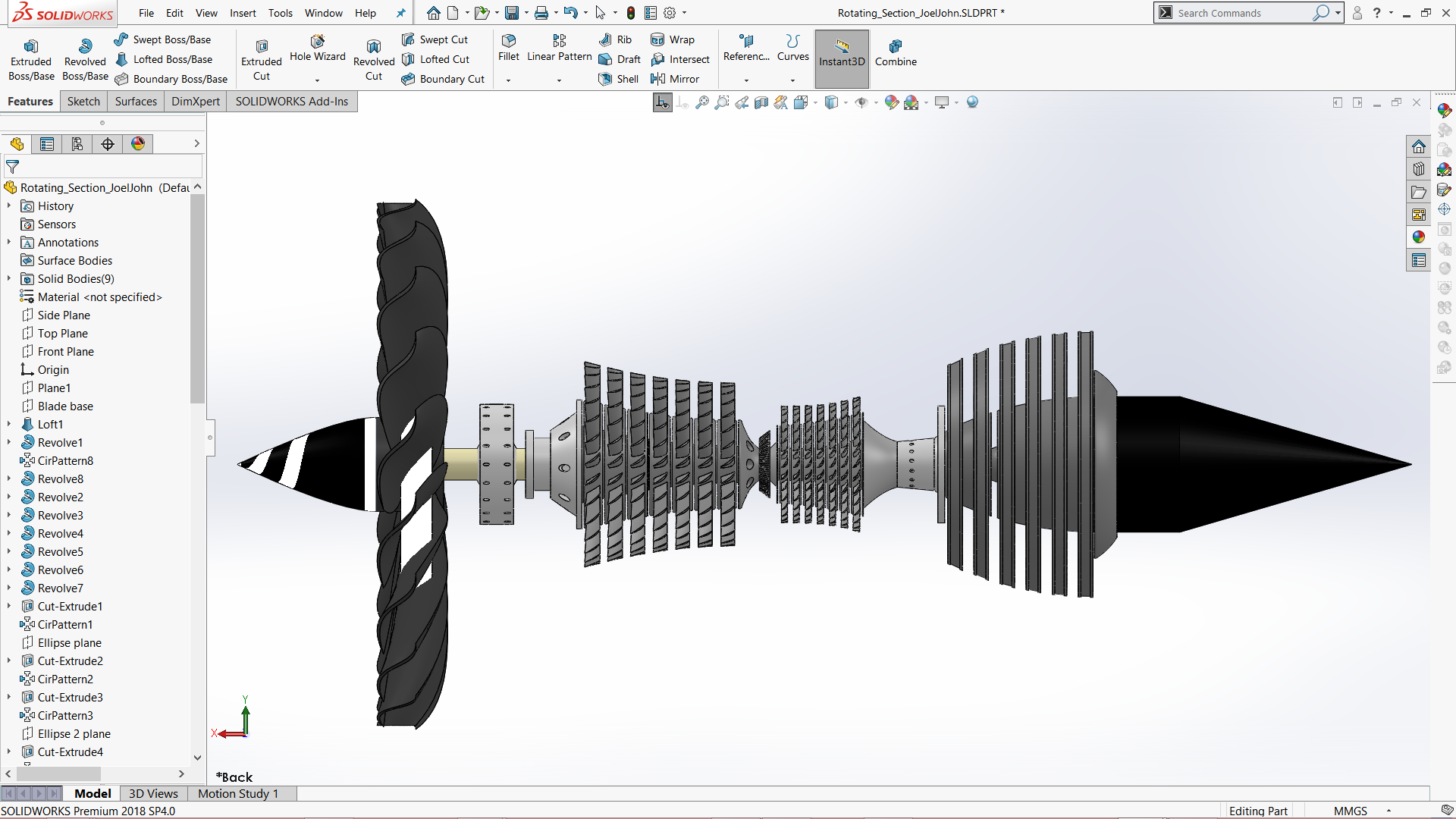 Fan- The first part of the turbofan is the fan. It sucks in tremendous quantities of air into the engine.The air moves through two parts of the engine. Some of the air is directed into the engine's core, where the combustion will occur. The rest of the air, called "bypass air", is moved around the outside of the engine core through a duct. This bypass air creates additional thrust, cools the engine, and makes the engine quieter by blanketing the exhaust air that's exiting the engine.

(Fan blades are connected to each other using midspan shrouds to prevent them from twisting due to the aerodynamic loads on the airfoils. But this is no longer used in modern Turbofans. It's added here only for aesthetic purposes.)

Compressor- The compressor is located in the first part of the engine core. It uses a series of airfoil shaped spinning blades to speed up and compress the air. It's called axial flow, because the air passes through the engine in a direction parallel to the shaft of the engine (as opposed to centrifugal flow). As the air moves through the compressor, each set of blades is slightly smaller, adding more energy and compression to the air.

Turbine- The turbine is a series of airfoil shaped blades that are very similar to the blades in the compressor. As the hot, high-speed air flows over the turbine blades, they extract energy from the air, spinning the turbine around in a circle, and turning the engine shaft that it's connected to. This is the same shaft that the fan and compressor are connected to, so by spinning the turbine, the fan and compressor on the front of the engine continue sucking in more air that will soon be mixed with fuel and burned.

Nozzle Cone- The last step of the process happens in the nozzle. The nozzle is essentially the exhaust duct of the engine, and it's where the high speed air shoots out the back. By forcing air out the back of the engine at high speed, the airplane is pushed forward.

New Planes were created as and when necessary. 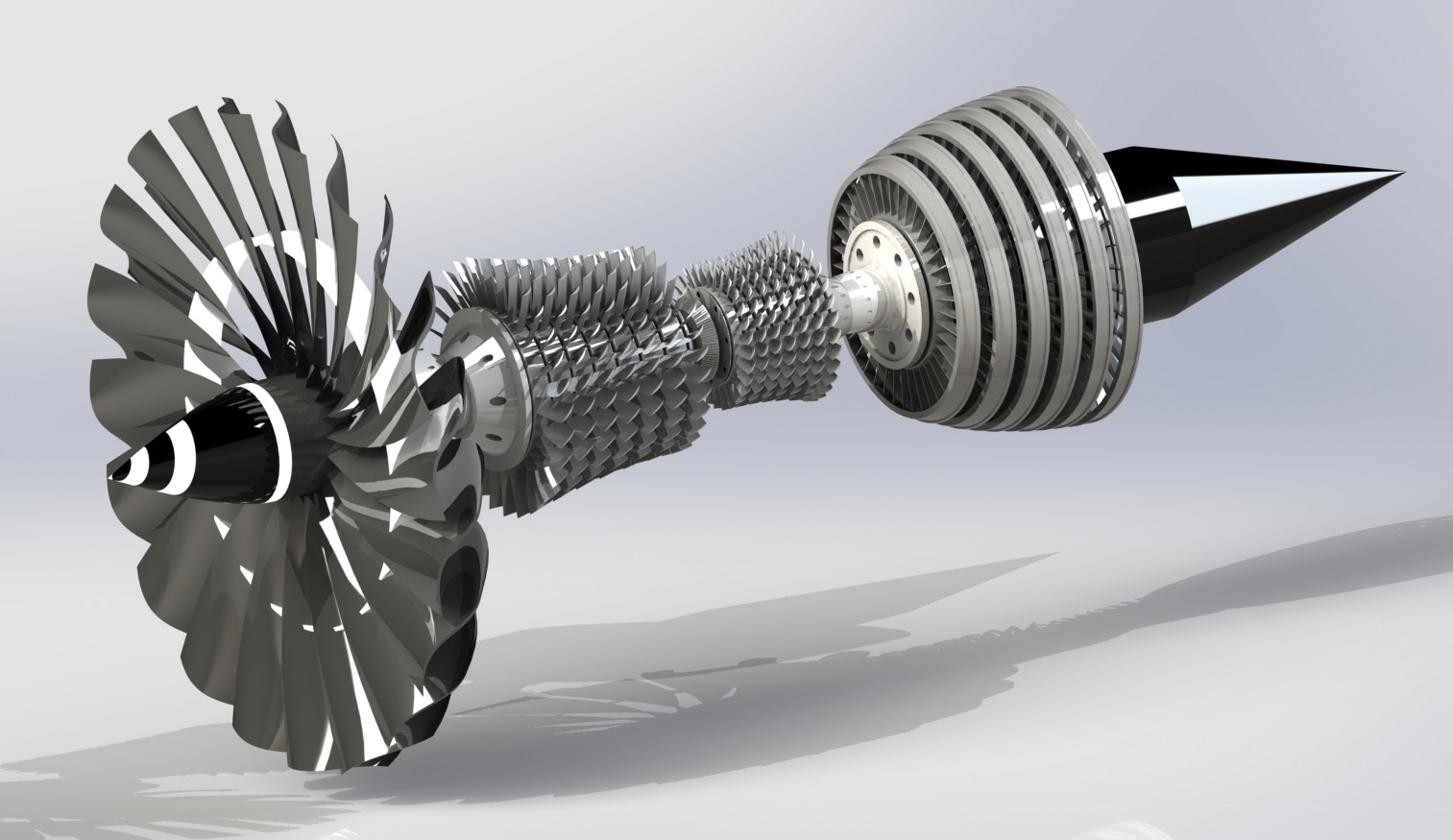 This section consists of the supporting structure for the rotating section aling with Stator Vanes, Fuel Injectors, Combustion chamber. 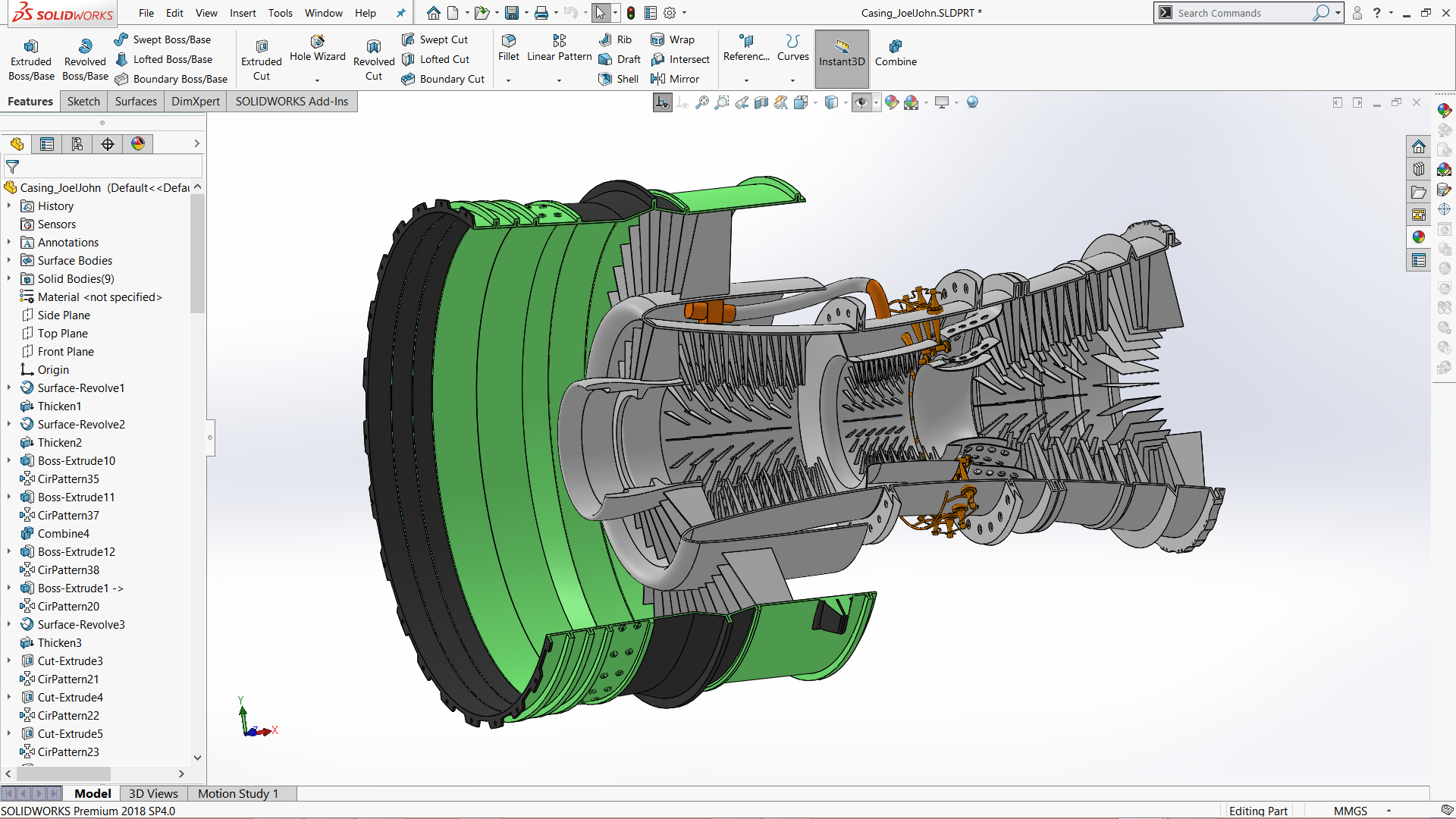 Fig 3- Casing Split view. Stator vanes are provided between the compressor and the   turbine blades. The gold coloured circular arrangement are Fuel Injectors with their nozzle   situated in the combustion chamber 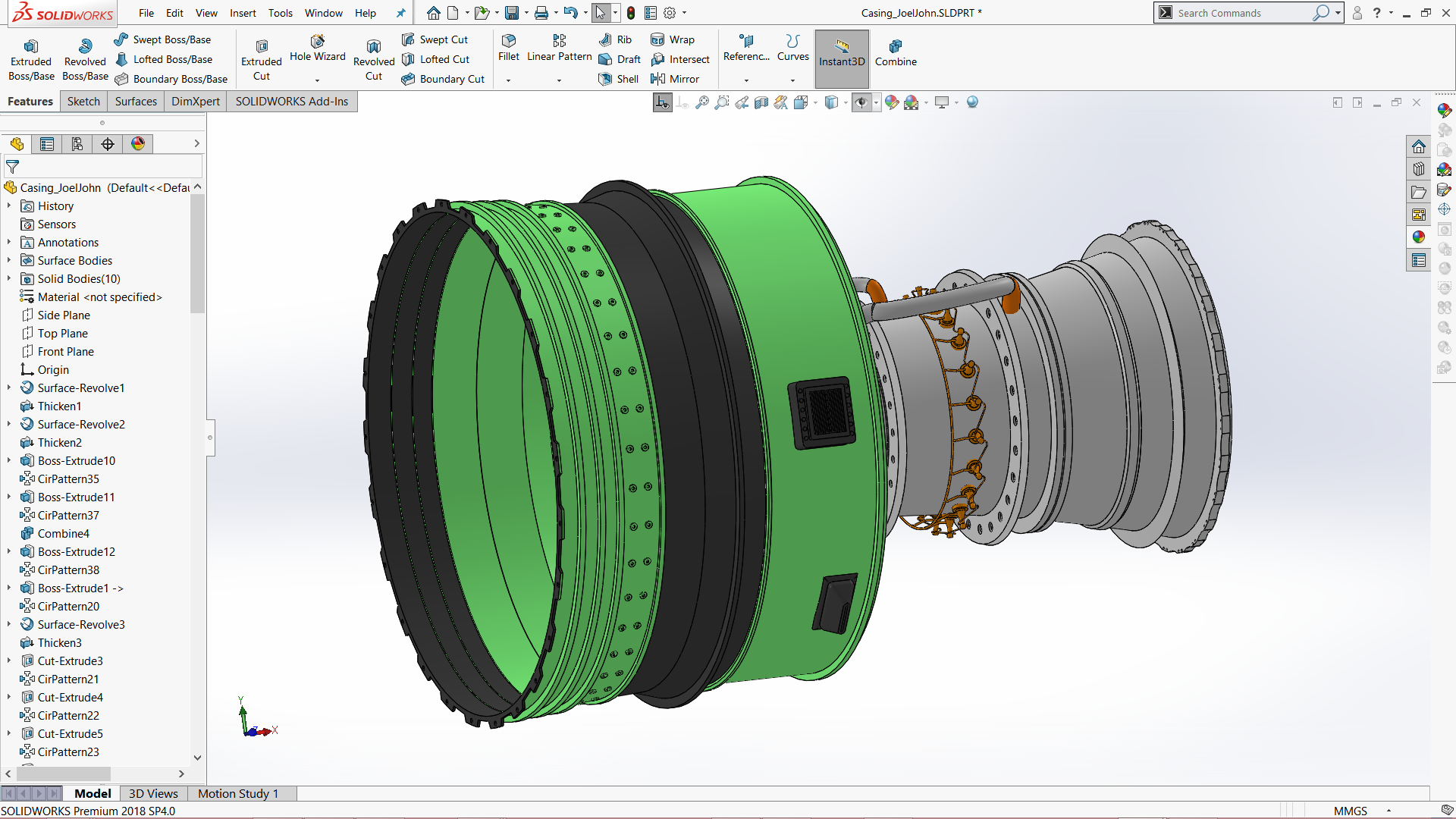 Stator Vanes- In between each set of compressor blades are non-moving airfoil shaped blades called "stators". These stators (which are also called vanes), increase the pressure of the air by converting the rotational energy into static pressure. The stators also prepare the air for entering the next set of rotating blades. In other words, they "straighten" the flow of air.

Support Struts/Frames- Struts attach the tail cone with the casing and acts as a structural support as well as an aerodynamic component.

New Planes were created as and when necessary.

The part was first designed as a surface body and then thickened to convert it into a Solid Body before adding other features. 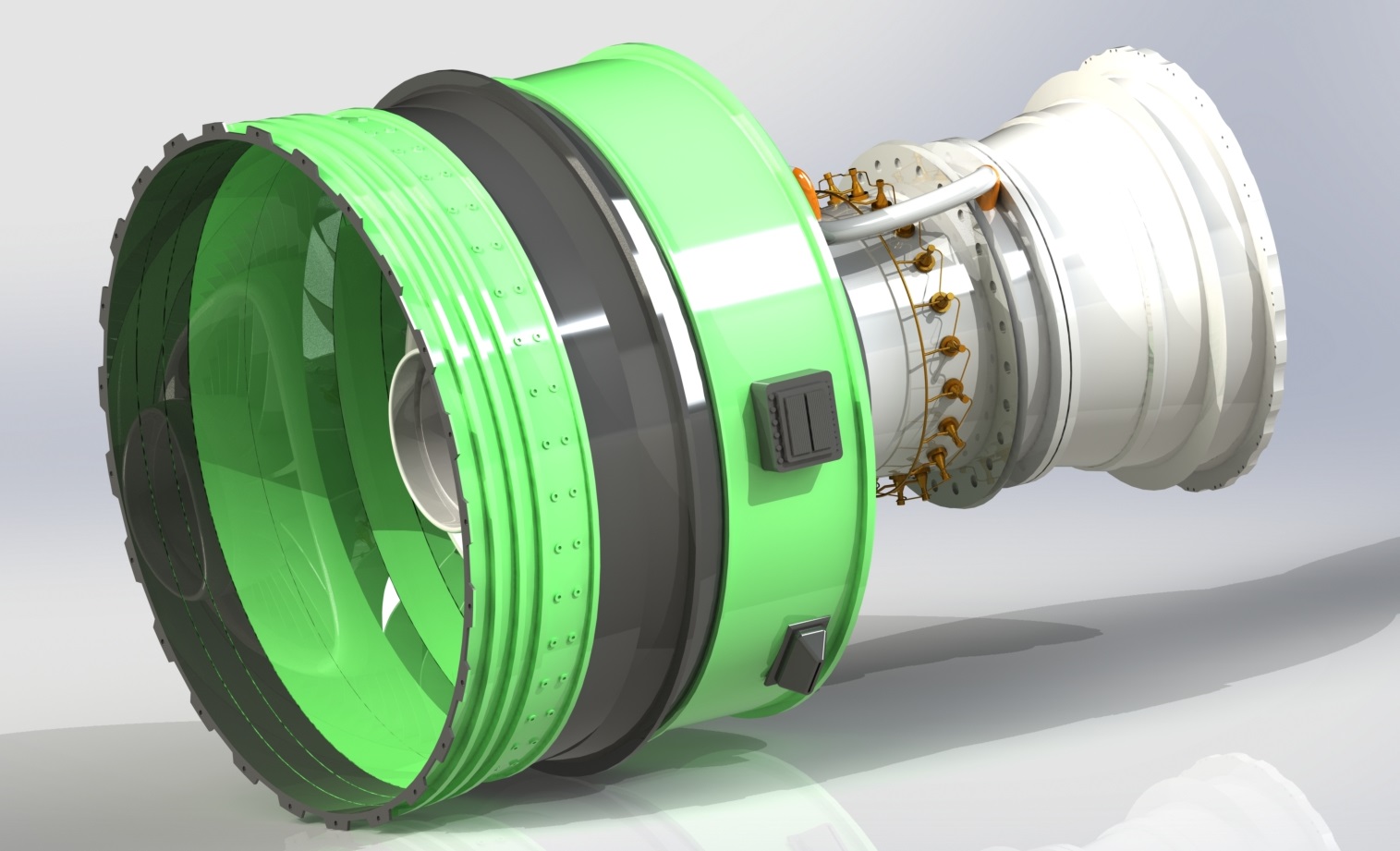 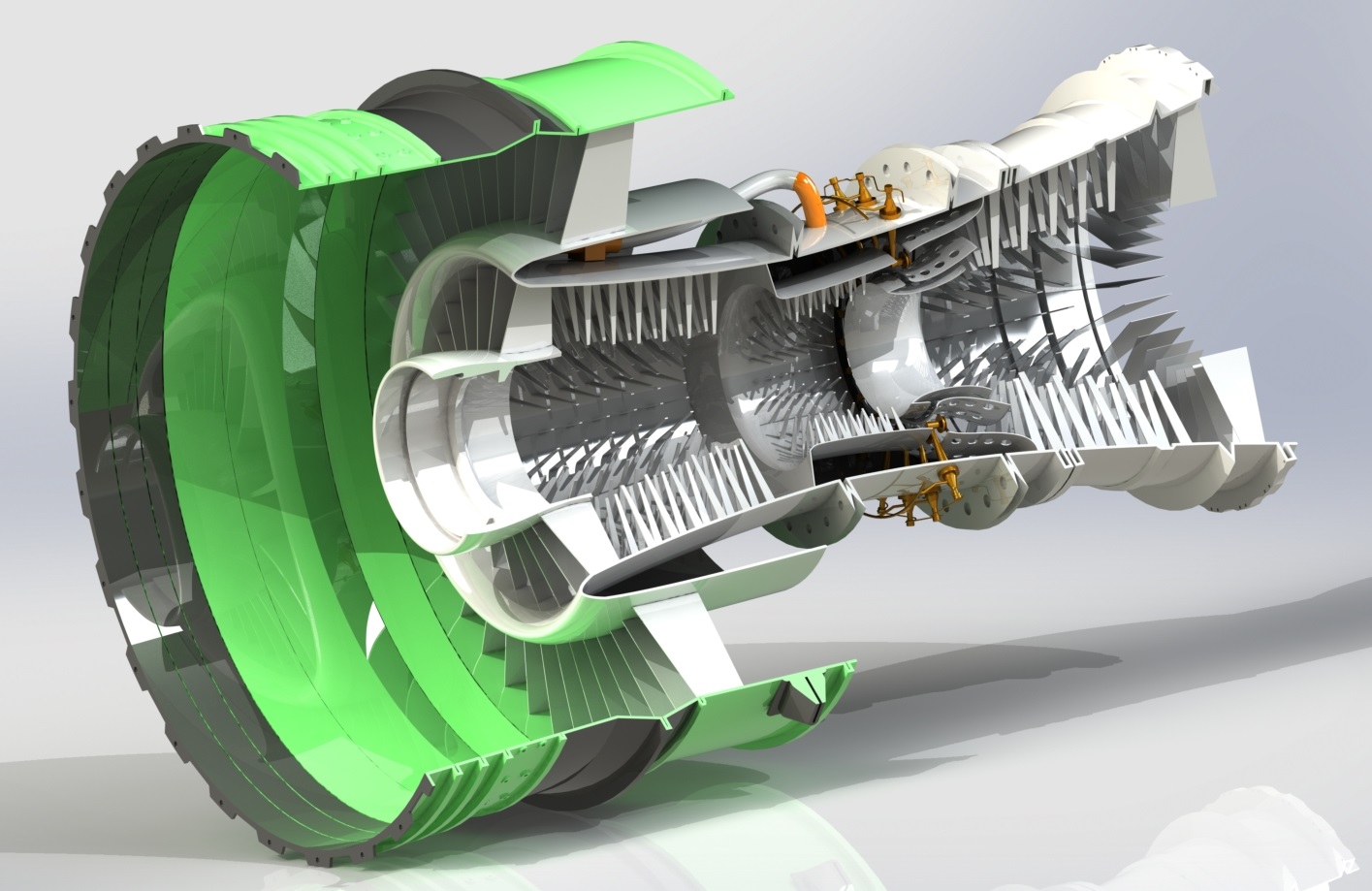 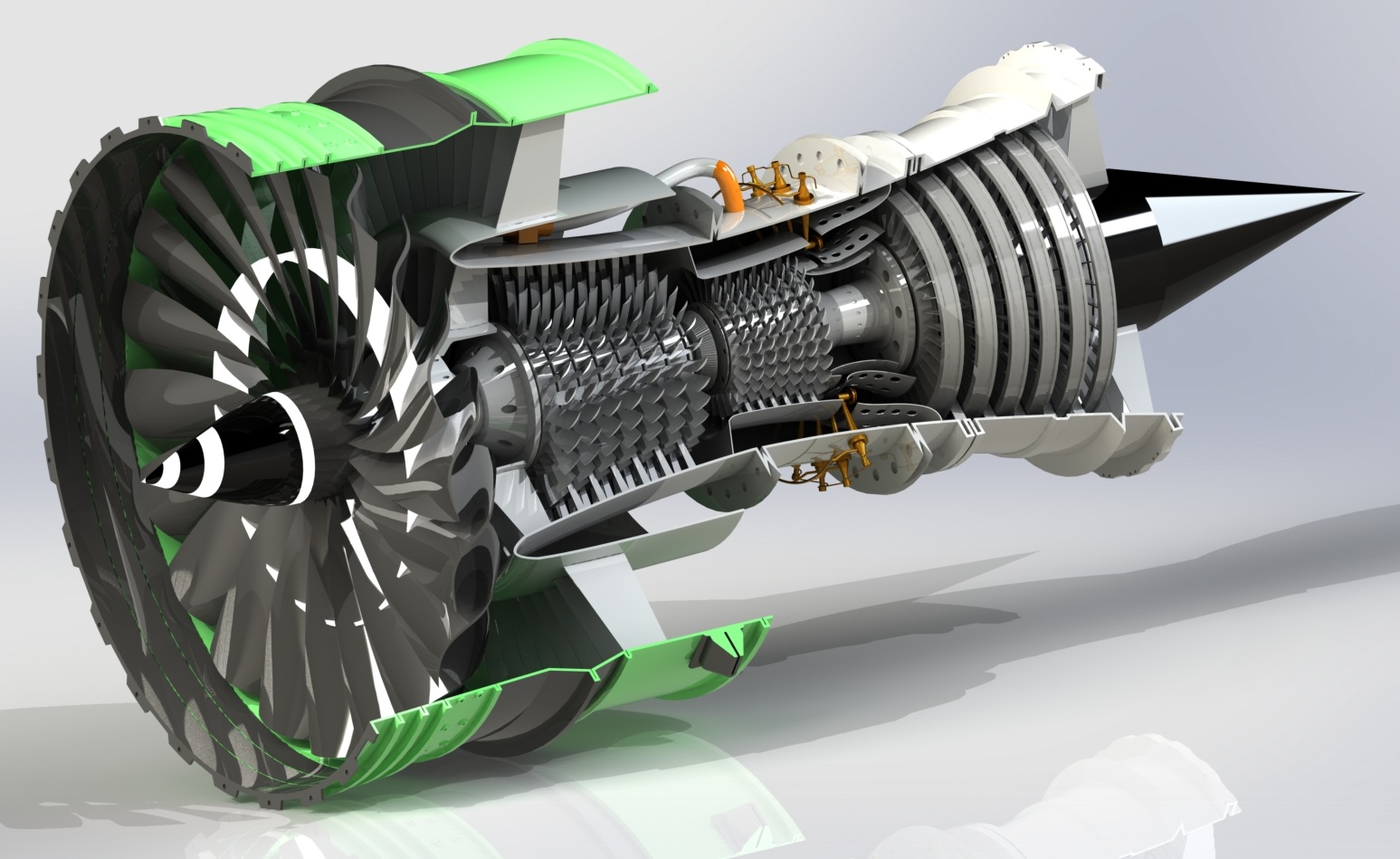 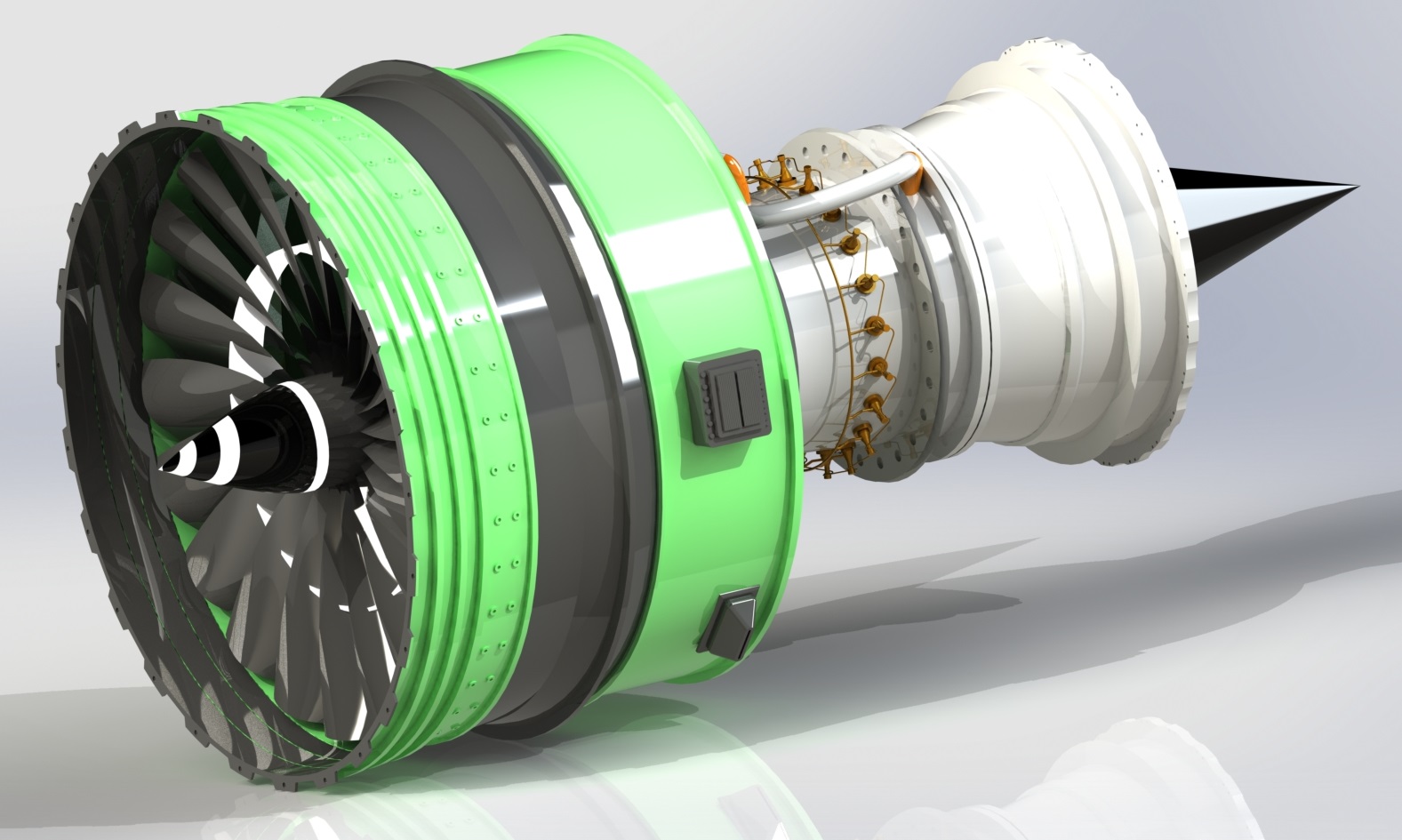 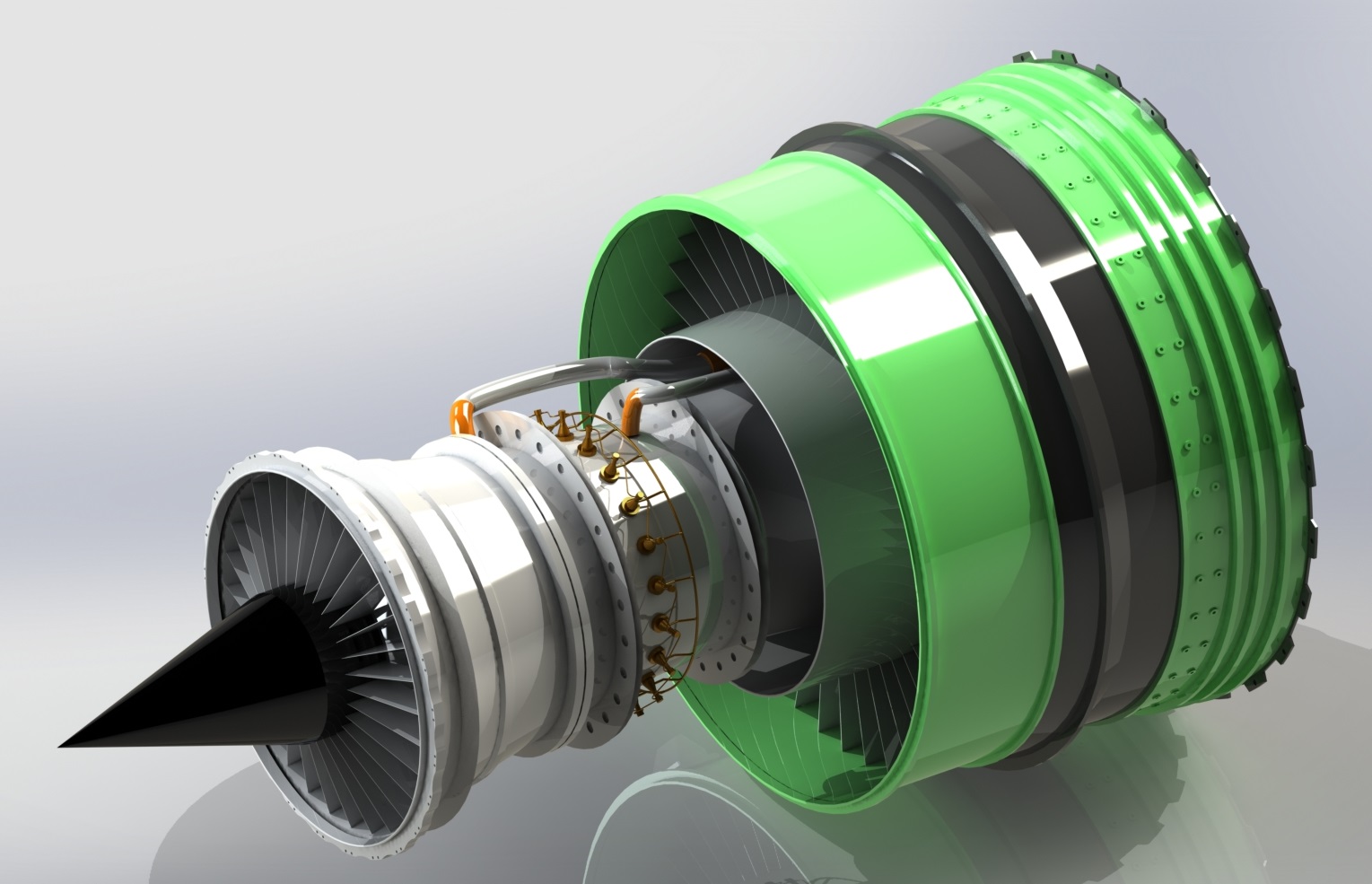 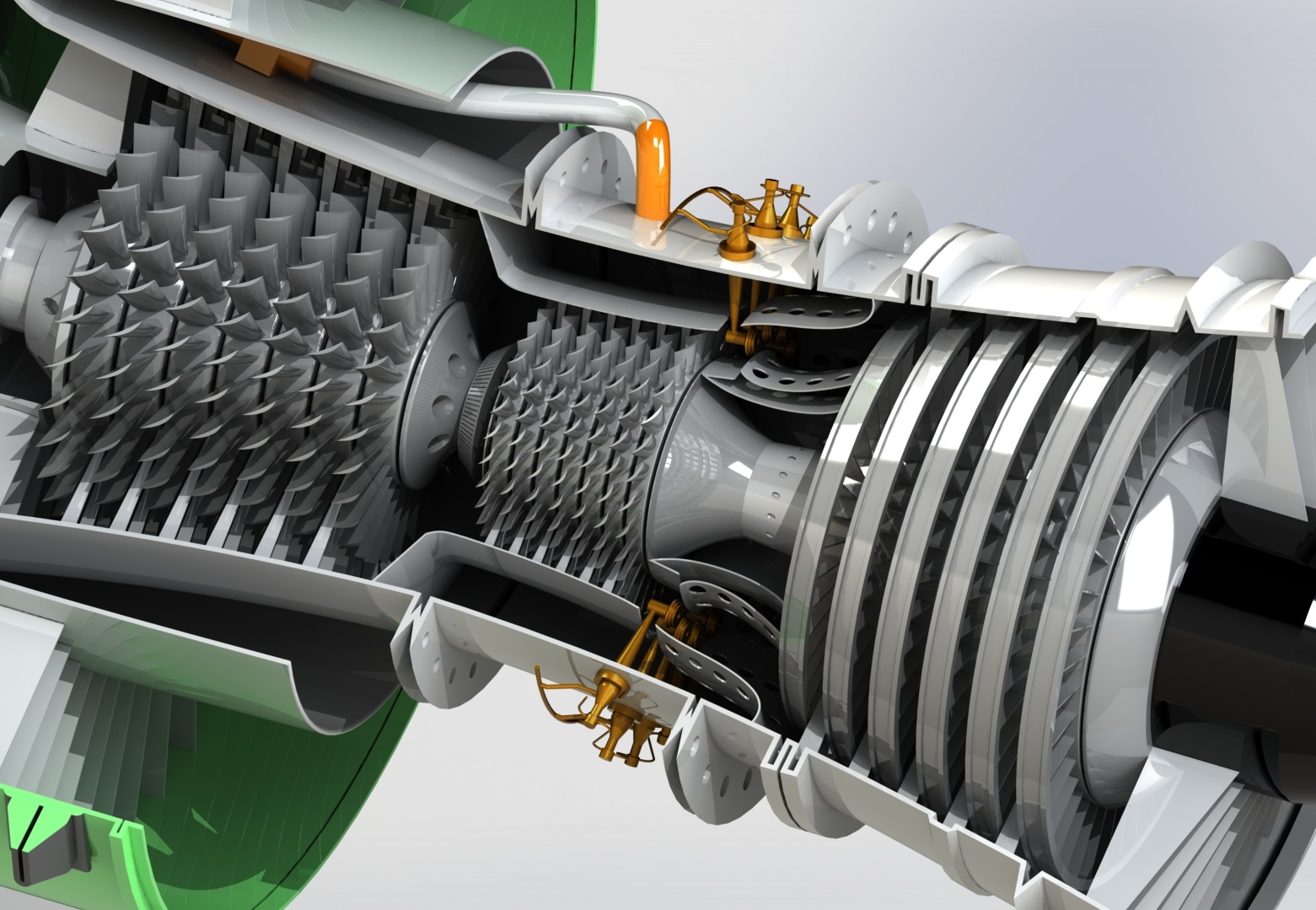 A nacelle is a housing that holds engines, fuel, or equipment on an aircraft. The primary design issue with any aircraft-mounted nacelle is aerodynamics. Nacelles attached to wings are almost always mounted underneath, as this is the "high pressure" side of an aircraft wing. The exhaust nozzle is also situated at the end. 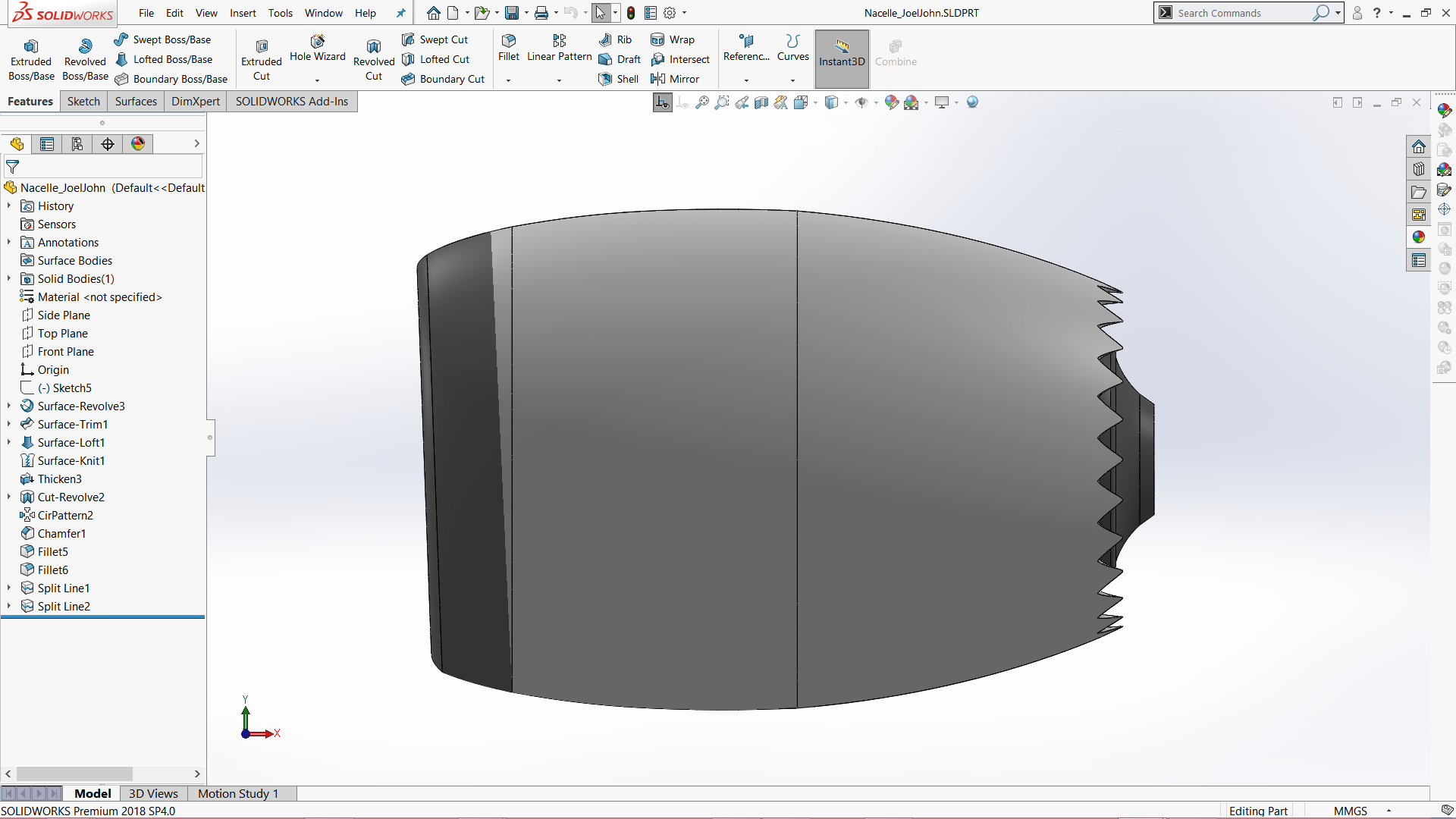 The part was first designed as a surface body and then thickened to convert it into a Solid Body. 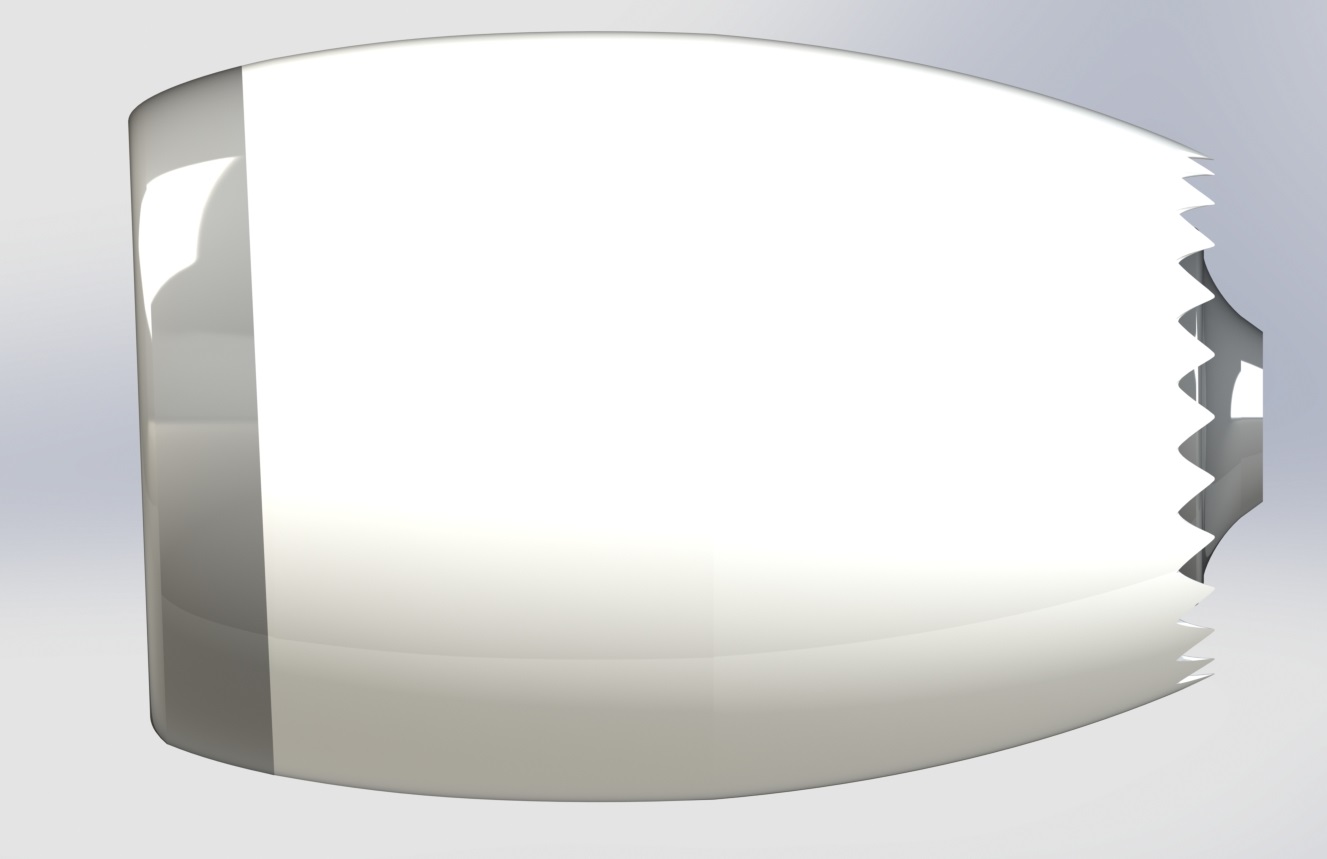 For each part, suitable appearances were applied.

Assembled the parts of the jet engine using relations and Standard Mates(Coincident, Concentric and Distance mates).

Plane orientation/alignment was taken care of while performing the mating. 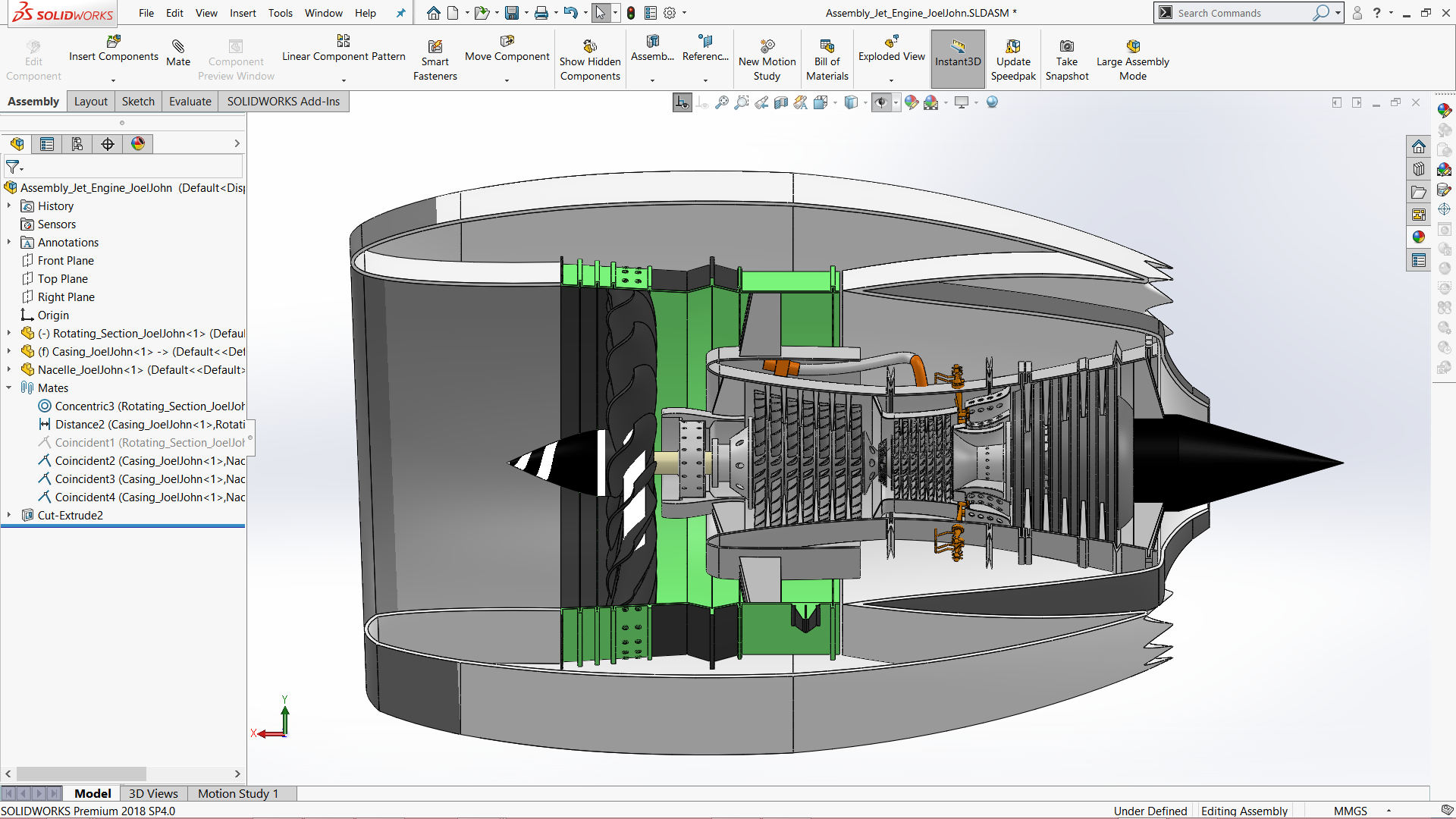 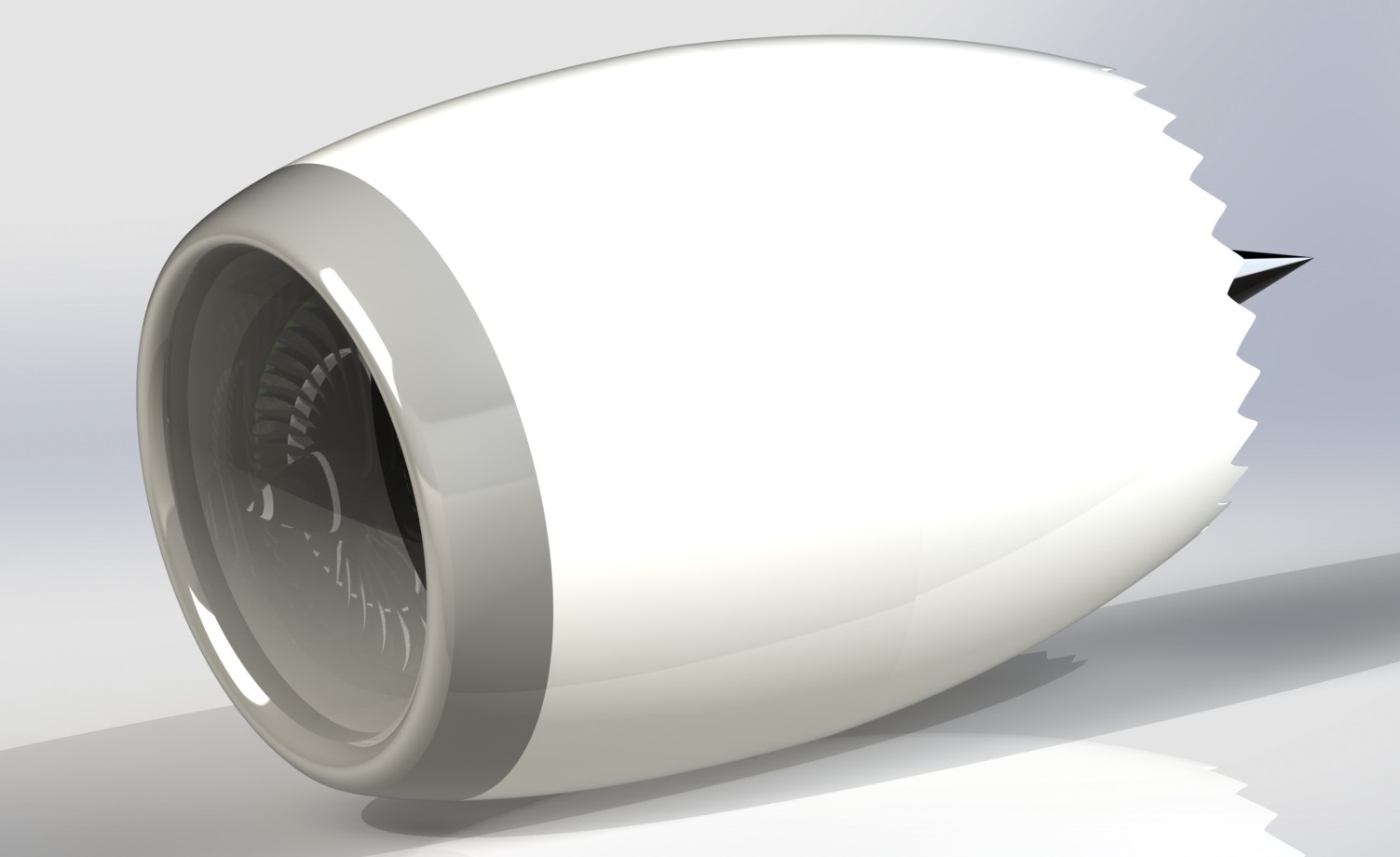 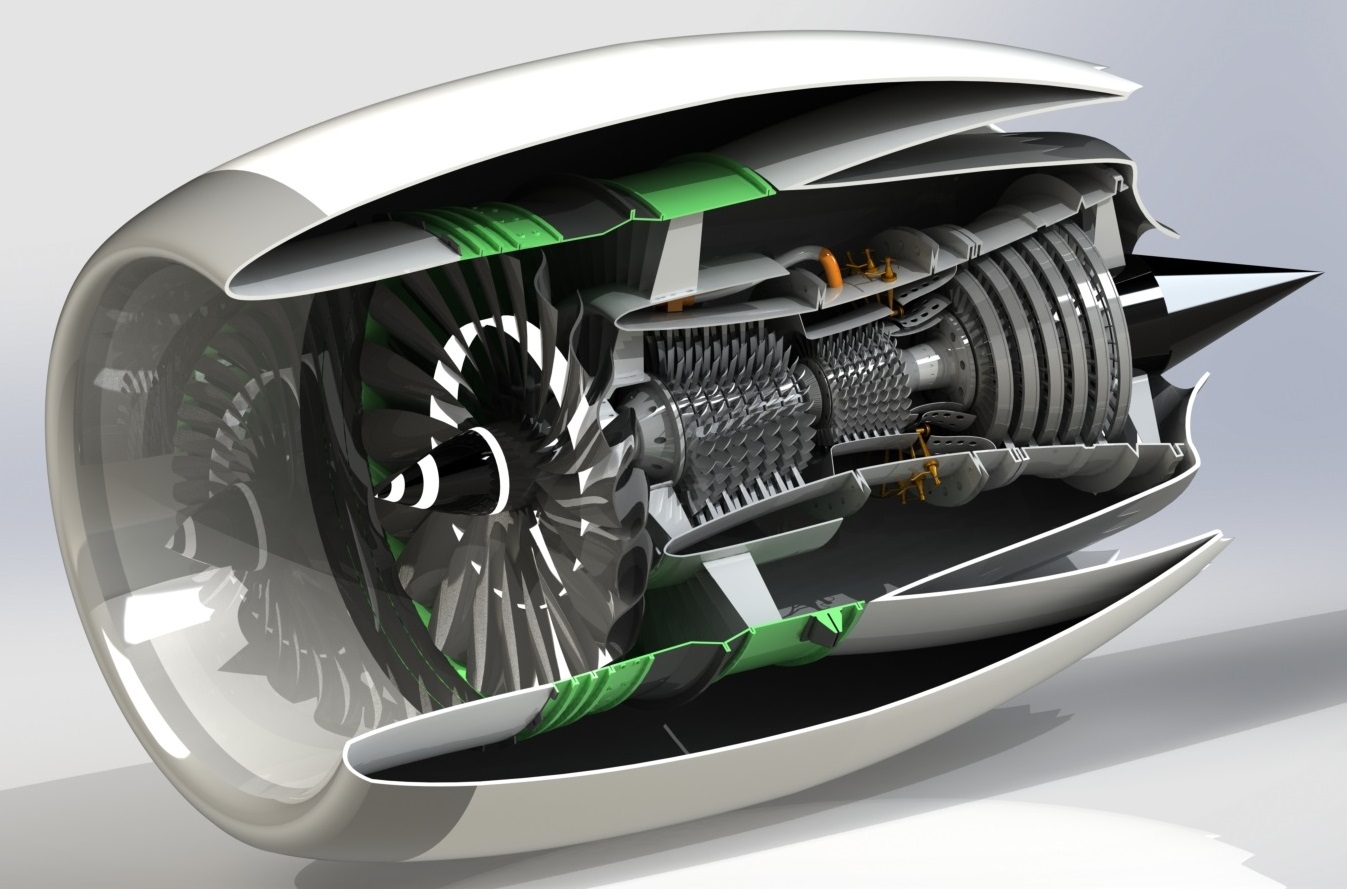 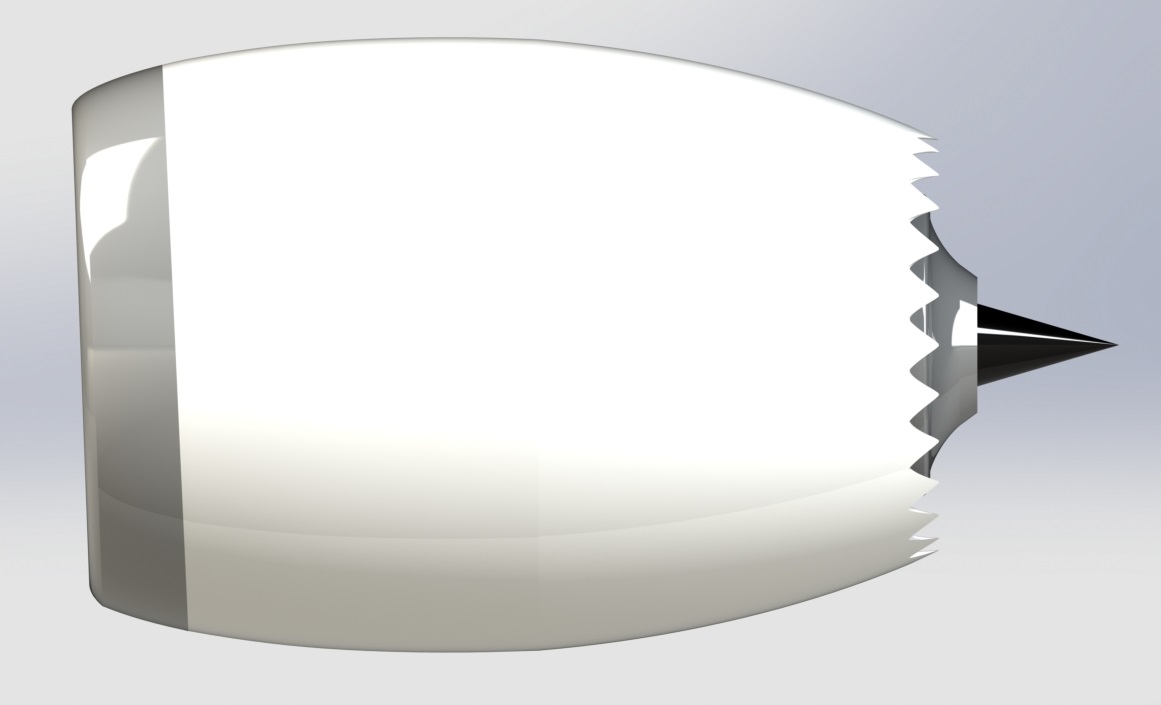 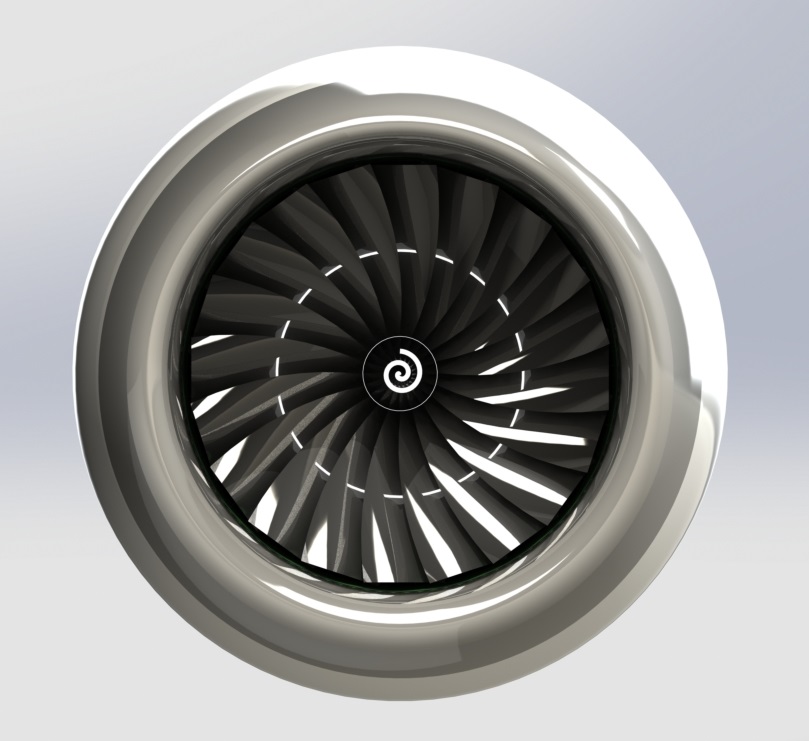 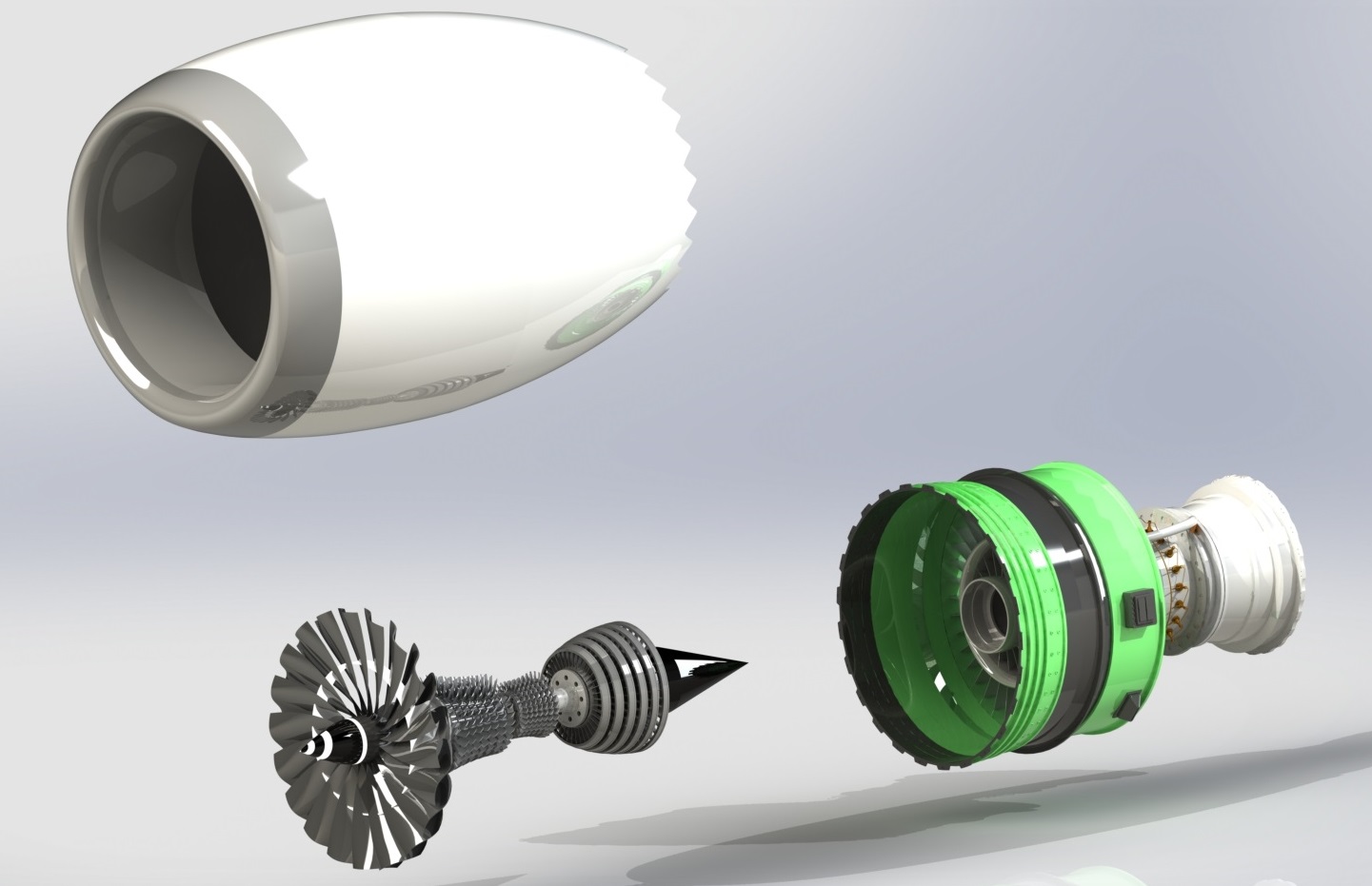 Photorealistic rendering of the model was done using Solidworks Visualize.

The assembly was imported to Solidworks Visualize. The Environment, Backplate and Camera positions were chosen and tweaked accordingly to give the image a photorealistic finish. 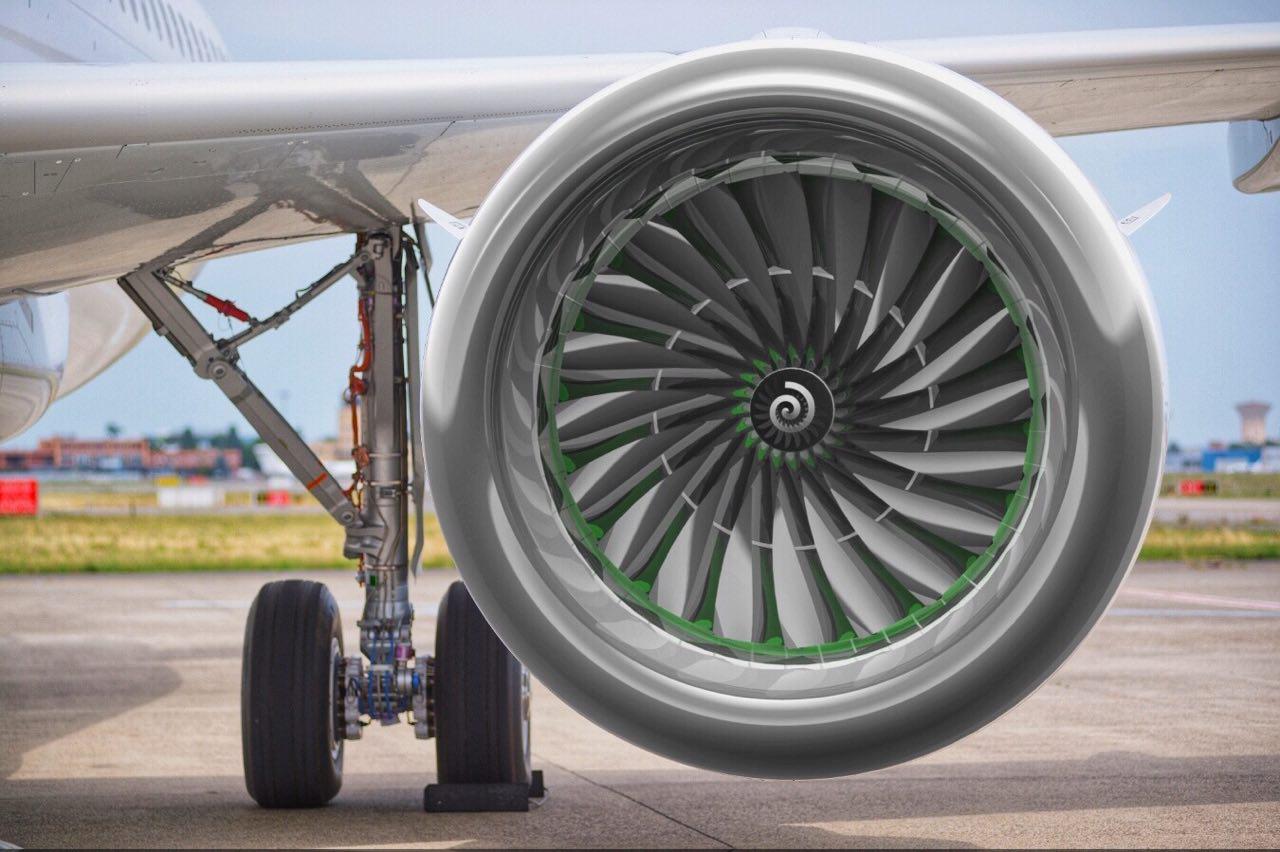 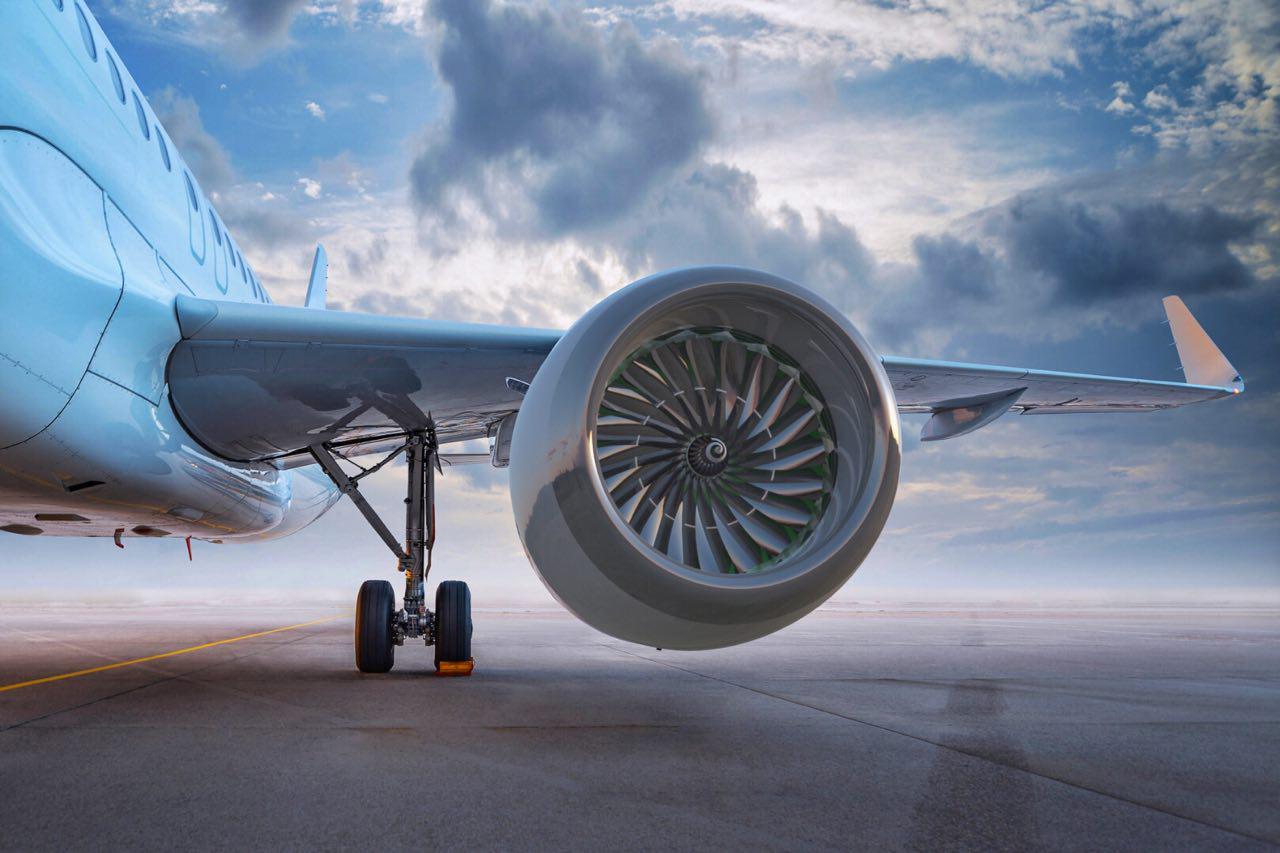 By applying solid and surface modelling methodologies, the design and assembly of Turbofan Jet Engine was completed using Solidworks 2018. The model was given a photorealistic render using Solidworks Visualize 2018.

The project took 70 man hours to complete, including the time taken for rendering.

This model can be further improvised by adding other parts such as the hydraulic,pneumatic and electrical components consisting of numerous narrow tubing and wiring.

The idea behind the project was to demonstrate the basic working principle of a Turbofan Jet Engine by applying the Solidworks skills that I learned through this course.

Benchmarking is a structured comparison between similar products, services or processes on some dimensions of performance. In this case we are using Competitive benchmarking which is the process of comparing a product to a direct competitor using standard measurements. Read more

UNDERBODY COATING   Under body coatings are done to protect the vehicle chassis from external environment thereby ensuring the integrity and safety of cars. It plays a very important role in the service life of the vehicle.           Read more

Objectives     1. To design and model the exterior parts of a Sunseeker Predator Yacht.     2. To assemble the parts.     3. To create a photorealistic render of the Yacht.   Softwares Used     • Solidwor Read more

Objectives     1. To design and model the exterior parts of an American Chopper(motorcycle).      2. To assemble the parts.     3. To create a photorealistic render of the Chopper.   Softwares Used     • Solid Read more