Emission characterization on a CAT3410 engine

3-D simulation in Converge CFD to compare the emission and performance characteristics for a CAT 3410 diesel engine with different piston bowl geometry.

In previous years of research has shown that the different engine configurations such as to increase the mixing of fuel-air ratio have increased machine efficiency and reduced emissions at a large scale. So one such methodology to increase the efficiency and reduce the emissions by incorporating different bowl geometries in the pistons in this literature two such piston bowl configuration will be thoroughly discussed W-pistons and omega piston. 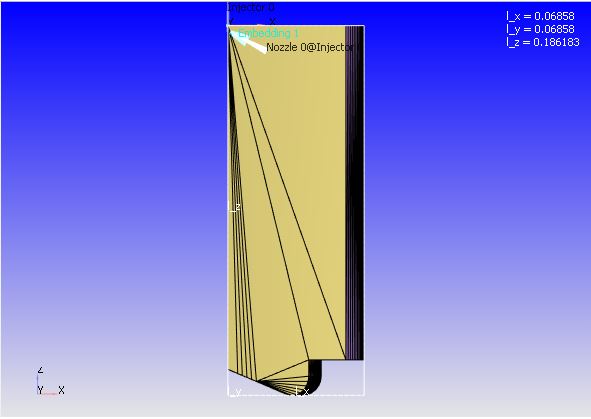 Converge Simulation
The present study used CONVERGE simulation software for the CFD analysis for different piston bowl geometries. In order to make the computation a lot faster, we are using 60 degrees sector models for the current study. CONVERGE automatically generates orthogonal structures grids using AMR (adaptive mesh refinement) based on simple user-defined grid control parameters this simplicity helps the user to avoid the manual grid creation.SAGE model has been incorporated into CONVERGE which helps in including detailed chemistry in combustion applications with a set of chemkin format input files the fuel used is n-heptane which has close similarity with the diesel fuel.
In order to include detailed chemistry in combustion applications, the SAGE model has been incorporated into CONVERGE. This approach allows the user to employ detailed chemical kinetics in combustion simulations with a set of CHEMKIN input files, which are considered the standard format for defining chemical mechanisms, SAGE mechanisms use CODES solver in CONVERGE. The detailed chemistry solver SAGE calculates the reactions rates for each elementary reaction, while the CFD solves the transport equations this combustion model can be used for the modeling of different combustion regimes such as ignition, premixed, controlled, etc.

A sector simulation was carried out using two different piston bowl profiles. The bowl profiles are extracted from a three-dimensional geometry and a sector is created using make engine sector surface tool in Converge CFD.

The thermodynamic and Chemical kinetic files for the diesel engine combustion was used.

The simulation was run from Inlet valve closing to Exhaust Valve Opening. 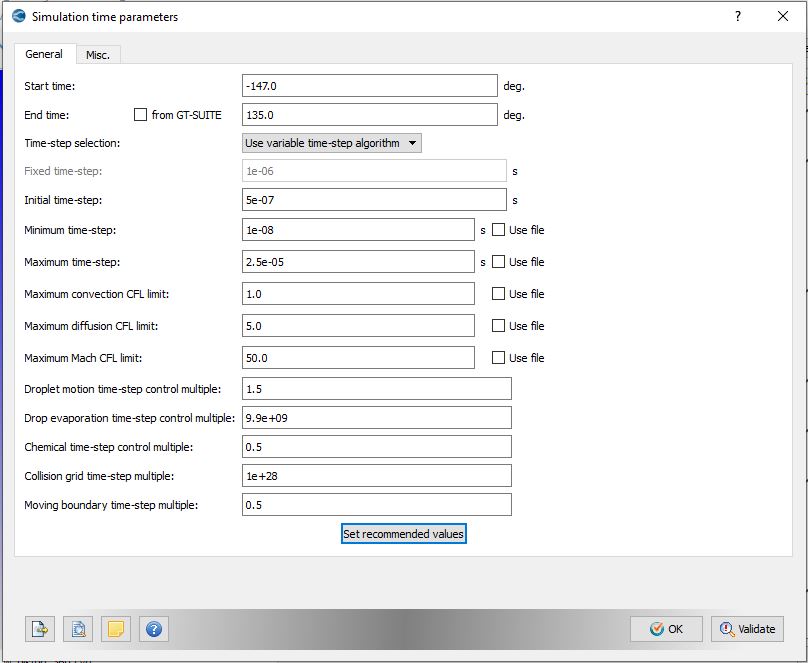 The boundary conditions for various parts of the engine are given as user input. The front and back face of the sector are symmetric. 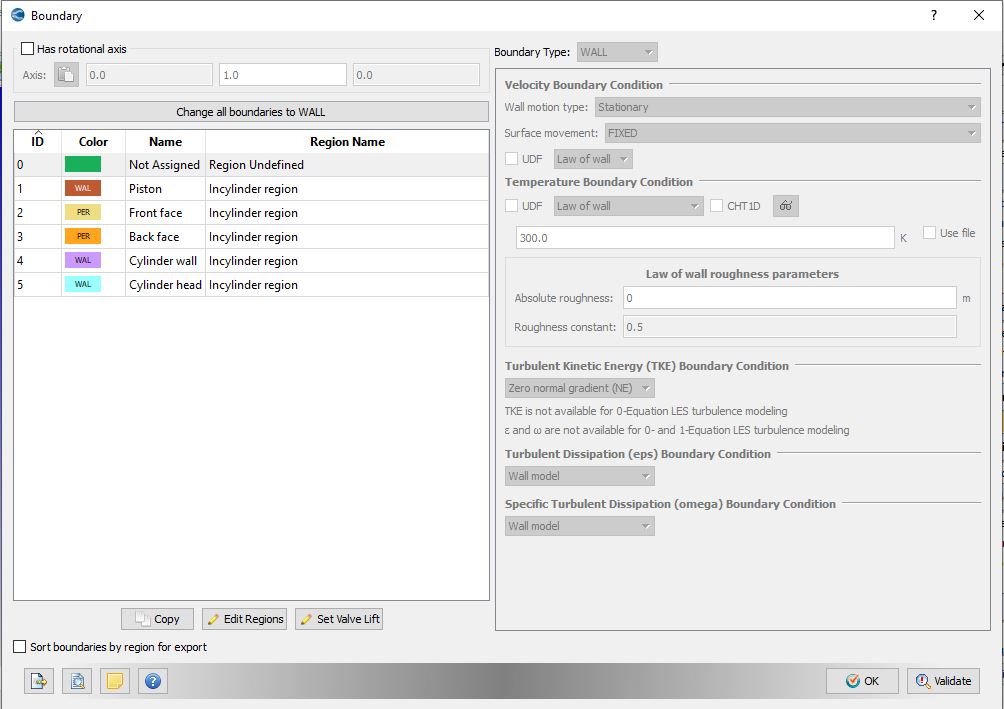 The SAGE detailed chemical kinetics solver is used for combustion modeling. Converge includes the multizone model which accelerates the chemistry calculations by grouping together similar computational cells and then invoking the chemistry solver once per group rather than once per cell. In the multizone model, at any given time t, each cell is at some thermodynamic state. Based on the thermodynamic states of the cells, CONVERGE groups the cells into zones. The thermodynamic state of each zone is based on the average temperature and composition of all the cells in that zone. Converge invokes the chemistry solver once on each zone. The RNG-K-EPSILON model was used for turbulence modeling. The various turbulence constants values are used based on the recommended values from CONVERGE. 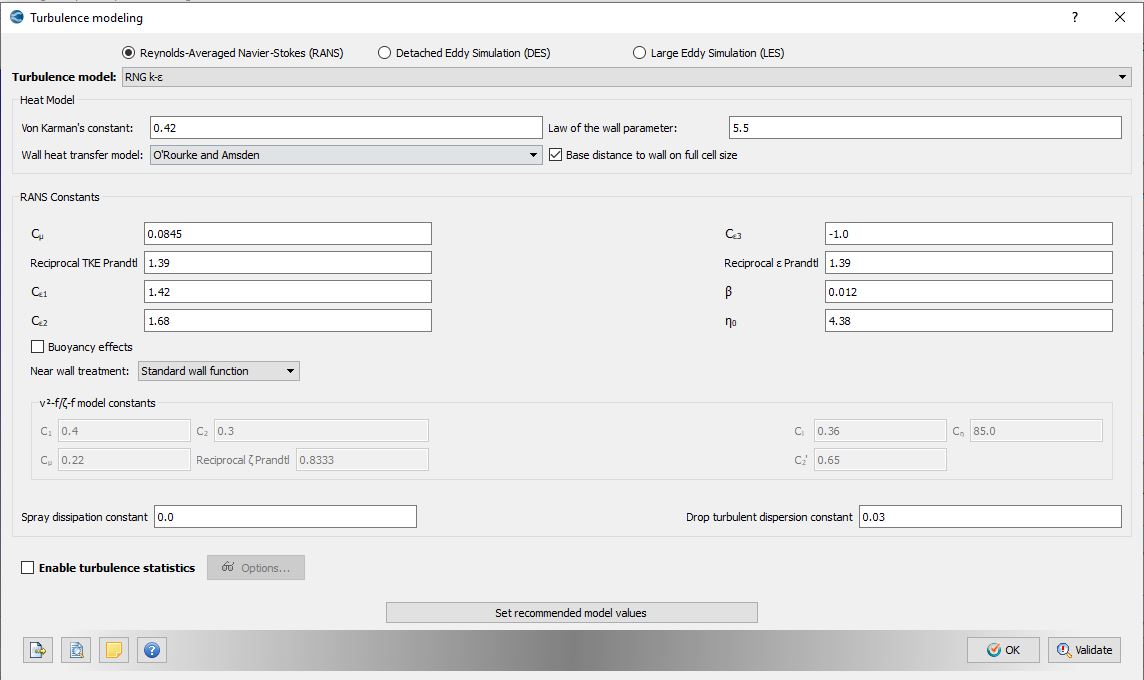 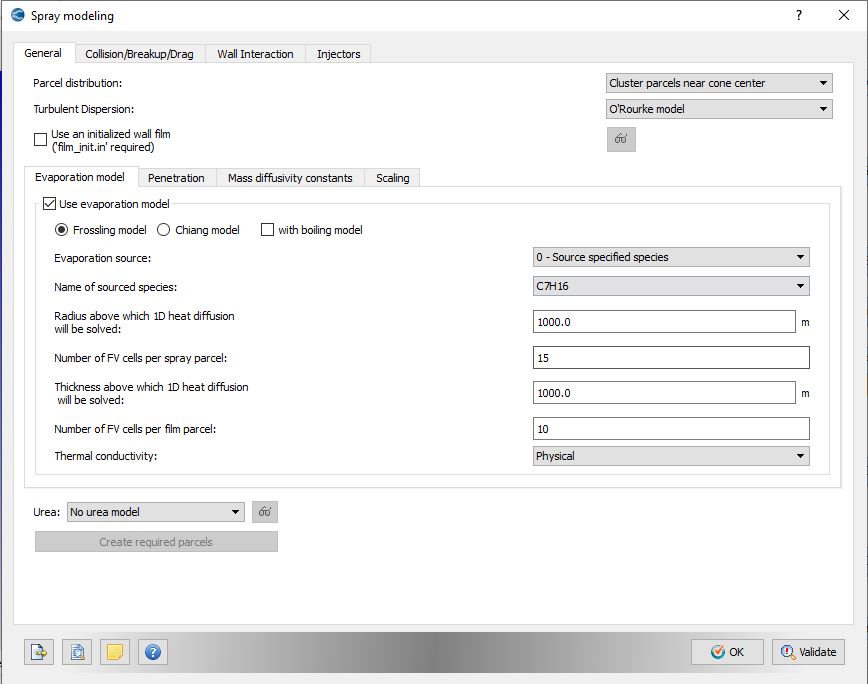 The Kelvin-Helmholtz model and Rayleigh-Taylor model are used for spray modeling. An injector with four nozzles is used to spray the fuel.

The first four are common to all IC engines but the last two are reserved for only CI engines. Also, there is another vertical of emissions caused by crankcase blow-by and hydrocarbons from fuel tank which is known as non– exhaust emissions. In this scope of the study, we will be mainly discussing the CI engine emission parameters using two different bowl geometries. Figure3 represents the picture of the HC, CO, NOx emissions with respect to equivalence ratio ᶲ as can be seen HC will decrease slightly with an increase in ᶲ due to high cylindrical temperature making it easier to burn up any over mixed or under the mixed fuel-air mixture. At high loads, however, HC may increase again if the amount of fuel in the regions is too rich to burn during the primary combustion process. CO emissions will be very low at all equivalence ratio since excess air is always available, coming to NOx emissions, will steadily increase as ᶲ increases due to increasing fraction of cylinder contents being burnt gases close to stoichiometric during combustion and also due to higher peak temperatures and pressures.

Turbulence in diesel engines is very important to achieve good mixing of air and fuel and to avoid fuel-rich regions. Turbulence can be achieved by proper design of the combustion chamber geometry and the inlet system.

W pistons have higher peak pressure compared to omega pistons per cycle the peak pressure for the w piston the peak pressure is around 11.5336 Mpa and omega piston’s peak pressure is reaching around 11.2571 Mpa as seen from the figure 4 even though this result is not enough for a better selection of the piston bowl geometries but there is something fishy to be discussed here the angle of the crank while attaining the peak pressure for the omega and W pistons is 12.48 and 10.69 degrees, since the injection starts at -9 degrees the omega pistons can produce more better combustion compared to W pistons which may be the reasons for higher indicated power. But due to the lower pressure of the W pistons, from emission point of view, the number of emissions are way less than the omega pistons. Hence the keeping the emission regulations in mind the W pistons are much better but if are taking the only performance criteria’s into considerations the omega pistons are better performing but as nowadays the former criteria is more important or we should move into more optimized bowl geometry for a better balance.

It can be depicted that the omega piston has reached a temperature of 1768 K at 25.47ᵒ while the W pistons have reached a temperature of 1464.55 K at 39.434ᵒ.when viewing the results there happens to be some anomaly going on, it’s due to the injection timing. As it’s evident that the injection time starts at -9ᵒ at this time the peak pressure at both piston geometries are almost same that is 11 Mpa and the injection duration is for other 21ᵒ i.e.: up to 12ᵒ.But as you know more temperature results in more NOx emissions in the re-entrant form of pistons. Also since the inline temperature is so low there is a chance that there is incomplete burning of fuels but this gets into more clarity when we study other graphs along with. 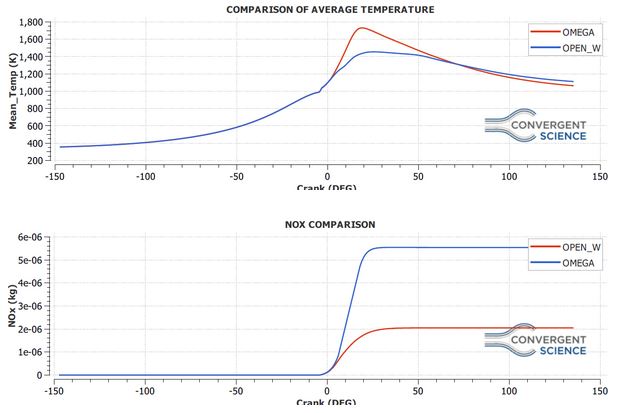 Comparison of soot emissions between Omega and Open-W piston:

The spray-wall impingement is higher in Open-w piston compared to Omega piston, hence the soot emission is comparatively high in Open-W piston. 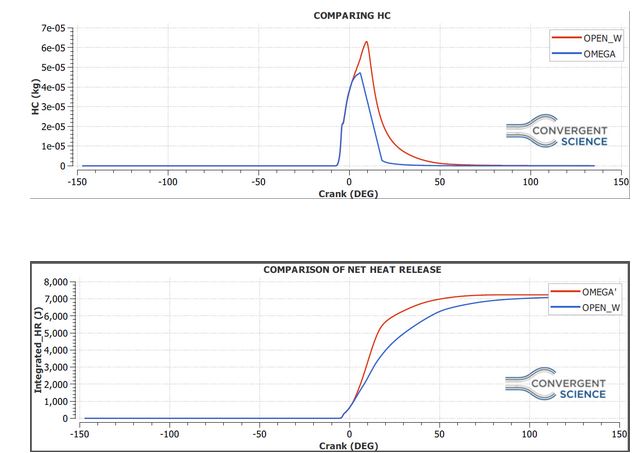 NOx is formed mostly from the atmospheric nitrogen at low temperature the nitrogen compound is diatomic and stable but when the temperature is increased the N2 receives much energy to breaks its partial covalent triple bond which results in the formation of monoatomic Nitrogen which is highly unstable and also reactive this results in the formation of the NOx. Due to high spray wall impingement in Open-w piston, the UHC (unburned hydrocarbon emission is high initially. However, due to high cylinder wall temperature, the spray gets vaporized.

It can concluded that if the performance parameters are focussed it gives a slight upper hand for the omega pistons since it produces more work output as seen above .but as we know the open pistons have slight advantage over the emissions compared to the omega pistons it really depends on the designer, at last, to design an optimum design so he gets a balanced result regarding the performance and the emissions . If we change the injector parameters like angle, pressure, etc. the performance parameters can be increased for the open-W pistons can be improved to great extent apart from this various engine management systems can be used to eliminate emissions such as controlling injection timing ,injection pressure many of which can be reduced solely by the engine design and controlling the injection parameters.