OBJECTIVE: To perform a frontal crash simulation using Radioss as a solver.

Neon 300K elements is the reference file. This model is a full-scale model. The simplified model used for the frontal crash has 95475 elements.

ADDED MASS: The initial weight of the model was 188kg. To reach the target weight of 700kg, extra weight was added on the base of the car so that the center of gravity of the vehicle was in the line with the driver.

INITIAL VELOCITY: Initial velocity of 15.56m/s were given to all nodes of the model. This was given under the boundary condition manager.

Type 7 contact was defined with the recommended properties  given below:

IGAP=2: Set a variable gap to take into account the true distance between parts.

GAPmin=1: Specify the minimum thickness of the model to avoid numerical issues. Typically half of the thinnest part.

Inacti =6: Remove initial penetrations where possible. Elsewhere, reduce to less than 30% of the defined gap.

Istf =4: Set stiffness of interface based on the softer of master and slave. It helps when stiffness is calculated between material like foam and steel.

Idel=2: Remove slave nodes from contact because of element deletion.

Iform=2: Friction formulation based on stiffness. For the edge to edge(type11) contact, we should never define friction.

Also, Type 7 contact between bumper and rail was defined.

PENETRATIONS AND INTERSECTIONS CHECKS: Before running the model all penetrations and intersections were removed by selecting the nodes and moving manually.

REVIEWING PARTS FOR CONNECTIONS: Connections between parts were checked and any floating spring or objects were removed.

RIGID WALL CREATION: An infinite plane rigid wall was created in front of the car with Dsearch= 1000 and friction 0.1 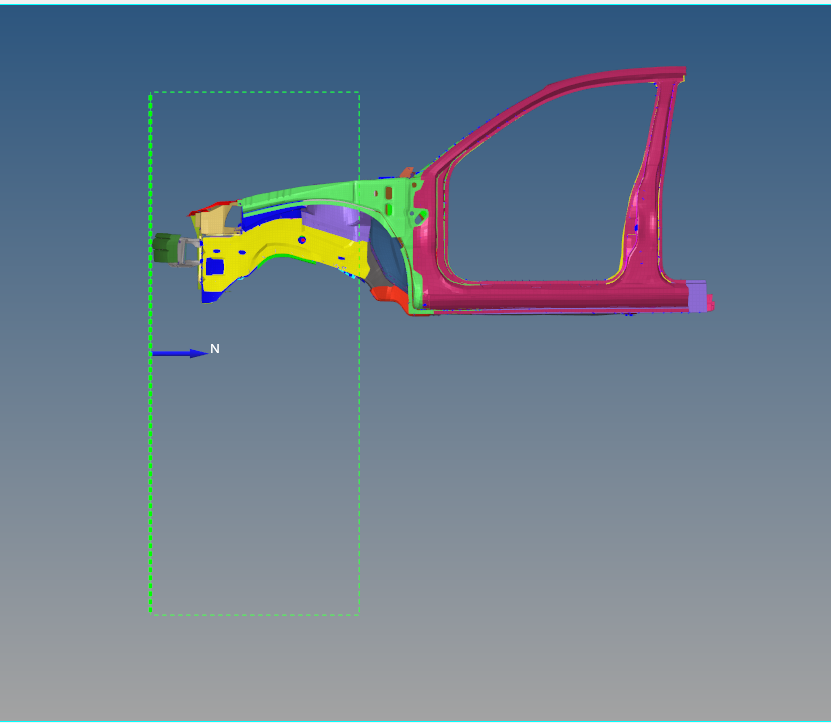 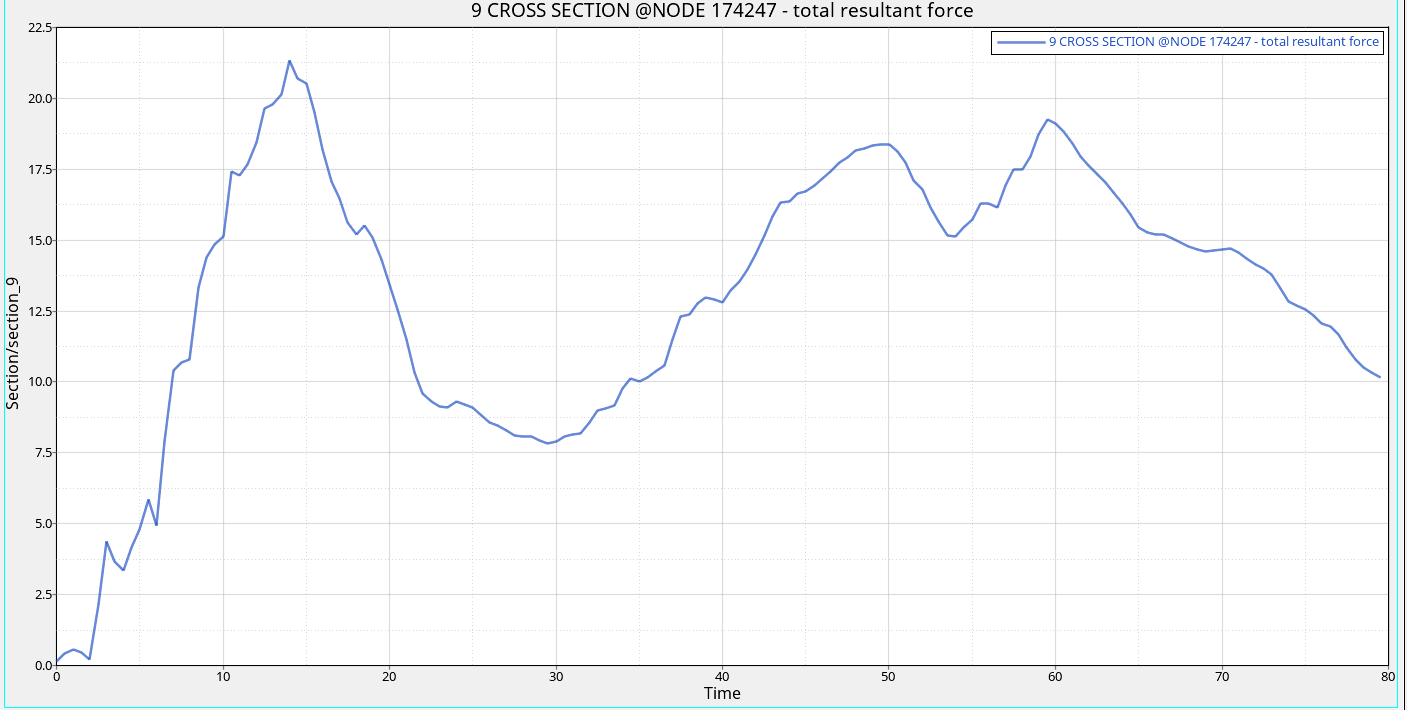 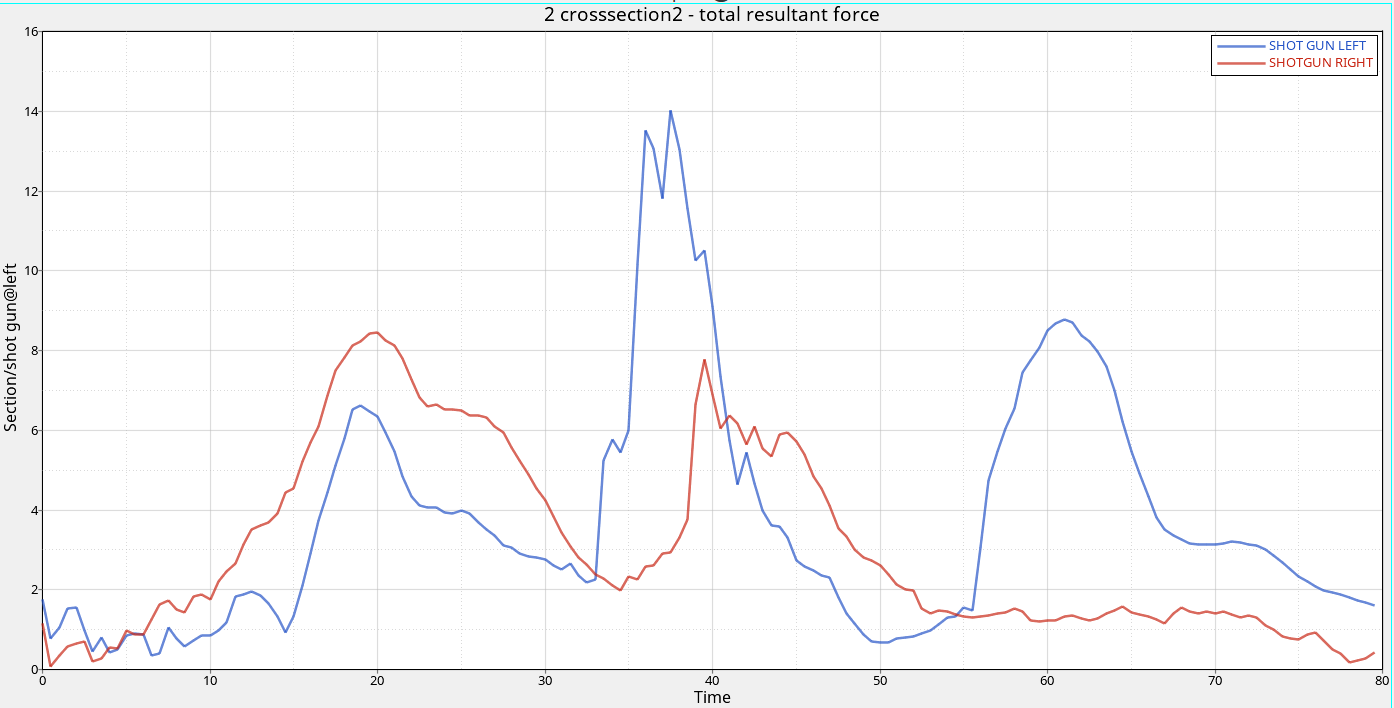 The above graph shows the sectional force received by a shotgun. The maximum force for the left section, during the collision, is 14KN at 40 milliseconds. From animation files, we can observe left shotgun deformed less, hence higher reaction force was seen. The right shotgun was deforming continuously so lesser sectional force was seen as cross-section was constantly changing. 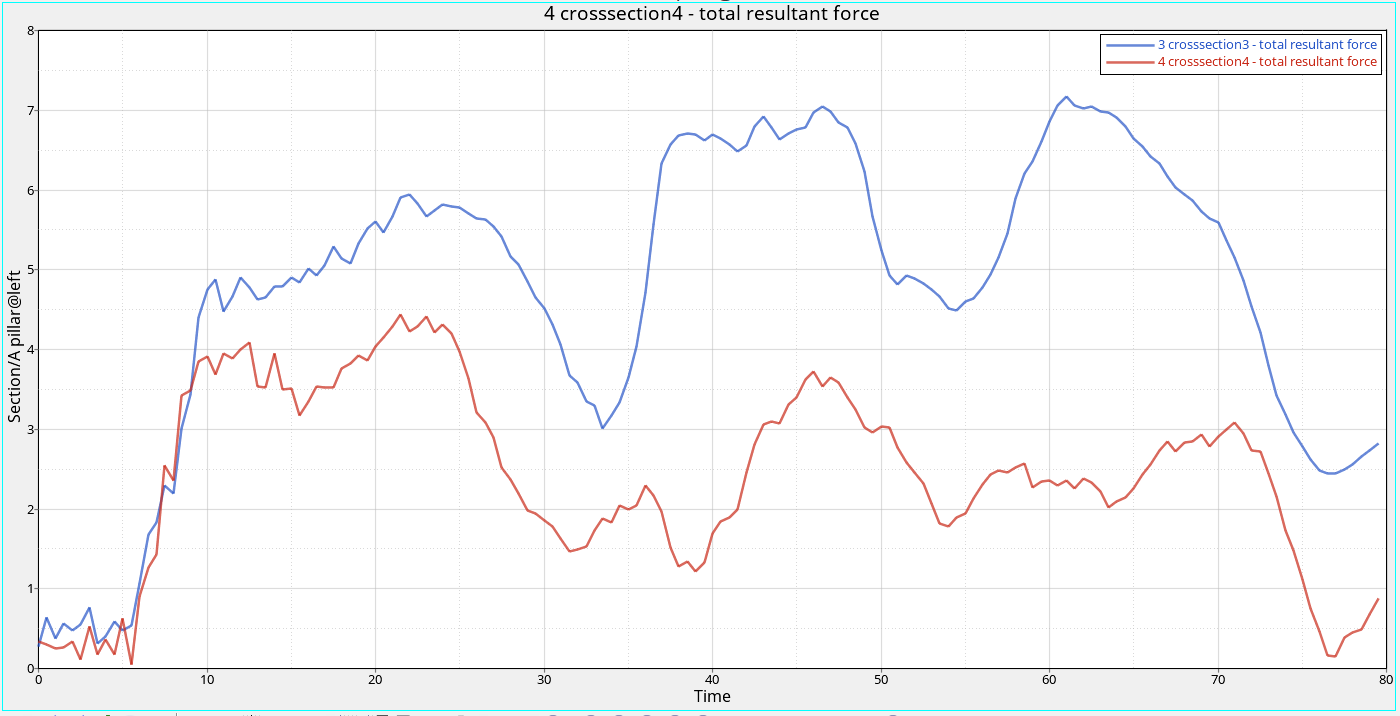 A pillar left received more reaction force during the collision. From the animation files also we can see more deformation on left A-pillar.

CROSS-SECTIONAL FORCES AT BASE OF B PILLAR: 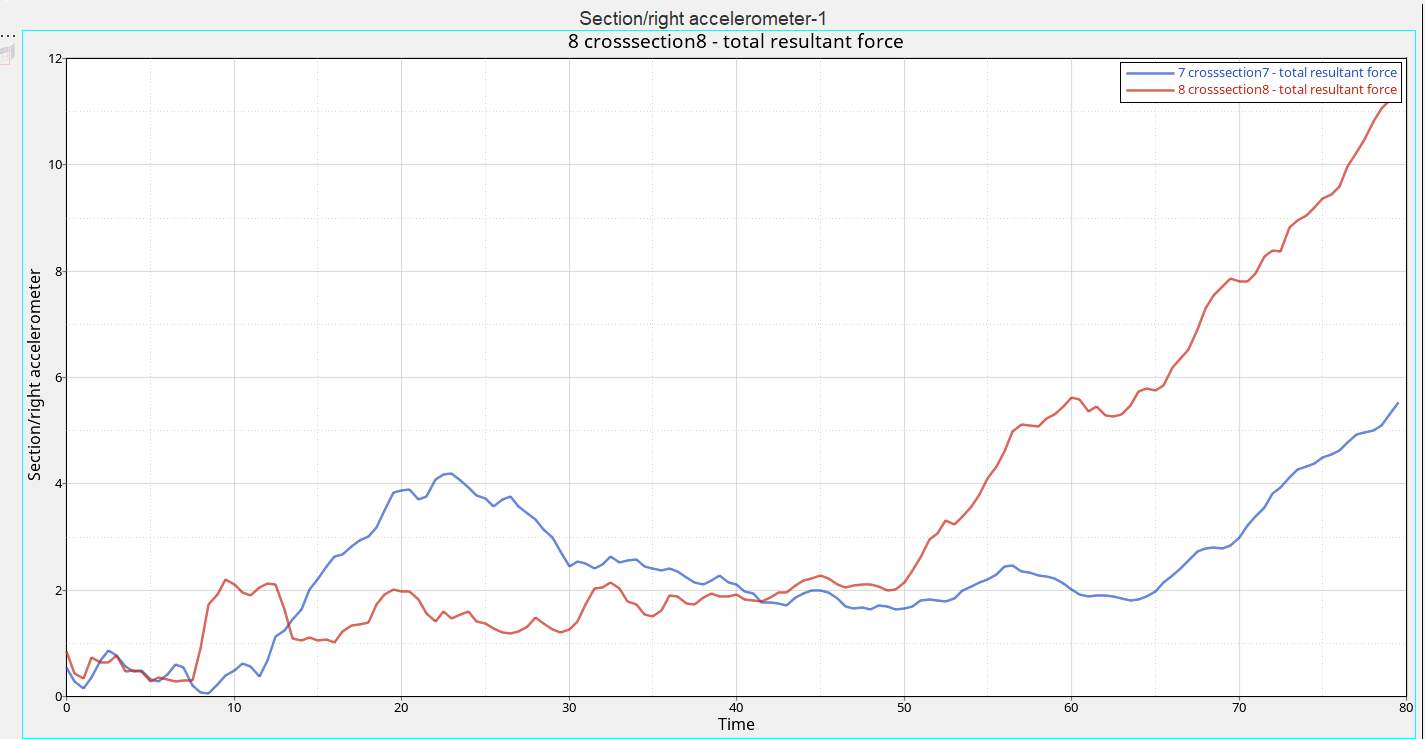 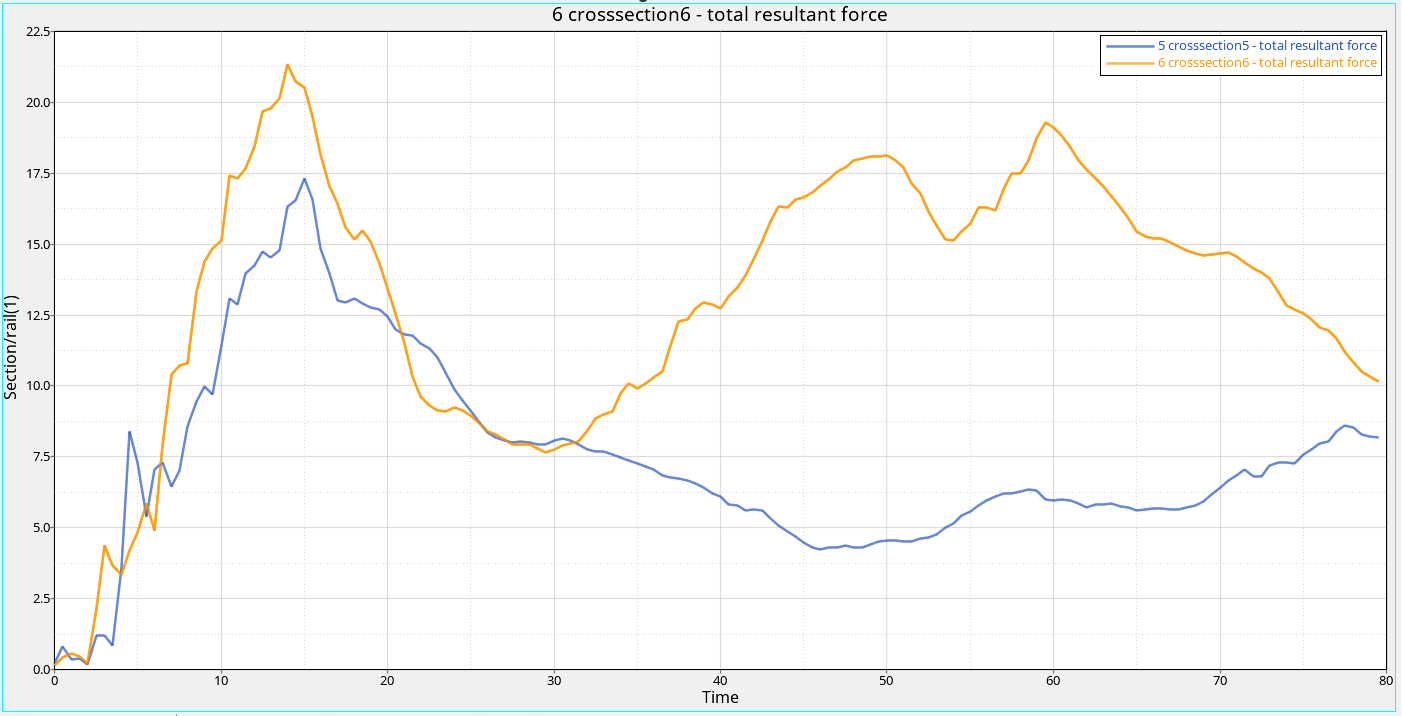 ACCELEROMETER VALUES AT BASE OF B PILLAR: 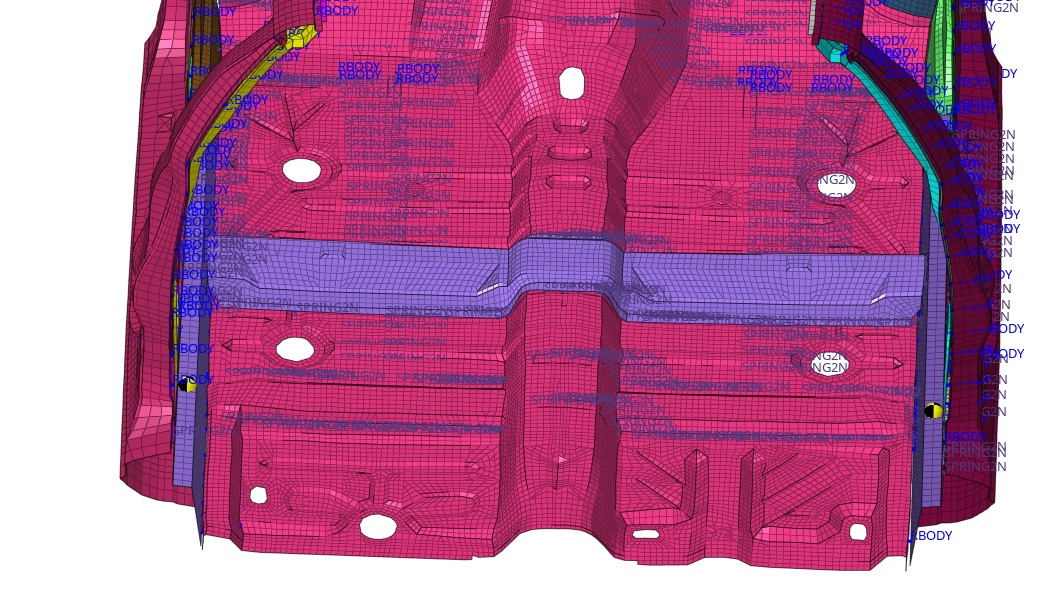 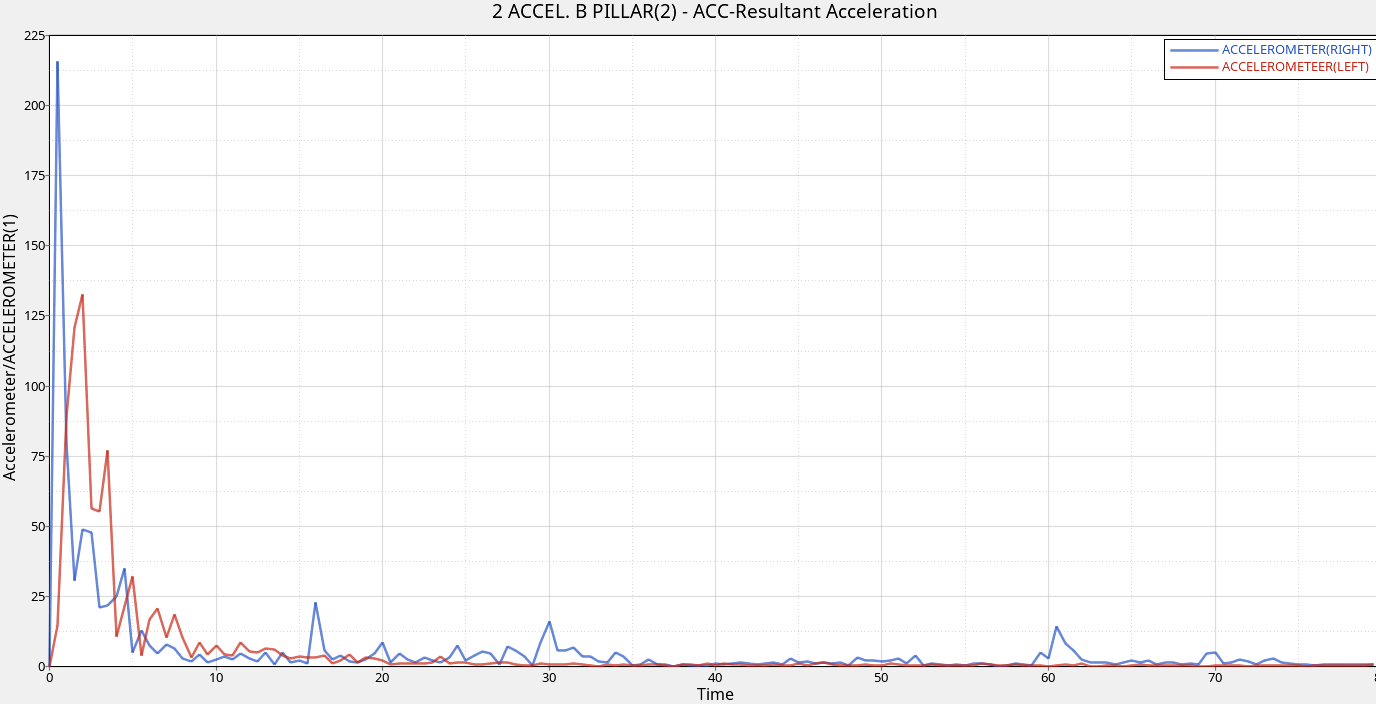 The max acceleration received is just after the collision around 2milliseconds. This sudden change in acceleration is due to the instant drop in velocity from very high value to almost zero.

The intrusion is measured with respect to node 121751.

Before collision distance between points was 734.771. 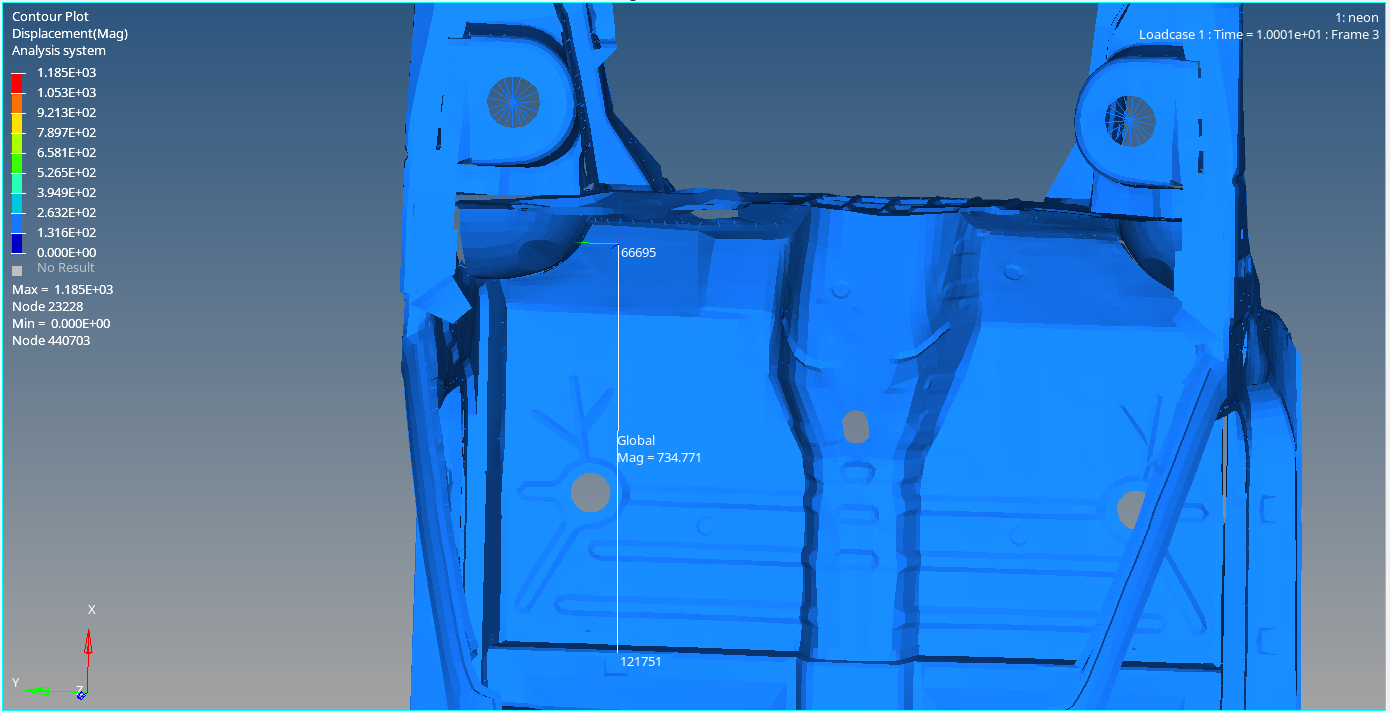 After collision distance between nodes was 597.115 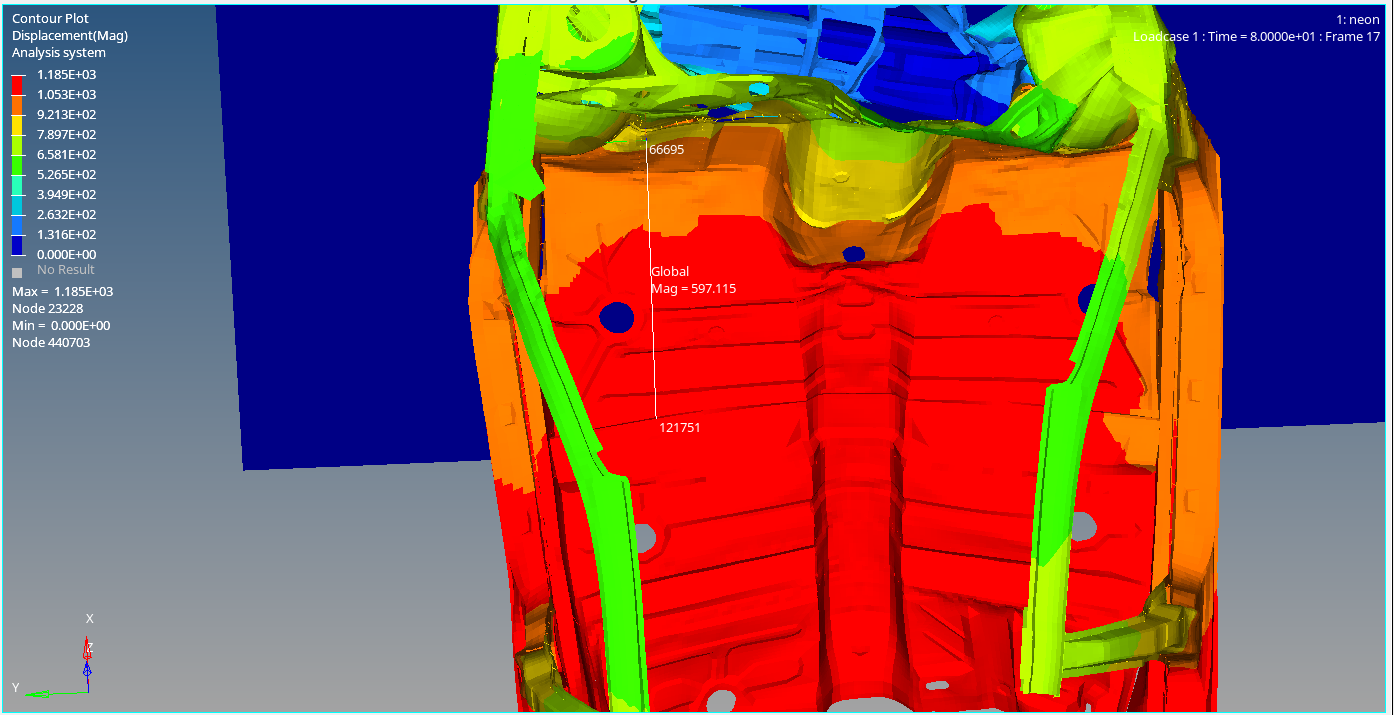 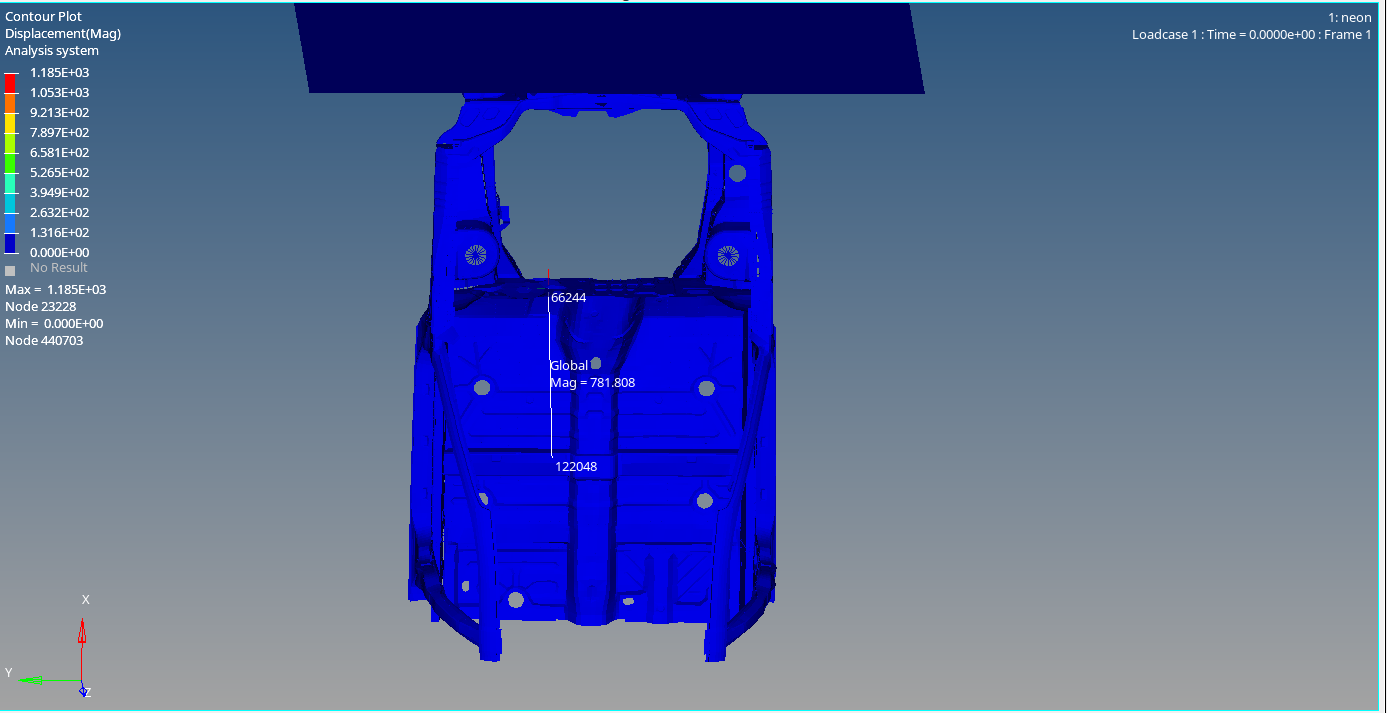 The initial distance between the two nodes was 781.808mm. 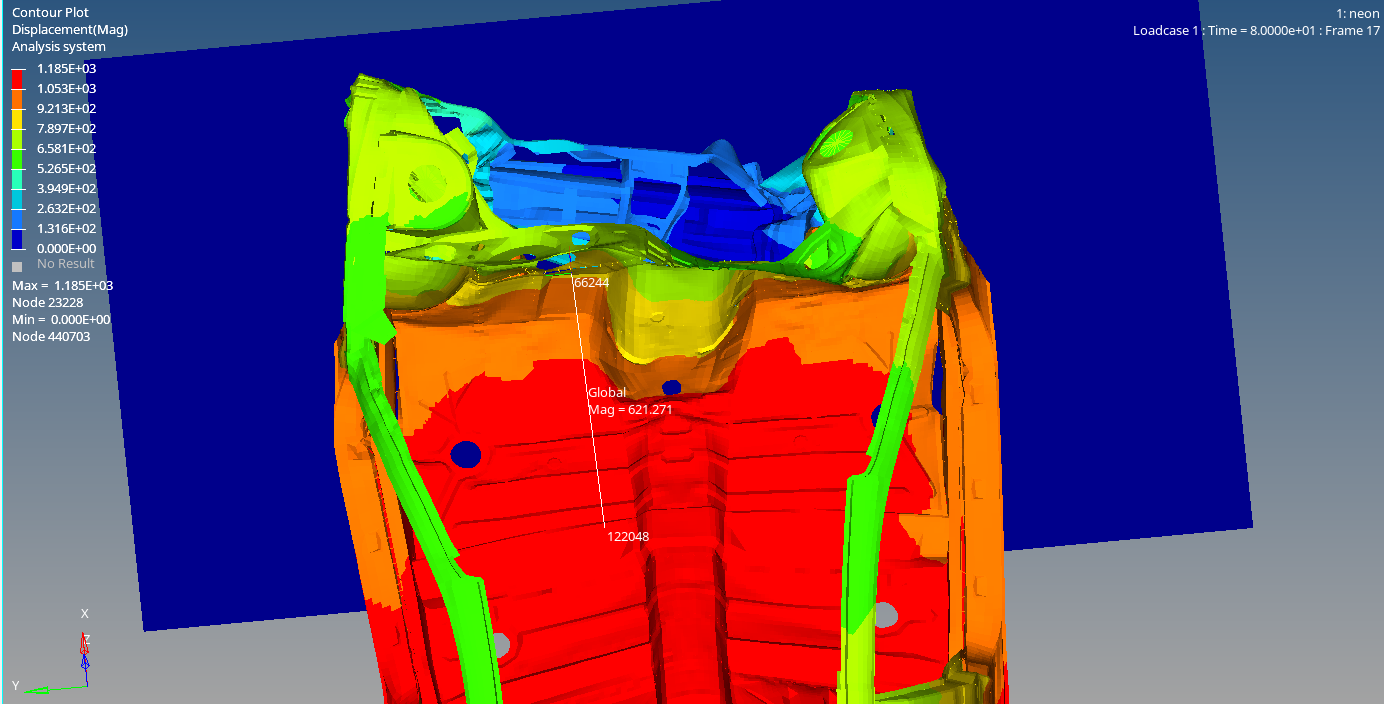 A plot of relative displacement of the node was plotted and is shown below: 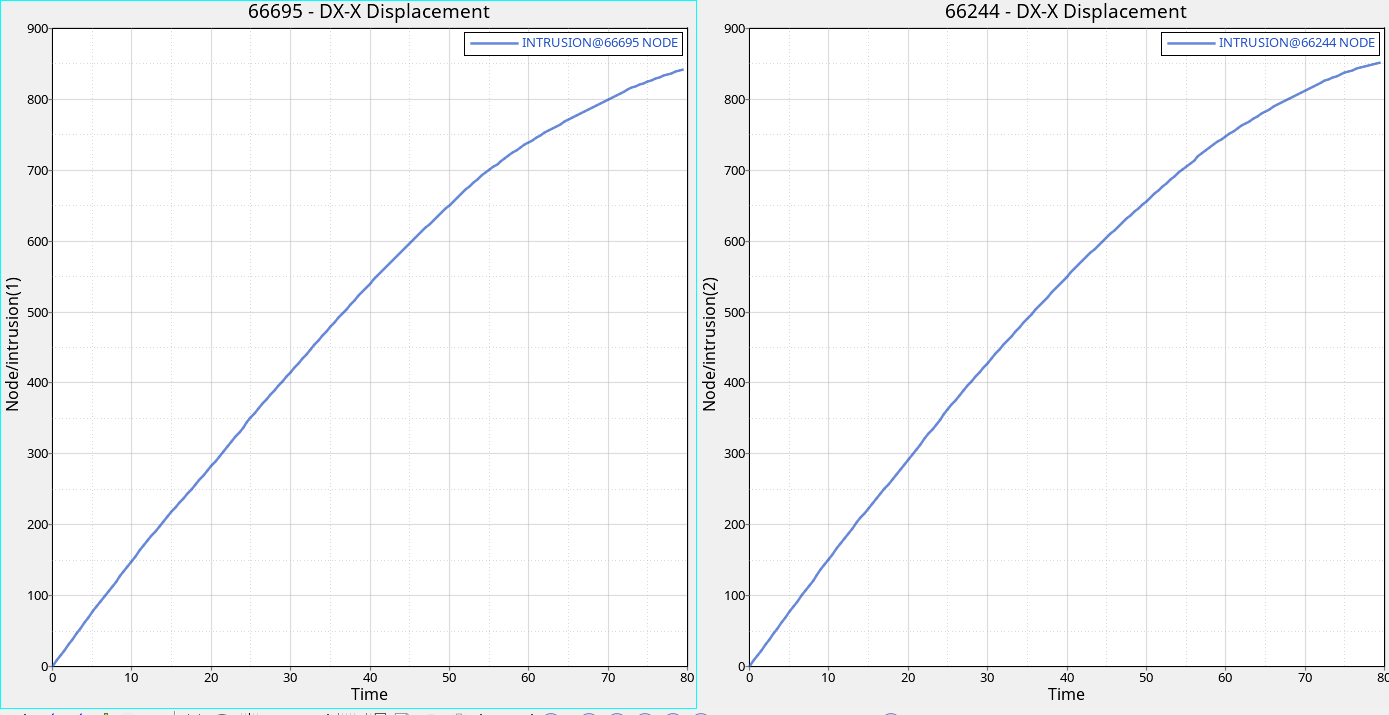 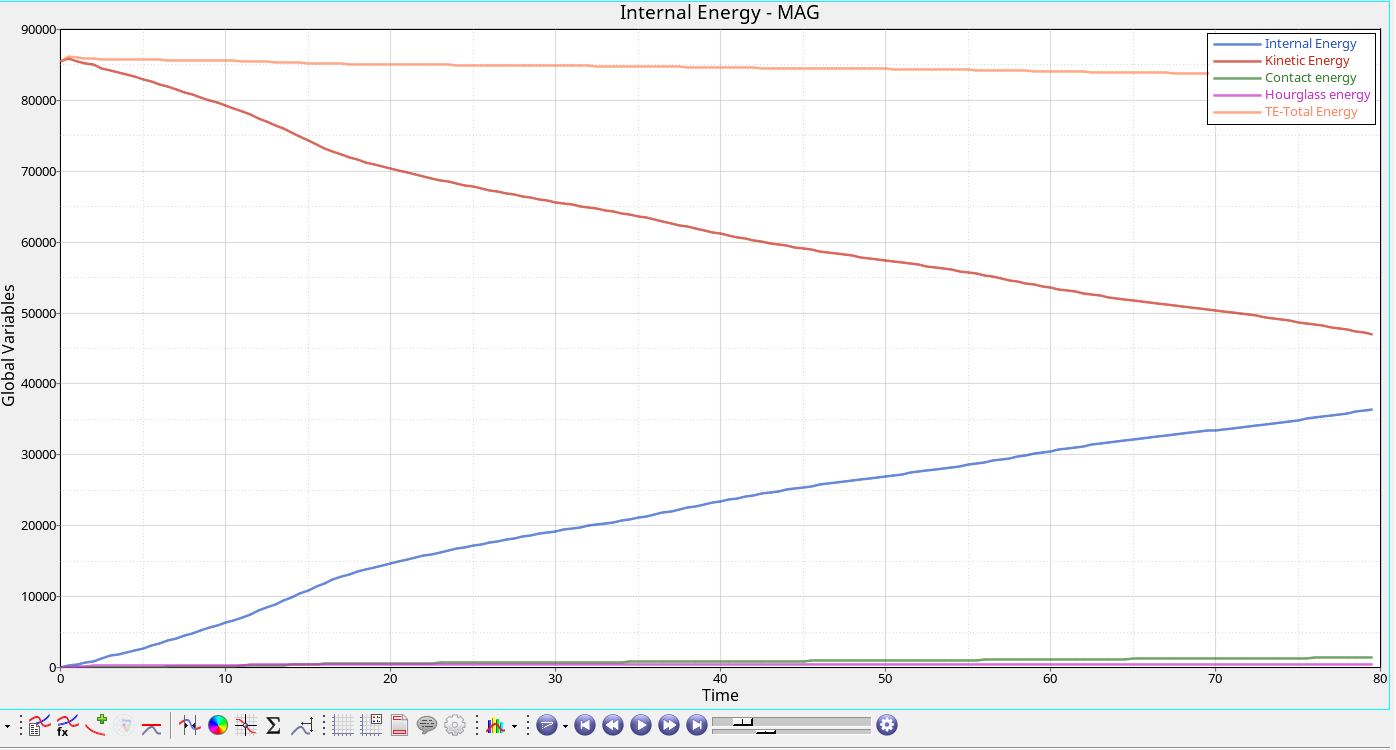 Hourglass Energy and contact energy must be maintained under recommended values. In our case due to QEPH shell formulation, HG energy was below 5%.

Max's energy error was  -1.4% which is under the recommended value.