There is a growing need to run vehicles using renewable energy sources to control global warming, meet stringent emission standards and to replace depleting fossil fuels. Because of the clean burning nature of biogas, it can be effectively used as an engine fuel [19]. Biogas is produced by the anaerobic breakdown of an organic material with the help of bacteria. Biogas is mainly produced from the environmental waste like cow dung, waste food, and other manures. Biogas is mainly composed of methane, carbon dioxide, hydrogen, nitrogen and may have a small amount of H2S (Hydrogen sulfide) traces. The CO2 and other gases in the biogas do not take part in combustion and hence the upgraded biogas containing 80 percent methane has calorific value over 25 MJ/m3 (Mega-joules per cubic meter). This high calorific value of biogas makes it be used as a fuel for automotive engines, generators and other power applications [11].

In HCCI engines, the homogeneous charge is made to auto-ignite at several points inside the combustion chamber due to increase in temperature during the compression stroke.  HCCI engines promise several advantages over conventional engines. HCCI engines operate at a very low equivalence ratio (0.2-0.5) with a highly homogeneous charge due to which the in-cylinder temperature, NOX emissions, and soot emissions are low compared with DICI (Direct injection compression ignition) engines. The absence of fuel-rich regions and low NOX emissions makes the HCCI engine the best alternative for CI (Compression ignition) engines. The main drawback of HCCI engines is there is no direct control over combustion. SI (Spark ignition) engines have spark plug while CI engines have fuel injector to control the combustion. Whereas combustion in HCCI engines is primarily controlled by the auto-ignition characteristics of the charge which gets influenced by various parameters like charge temperature, pressure and chemical kinetics of the charge. HCCI engines produce a high amount of CO and UHC emissions at low loads and high NOX emissions at peak loads. The power density is low because of its ultra-lean operating conditions and undergoes knocking at higher equivalence ratios [10]. Scott B et al [12] used natural gas-fueled HCCI engine operating with higher compression ratios (approximately 17-20:1) at an equivalence ratio of 0.2 to 0.5. They reported indicated thermal efficiency close to 45 % and NOX emissions between 75 to 200 ppm. Burning rates should be controlled to avoid a high rate of pressure rise otherwise it could lead to knocking. The higher amount of CO2 in biogas composition retards the rate of pressure rise [5]. The presence of CO2 in biogas not only reduces NOX emissions but also helps achieve higher compressions ratios without knocking [2]. Diluents and fuel blends are used to control combustion in HCCI engines [13]. Low auto-ignition temperature of diethyl-ether makes it suitable to be used as an ignition improver in biogas fueled engines and hence avoiding high intake charge temperature requirements which could possibly increase the volumetric efficiency and the load range [14].

Generally, thermodynamic models such as Single-zone, multi-zone, probability-based and multi-dimensional CFD models are used to simulate HCCI engines. Single zone models can accurately predict the crank angle for auto-ignition of the charge, fuel blend characteristics and NOx emissions but overpredicts peak pressure and underpredict UHC emissions. Though multi-zone models can reasonably predict the maximum in-cylinder pressure and emissions it doesn’t include the spatial temperature stratification. Three dimensional CFD simulations with detailed chemical kinetics can accurately predict the engine performance and emissions characteristics, as it accurately defines the charge motion within the combustion chamber including turbulence and spatial temperature stratification [8].

The aim of this project is to study the effect of different biogas composition on combustion phasing, combustion stability and emission characteristics of a biogas-fueled HCCI engine. To achieve this objective, a three-dimensional CFD (Computational fluid dynamics) model with detailed chemical kinetics is used. CONVERGE 2.3 is the CFD tool used to model the simulation. The GRI-Mech 3.0 is the reaction mechanism used for the combustion simulation. The simulations were executed for two equivalence ratios (0.2 and 0.3). The effect of intake charge temperature is studied for a higher and a lower methane concentration in biogas composition. The simulation is executed from IVC (Inlet valve closing) to EVO (Exhaust valve opening). A 60° sector geometry is created from the “make engine sector surface” utility in CONVERGE. Figure 1 shows the front view of the engine model. The top and side view of the engine model is depicted in Figure 2 and 3. 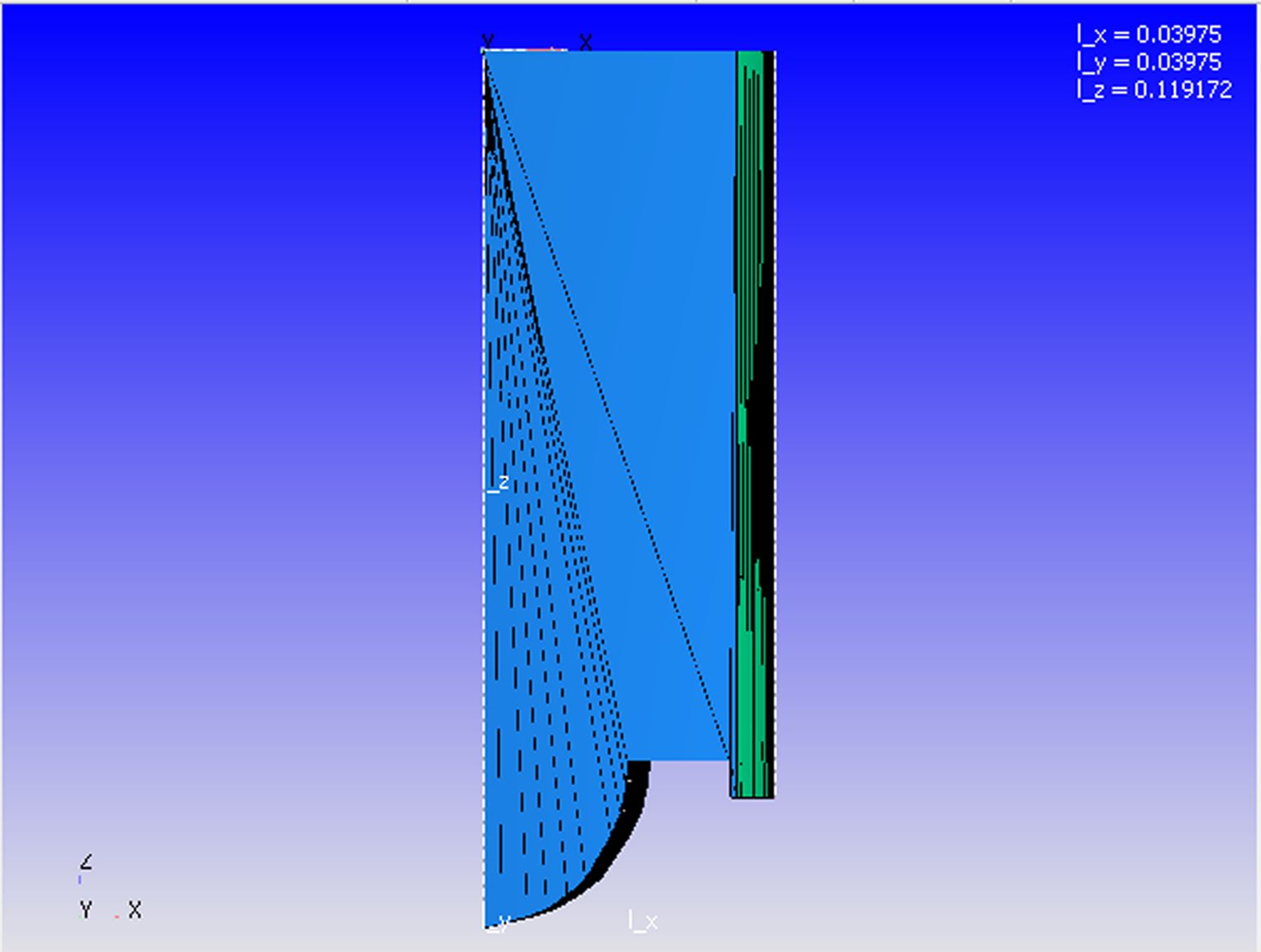 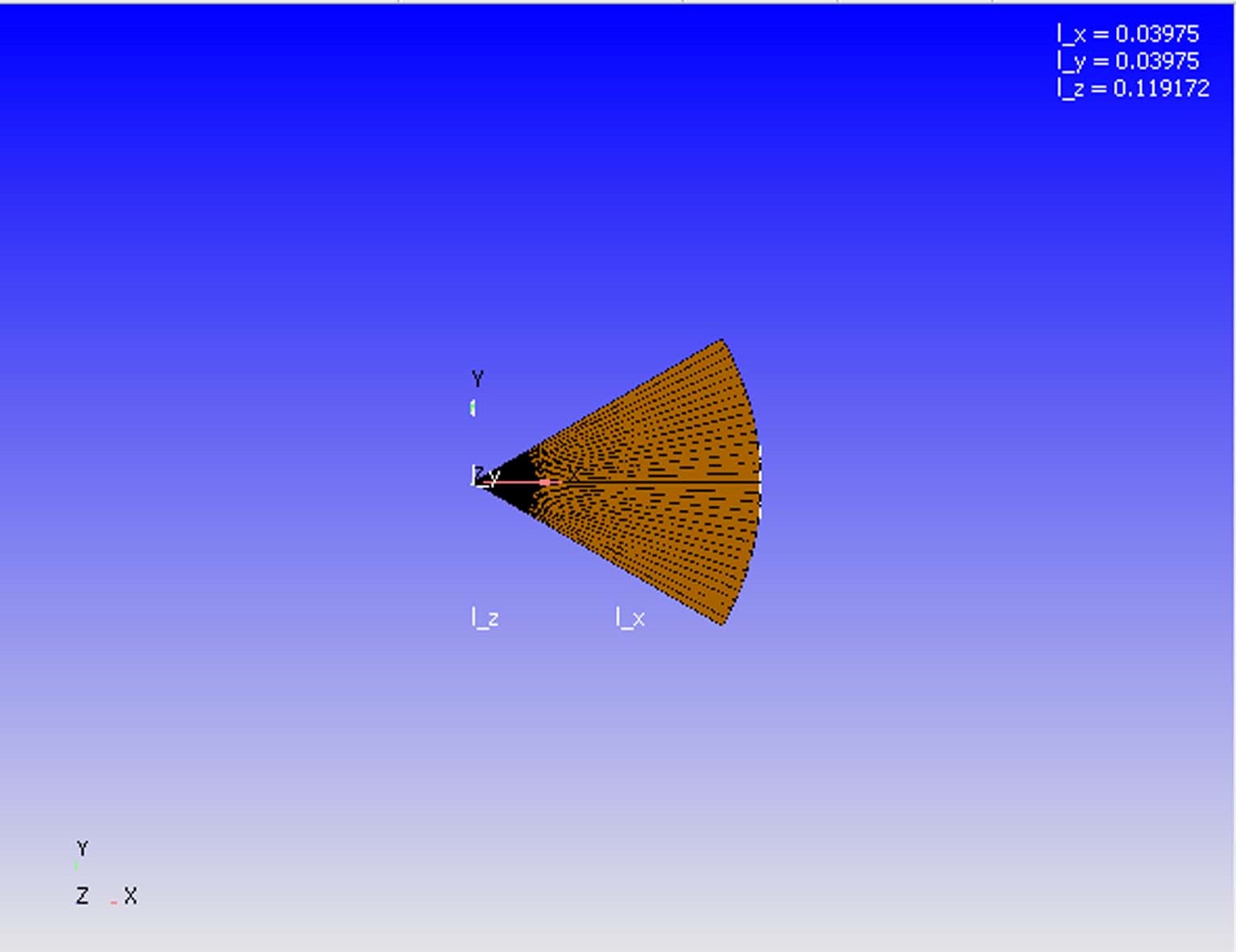 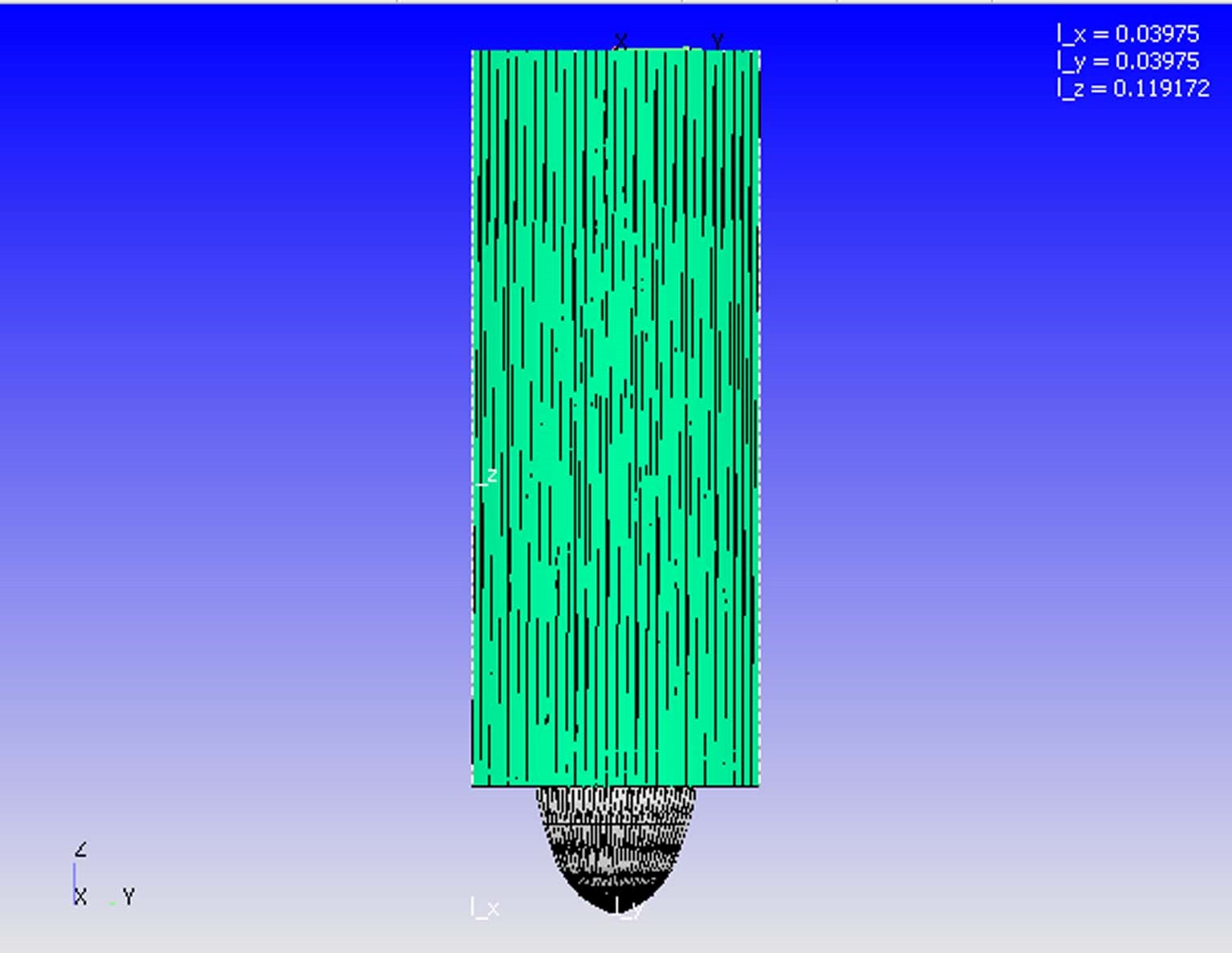 The engine used for simulation studies is a water cooled, single cylinder four stroke diesel engine with a compression ratio of 17. The specifications of the engine are given in Table 1.

Specifications of the engine [4]

Flagging the Boundaries and Setting Up of Compression Ratio

Engine liner, engine head, piston, front and back face boundaries are flagged accordingly. The desired compression ratio has been set up for the geometry.

The GRI-Mech 3.0 gas data and reaction mechanism files are imported and the simulation time parameters are fixed with values suggested by the CONVERGE. The compressible flow solver is used for internal combustion engine simulations. The simulation is executed from IVC to EVO. The variable time step algorithm is used to change the time step as per the solver conditions.

The head and liner are made as a wall boundary, while the piston is made as a translating boundary. The front and back boundaries are made as symmetric boundaries with a sector angle of 60 degrees. The initial conditions such as temperature and boost pressure at IVC for the in-cylinder simulation are taken as 473 K and 2 bar from the literature [5]. The turbulence initialization is done with the recommended values from CONVERGE. The mass fraction of the air-fuel mixture is calculated with help of the combustion equation of biogas and air. The stoichiometric air-fuel ratio and lower heating value for various biogas compositions are shown in Table 2. As seen from the Table 2, the increase in methane concentration in the biogas increases the lower heating value of the fuel.

The SAGE detailed chemical kinetics solver is used for the combustion modeling. Converge includes the multizone model which accelerates the chemistry calculations by grouping together similar computational cells and then invoking the chemistry solver once per group rather than once per cell. In the multizone model, at any given time t, each cell is at some thermodynamic state. Based on the thermodynamic states of the cells, CONVERGE groups the cells into zones. The thermodynamic state of each zone is based on the average temperature and composition of all the cells in that zone. Converge invokes the chemistry solver once on each zone. The RNG-K-EPSILON model was used for turbulence modeling. The various turbulence constants values are used based on the recommended values from CONVERGE.

Autonomous meshing is carried out during the runtime in CONVERGE which ease up the complex meshing process. Here, the cut cell technique is used to merge the cells to avoid cell interference and the grid independent study is carried out to ensure that the simulation results are not affected by the variation in grid size. The adaptive mesh refinement technique is used to refine the boundaries based on the fluctuating physical variables such as temperature and velocity. The fixed embedding option is used to improve the cell counts in regions which are very sensitive such as engine combustion chamber and cylinder head regions.

Grid independence studyThe grid independence study is carried out to ensure that the solution is not affected by the change in the mesh size. The simulation is executed for two cases: 1,00,000 and 1,50,000 cells. As seen in Fig 4, the pressure curves for both the cases matched perfectly. 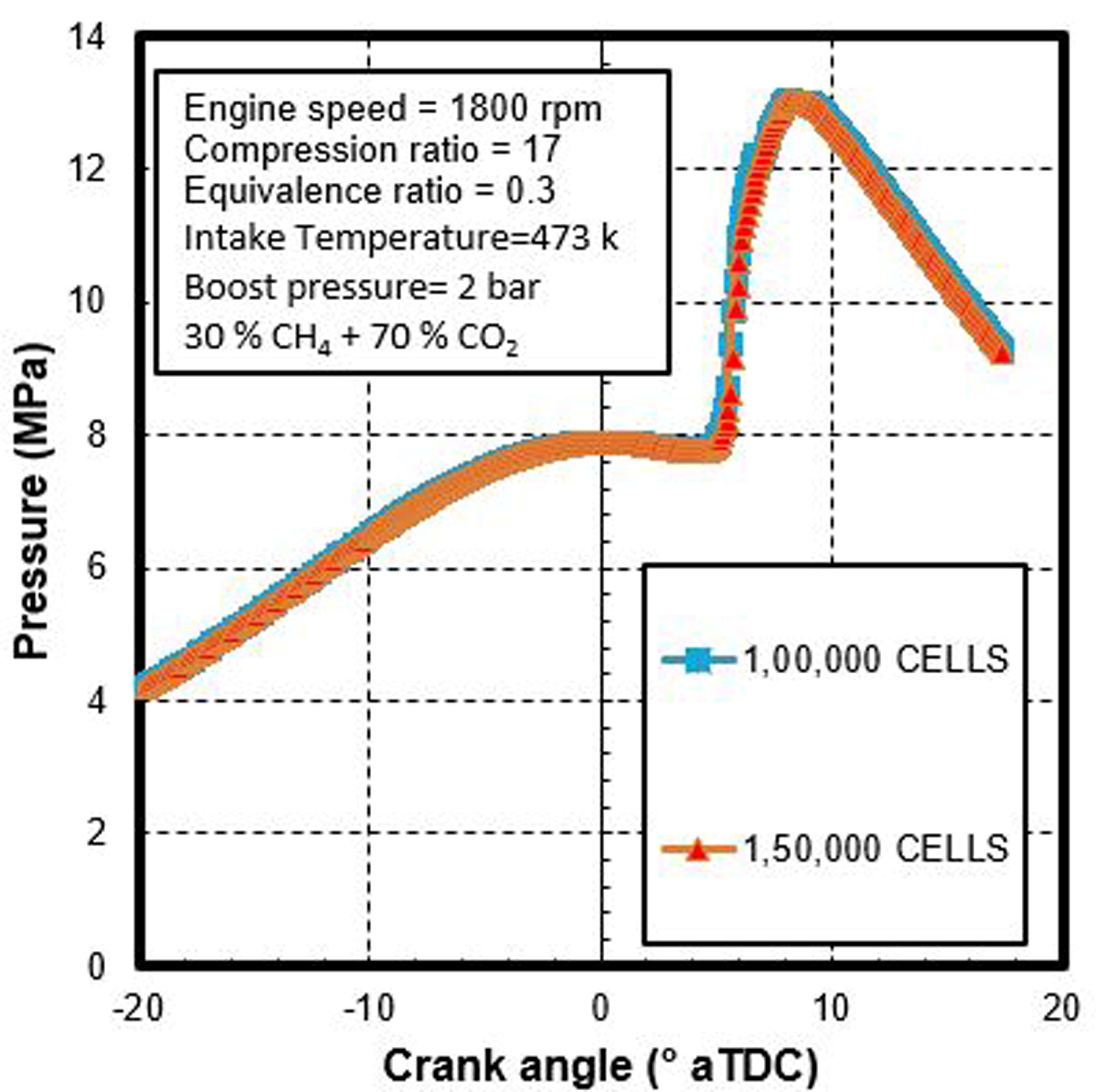 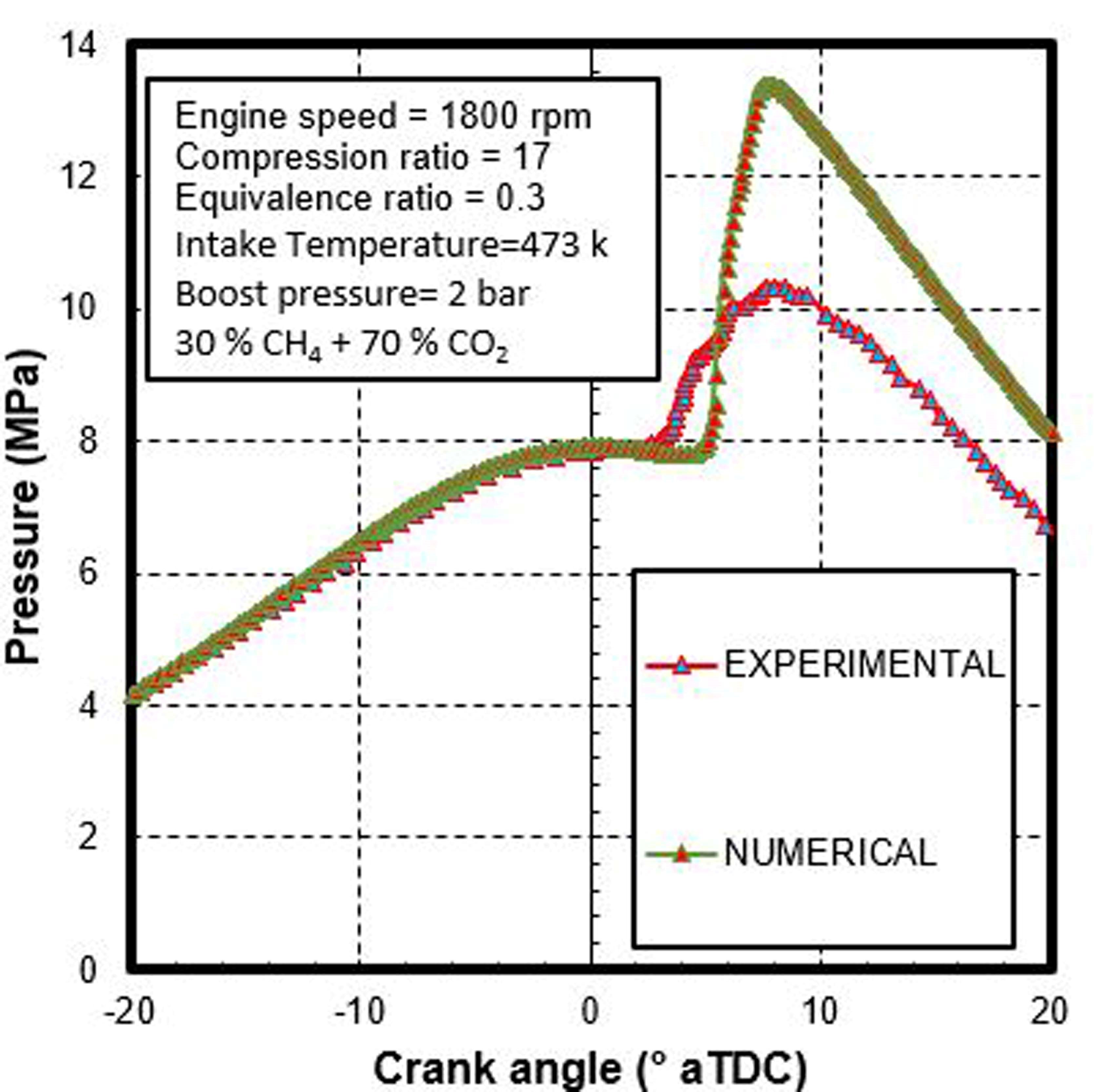 Figure 5. Variation of experimental and simulated pressure traces with the crank angle 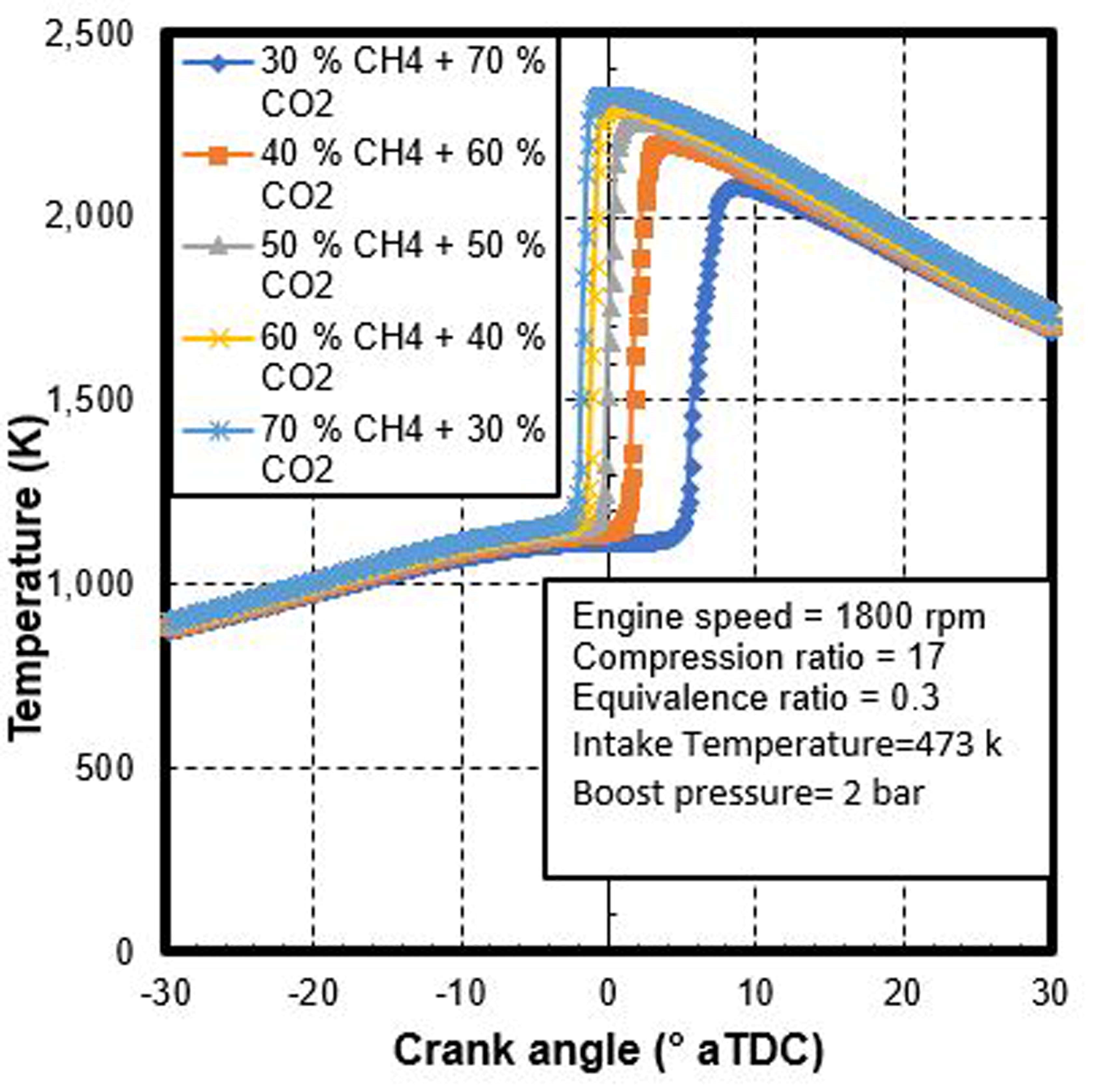 Figure 6. Variation of in-cylinder temperature with the crank angle 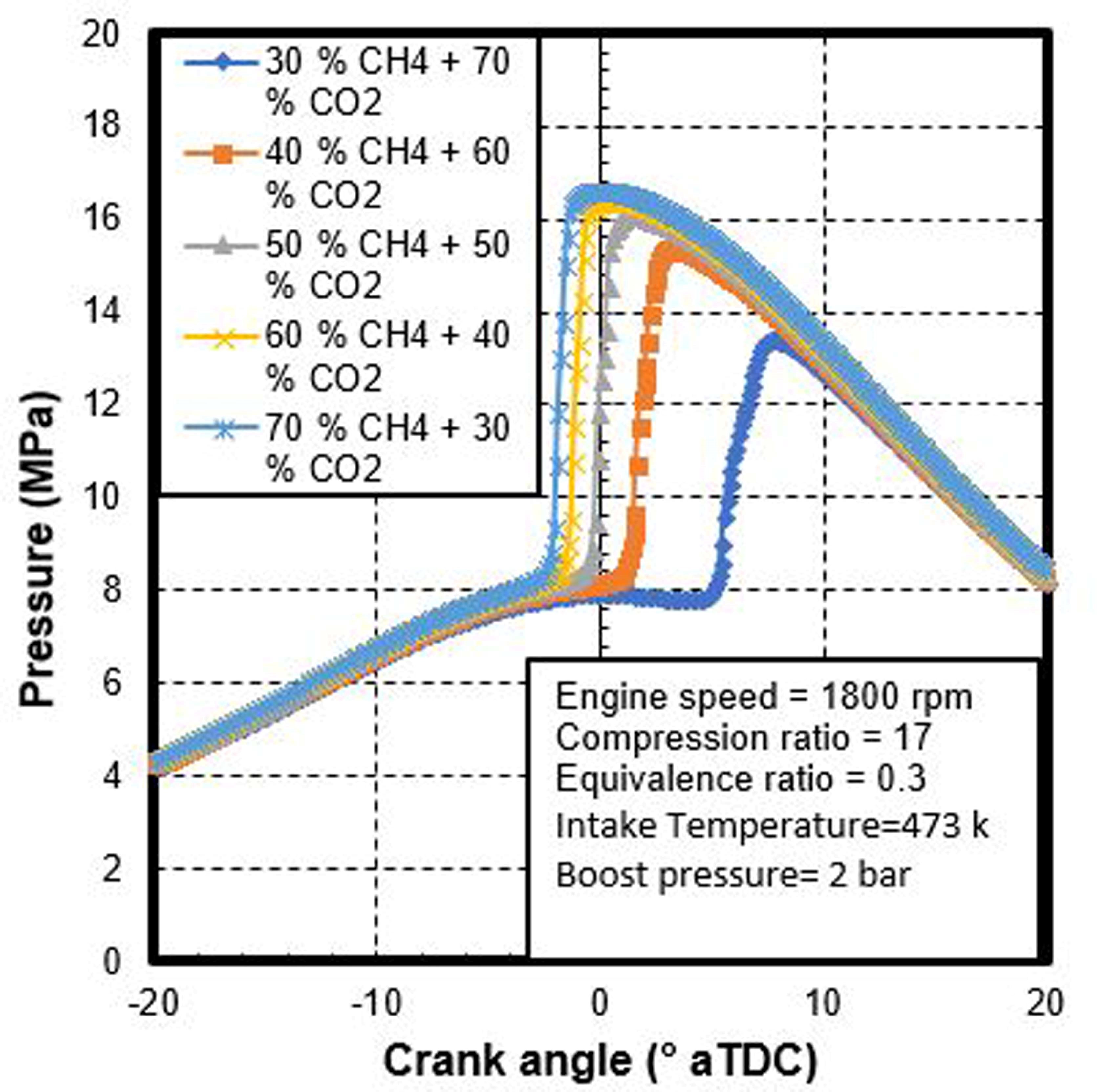 Figure 7. Variation of in-cylinder pressure with the crank angle 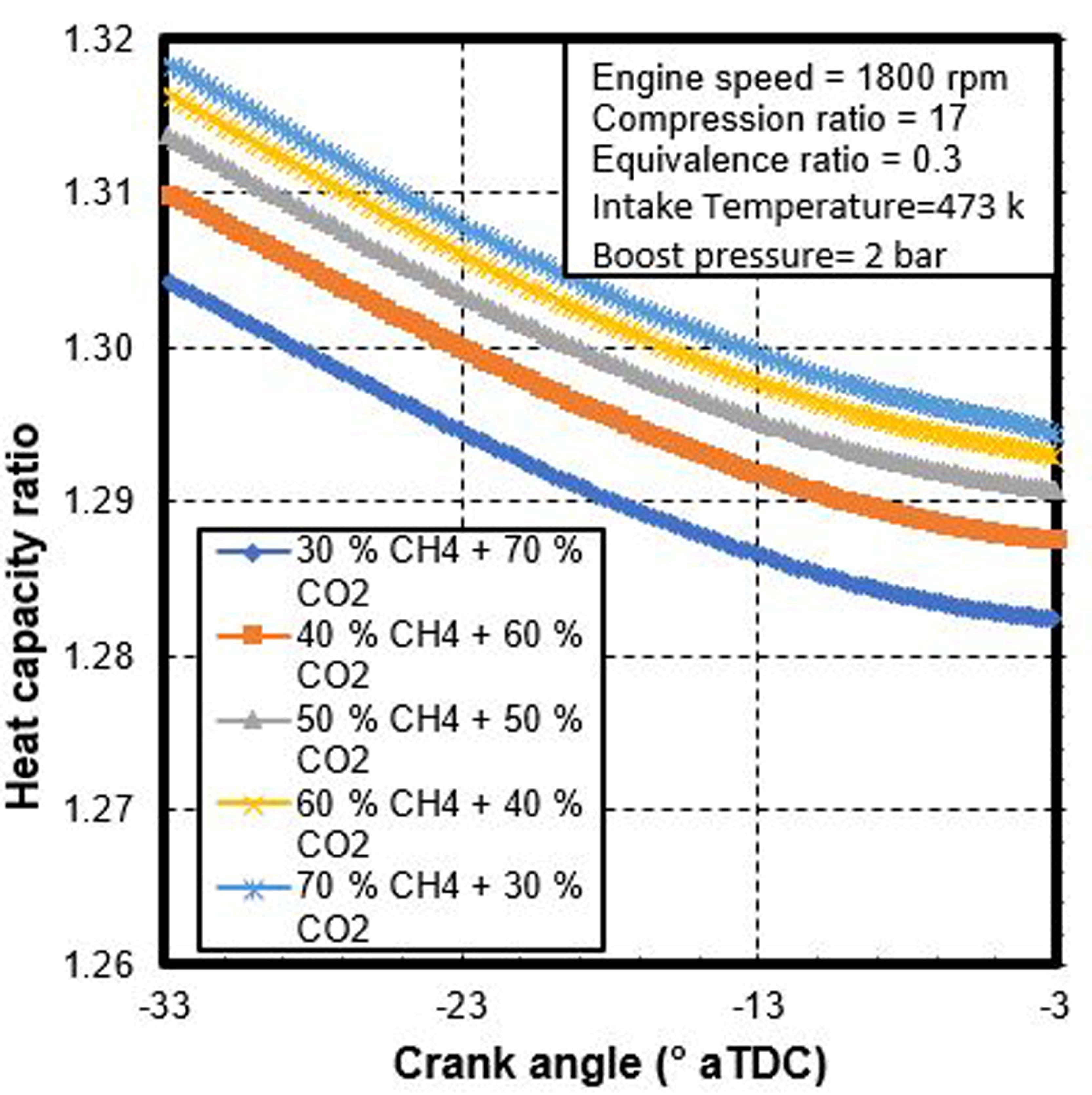 Figure 8. Variation of heat capacity ratio with the crank angle 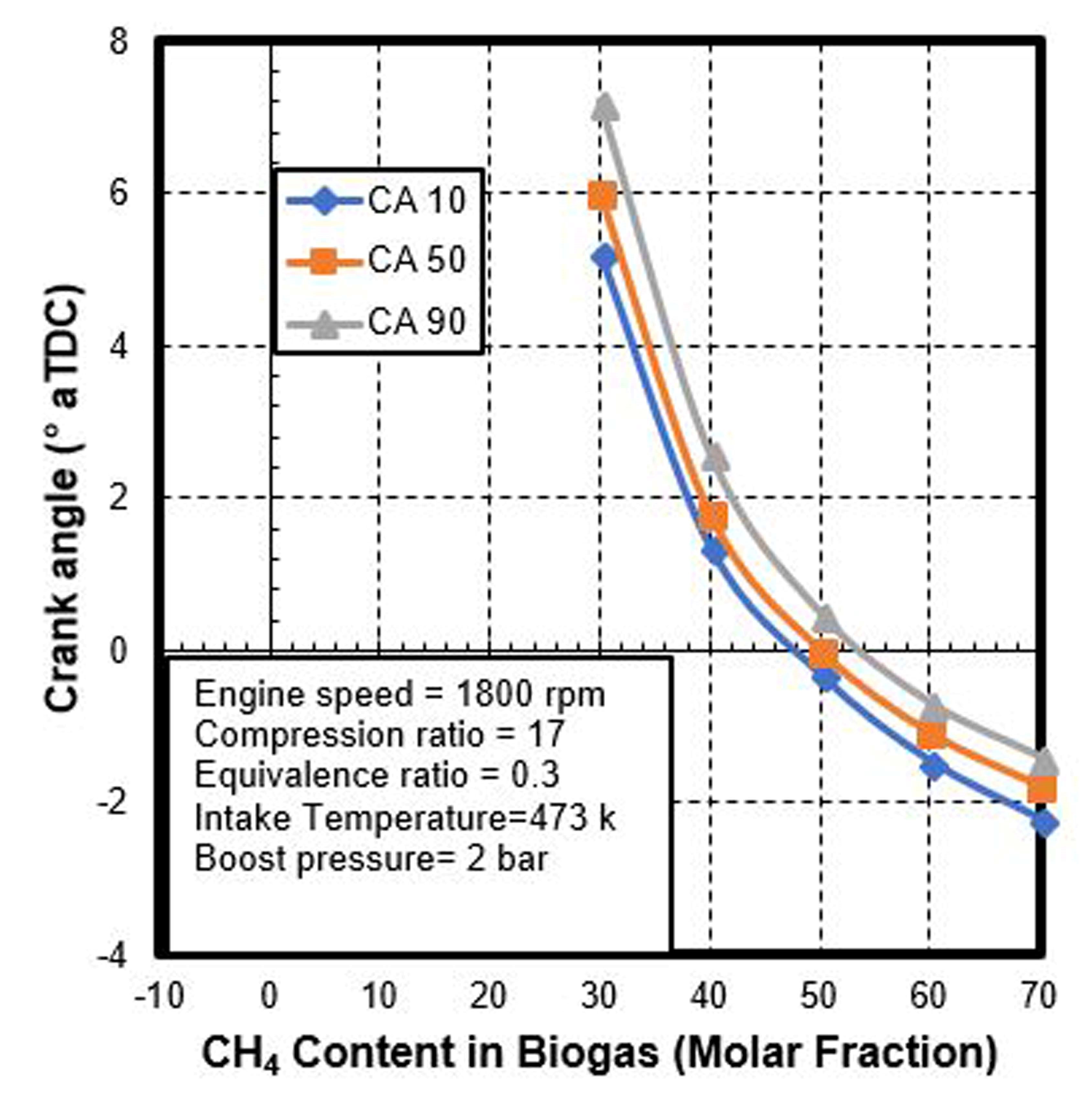 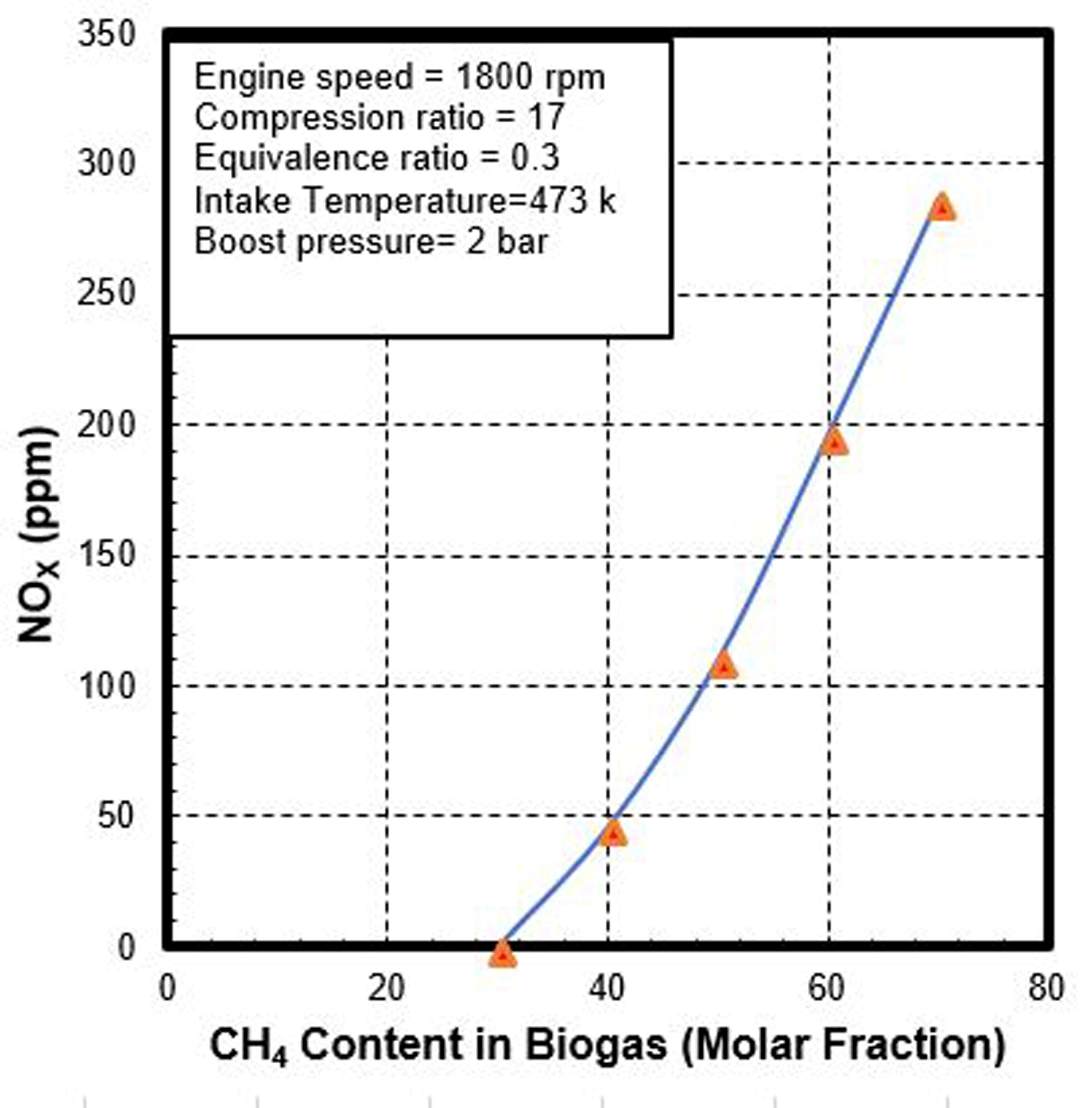 Figure 10. Variation of NOX emission with the varying CH4 concentration 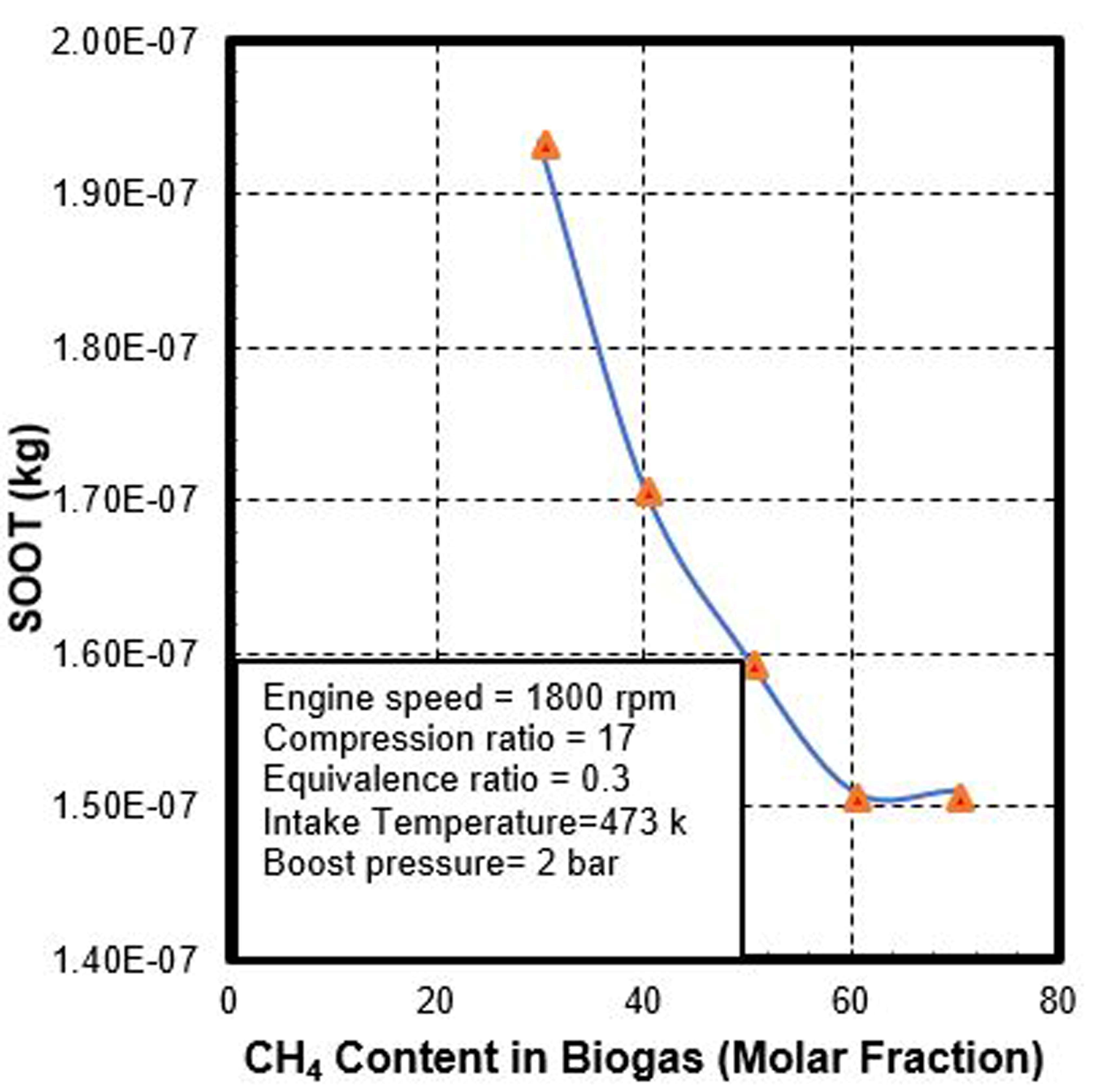 Figure 11. Variation of SOOT with the varying CH4 concentration 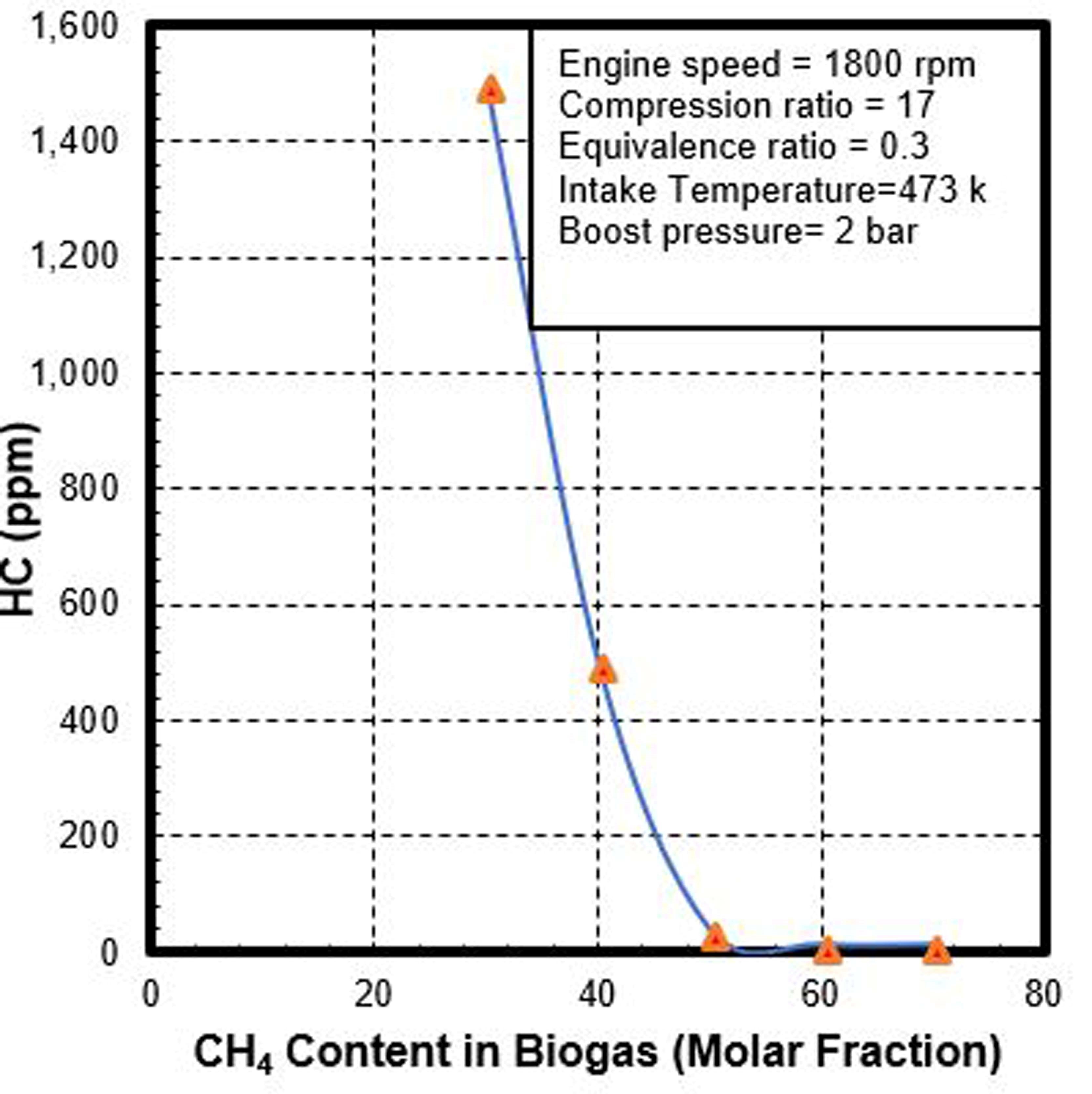 Figure 12. Variation of HC emission with the varying CH4 concentration 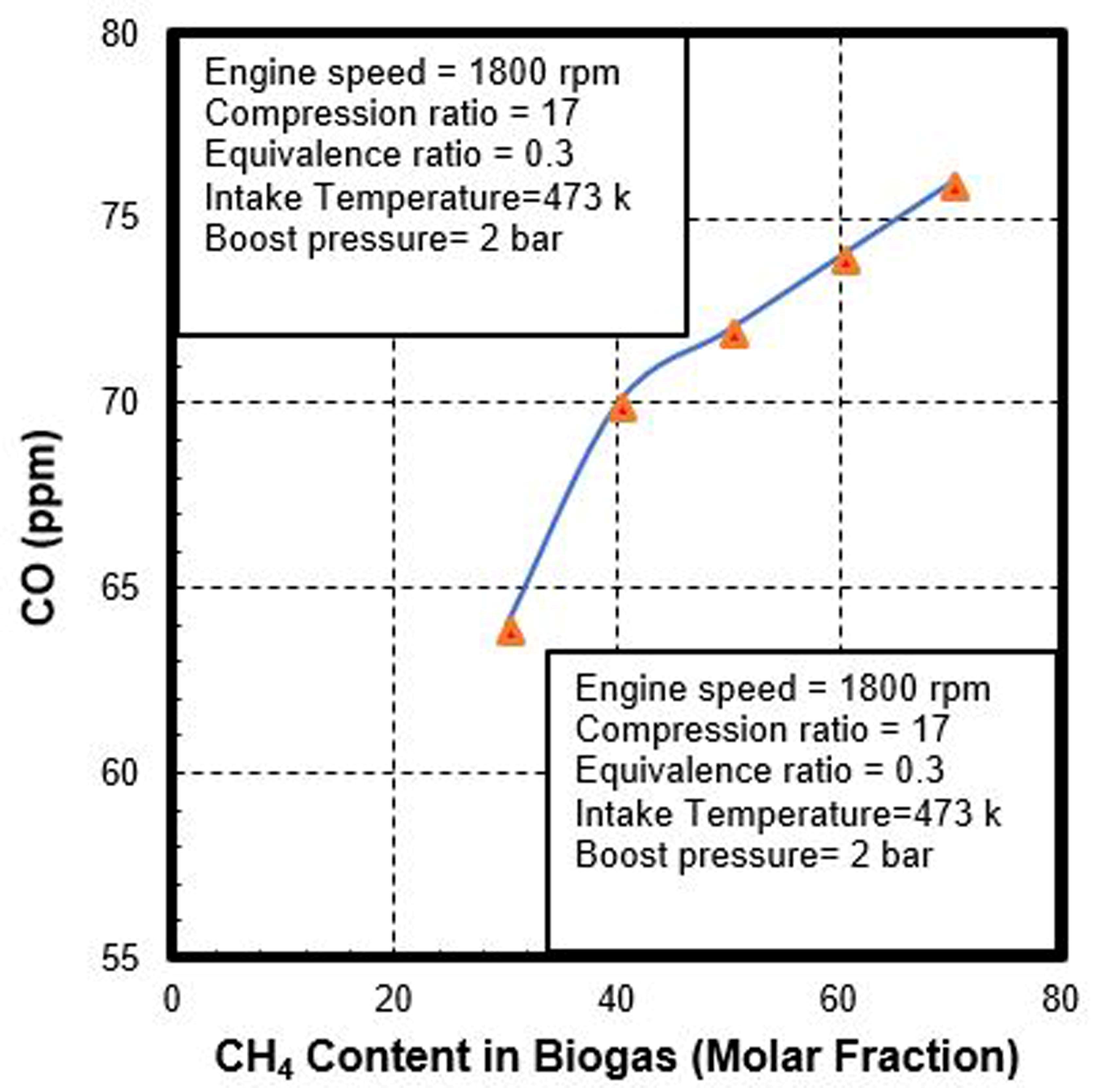 Figure 13. Variation of CO emission with the varying CH4 concentration 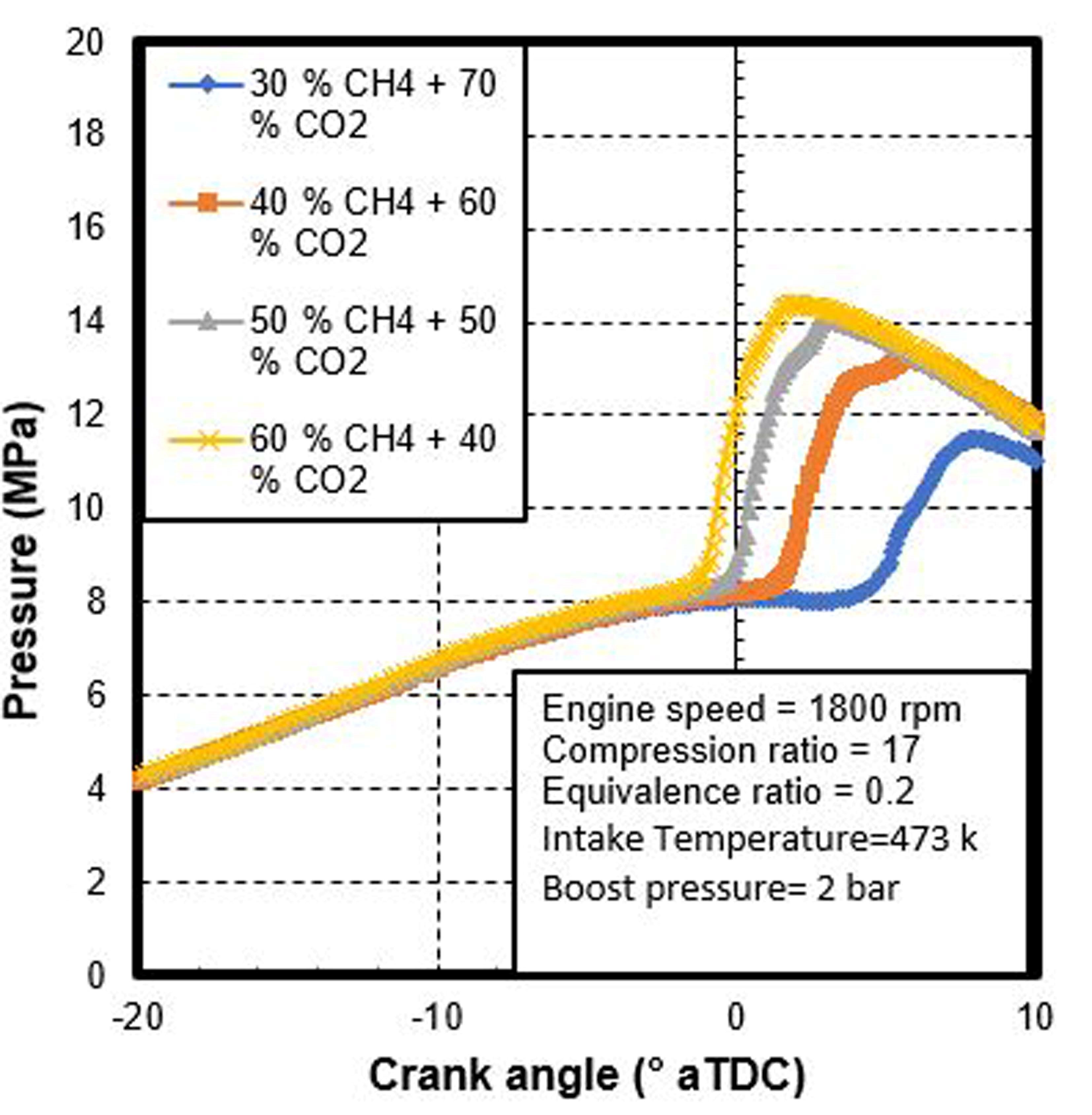 Figure 14. Variation of in-cylinder pressure with the crank angle for ⏀=0.2 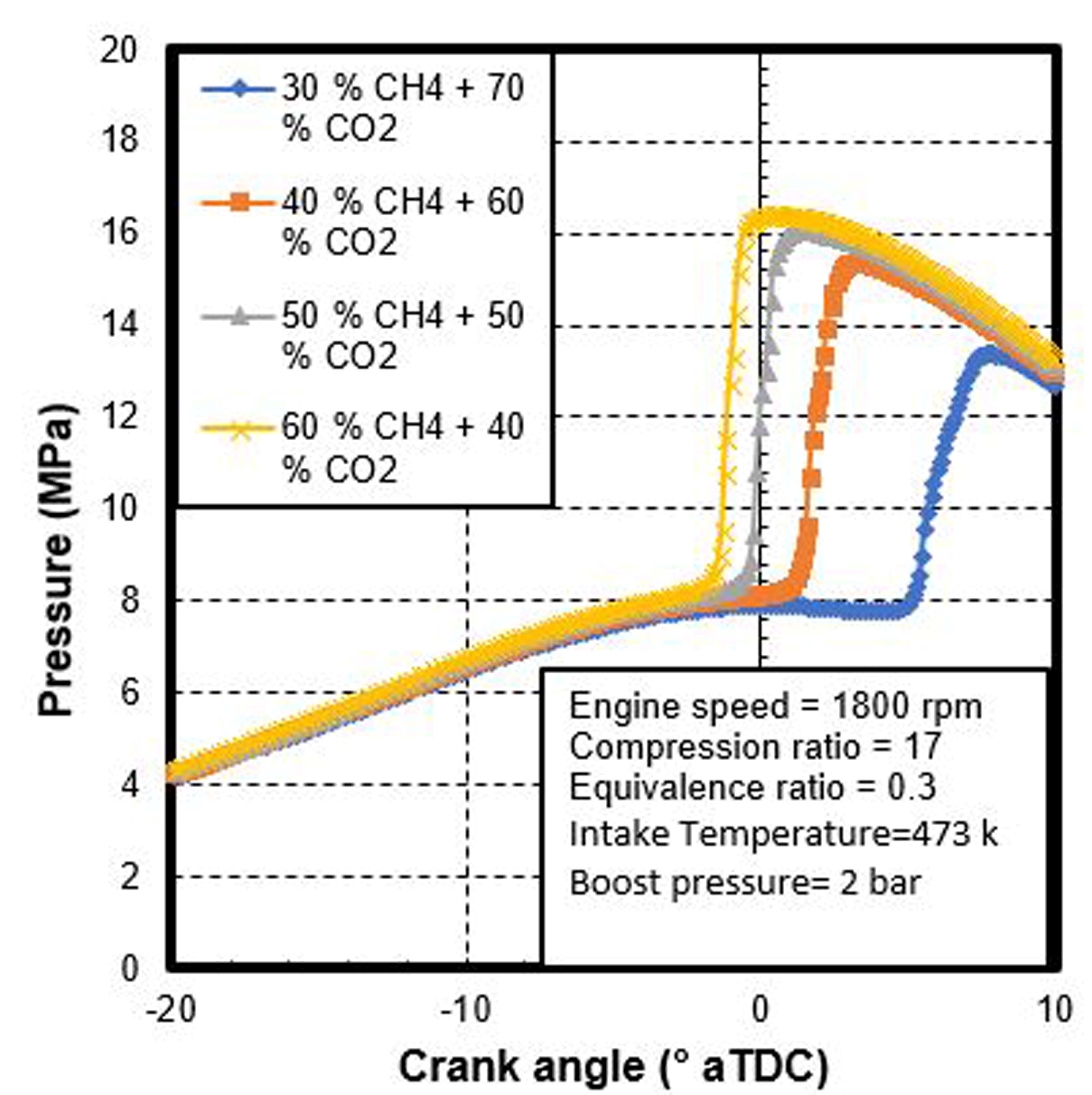 Figure 15. Variation of in-cylinder pressure with the crank angle for ⏀=0.3 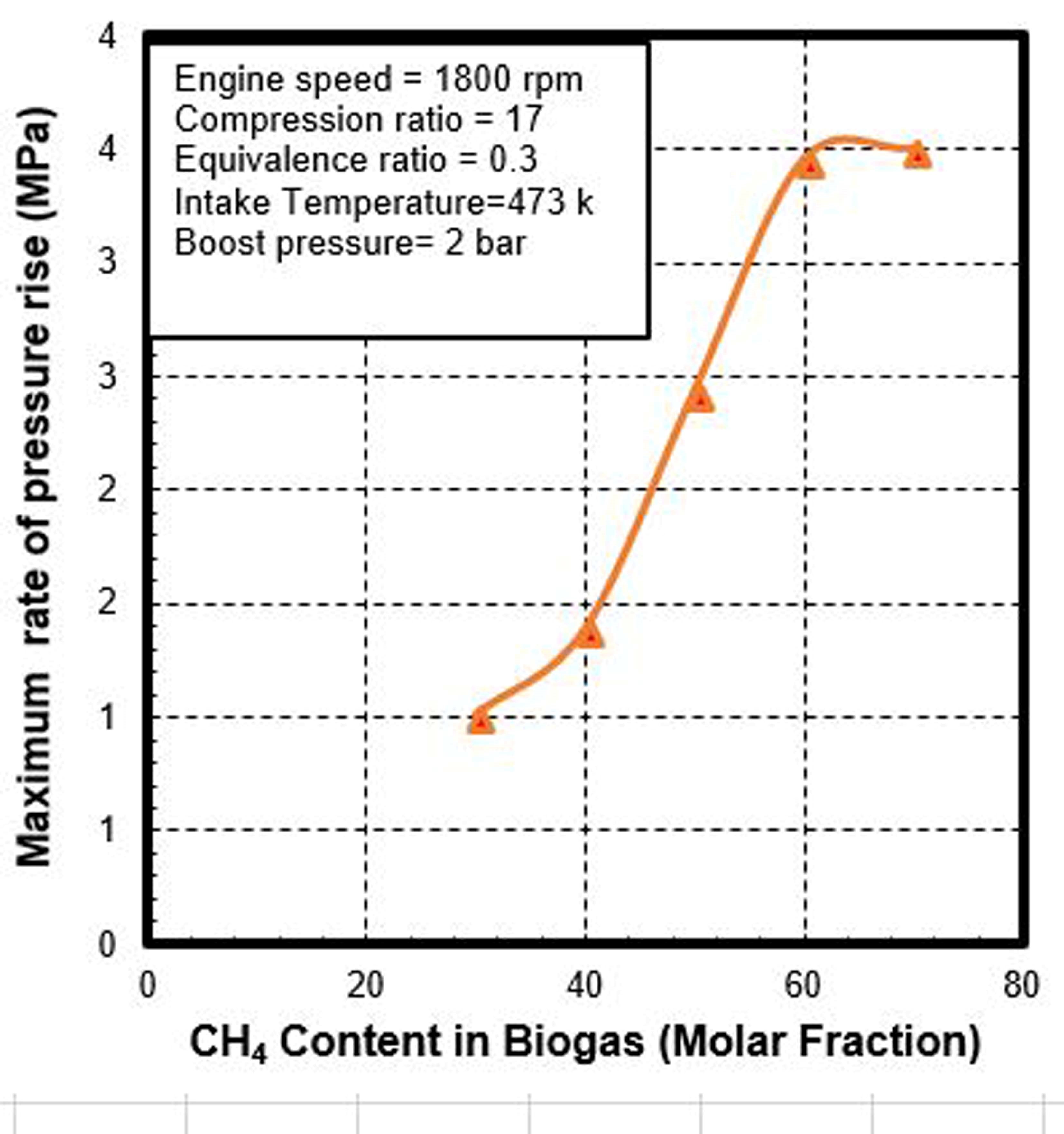 Figure 16. Variation of the rate of pressure rise with the crank angle 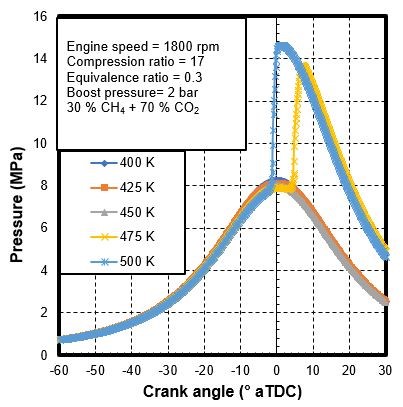 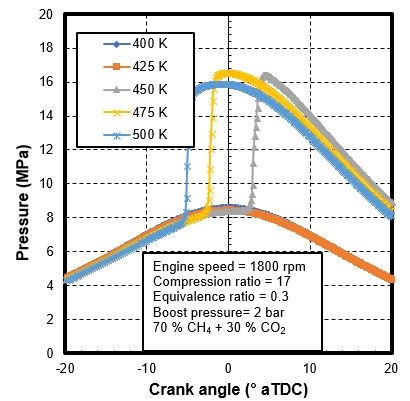 From the knowledge gained, all biogas compositions are sensitive to the change in temperature of 5 Kelvin. It can be seen from fig.18 and fig.19 that the requirement of high intake charge temperature decreases with an increase in the methane contents in biogas composition due to the increase in the lower calorific value of the fuel. The control of intake charge temperature has been shown as one of the effective strategies in controlling the combustion timing for different equivalence ratios, engine speeds [20].

SURFACE REPAIR TOOL IN STAR-CCM+ The surface repair tool is used to clear all the errors in the CAD geometry, so that the geometry is suitable for meshing process.   TYPES OF SURFACE ERROR   PIERCED FACES A pierced face is a face that is intersected Read more

Steps in a CFD Simulation   Problem Statement: The first step of the simulation is to gather information about the simulation process in general. What is the most convenient way of solving this problem in an economic way: Cheap solution: No high Read more

Objective To explore the SI Engine with its aftertreatment system and compare the results of all cases   Simulation Model   Model Overview   There are two circuits in the above model:                   Read more

Objective To explore FRM models and create a FRM model for a given engine configuration using FRM builder approach   FRM-(Fast Running Model)   A FRM model is a fully physical engine model that is designed specifically to run fast. When simulation sp Read more