The objective of this study are followed as given below

1. Perform a literature review on the physics behind shock waves

Shock waves are high pressure wave trails generated around a sharped corner body traveling at supersonic velocity. Before the body reaches actual supersonic velocity, the air parcel flowing closely over the body surface reaches supersonic speeds due to which the shocks are generated. In other words the pressure, temperature and density of air changes abruptly at the local region when this occurs.

Based on the body geometry, the shock waves formed can be categorized as normal shock, oblique shock and bow shock/curved shock. Certian cases of two dimensional waves in supersonic flow shows opposite effect of oblique shock, such waves are called expansion waves in which the supersonic flow is turned away from itself. In these cases, the flow passes over the surface at an inclined angle w.r.t to the horizontal and all the flow steamlines are deflected downwards.The change in the flow direction and other parameters takes place across a fan centered at point A as shown below:

1. The expansion takes place through a continuous succession of Mach waves which                  are isentropic in nature

The Boundary conditions generally used for solving CFD problems are Neumann BC, Dirichlet BC and Mixed BC. For Pradtl Meyer expansion wave problem, Neumann and Dirichlet BC are used

Neumann BC: In case of Neumann boundary condition, the gradient of the variable (

Dirichlet BC: For this type of boundary condition, the value of variable h(x,y,z,t) is specified at the boundary of the problem domain. This is also known as type I boundary condition. The head may be constant or may vary in space or in time.

For studing this a transient state flow simulation is set up through a 2D channel with convex corner and various sgs values were used to understand the dependency of SGS parameter on the cell count along with shock location. The setup will be done for subsonic inlet velocity and supersonic inlet velocity to observe the formation of expansion fan. The following grid size and SGS criteria will be opted to setup the cases

The procedure followed for setting up the simulation is provided below

Fig. 1: Geometry (All dimension are in m) 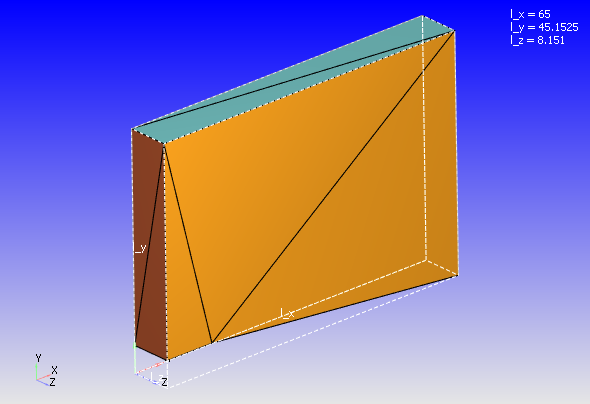 The Diagnosis tool looks for the following geometric issues

b. Nonmanifold Vertices: Checks for number vertex which are being shared between two           triangles

c. Open Edge: This highlights the number of edges of a triangle which not shared by any           other triangle

d. Normal Orientation: This highlights the number of traingles whose normal vector is               not pointing towards the interior of fluid domain

Since all the problem traingles are green ticked, there were no issues in the geometry

The figure below represent the boundaries flagged

a. Clicked on "Begin case Setup" and entered the value provided below

After this all the input files was imported to a seperate folder. Converge creates .txt  files which contains all the values entered while setting up the case for respective settings done above. These input files will be processed by converge using Message Passing Interface (MPI) standard

For running the simulation, Cygwin tool was used instead of converge studio interface. Cygwin is a POSIX-compatible API which is based on command prompt is used to run the simulation

a. Navigated to the folder location containing the input files

b. Entered the command> mpiexec.exe -n 2 converge.exe logfile & : This allows converge to run two processors (selection on number of processor cores present as per the system configuration, can use multiple cores if available) for the parallel processing and load balancing

d. After the simulation is over. Went back to converge studio>Post-Processing 3D

e. After the conversion of the post files to the binary output, open the Test.vtm (group file) file in Paraview

After opening the group file in paraview, clicked on apply to load the results. Created slice, and other contour plots as required 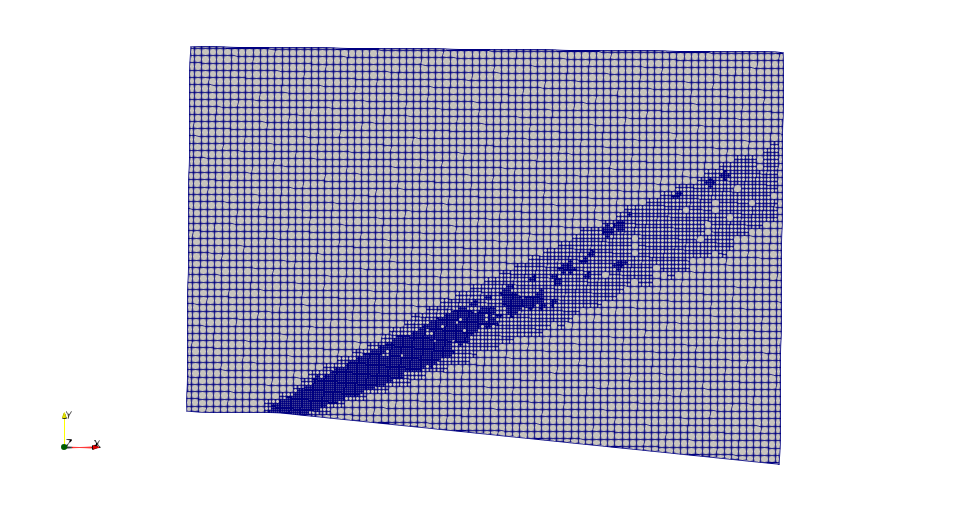 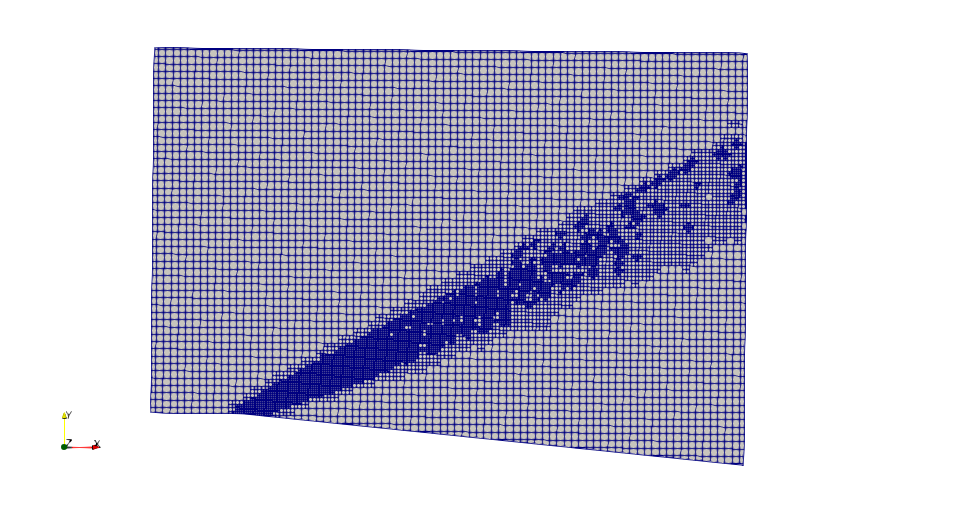 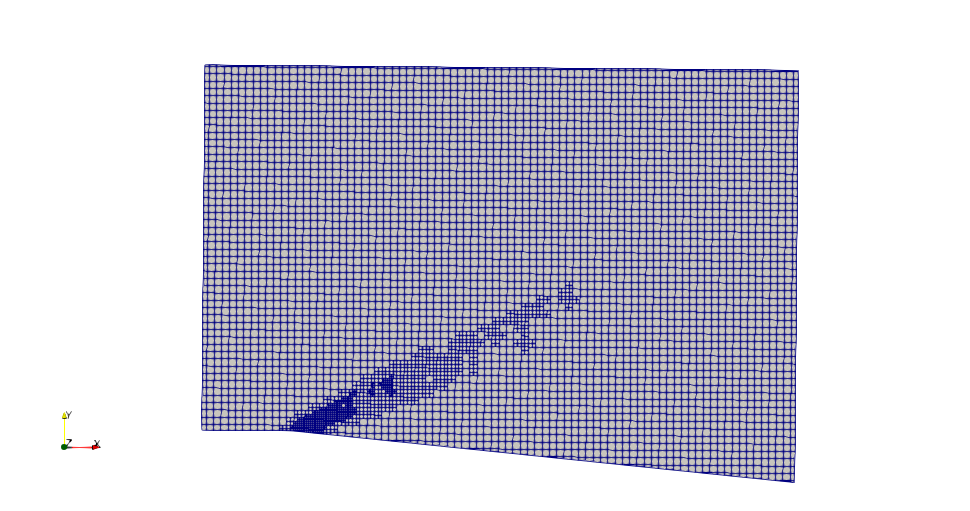 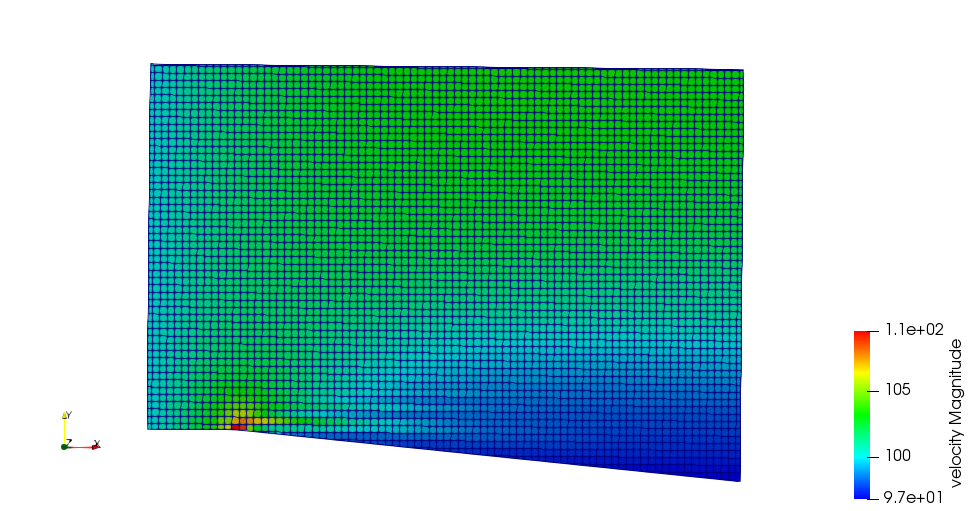 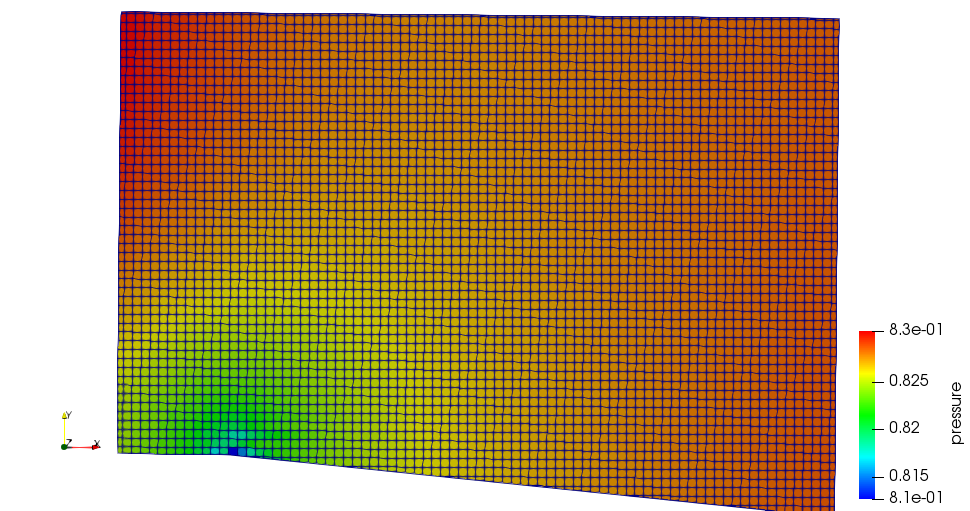 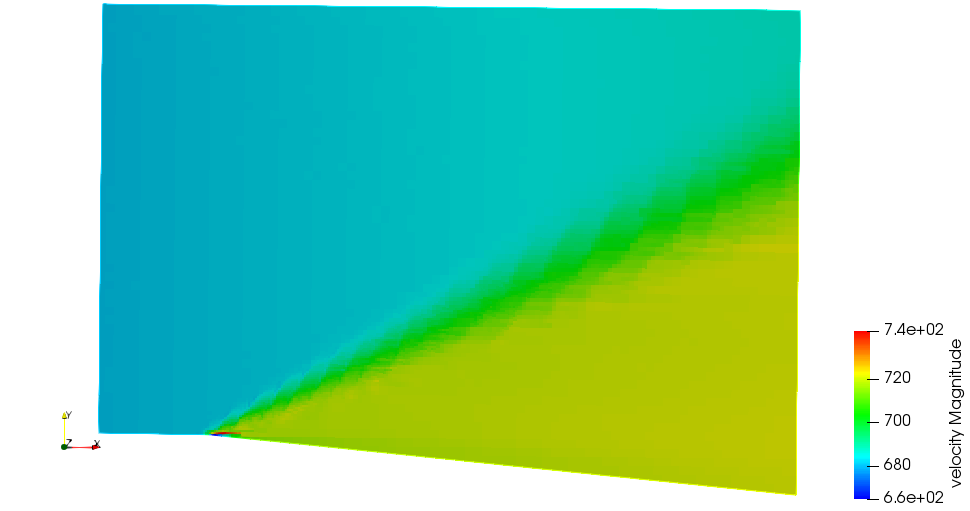 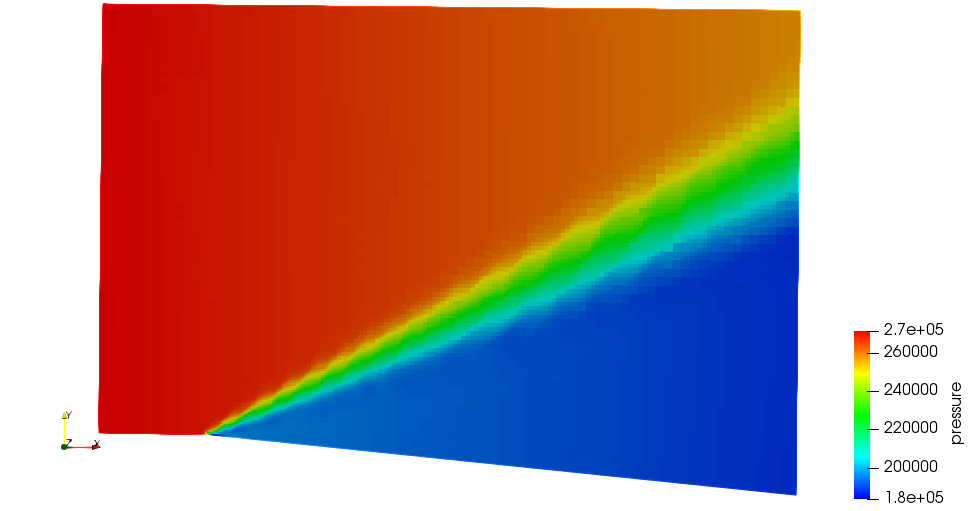 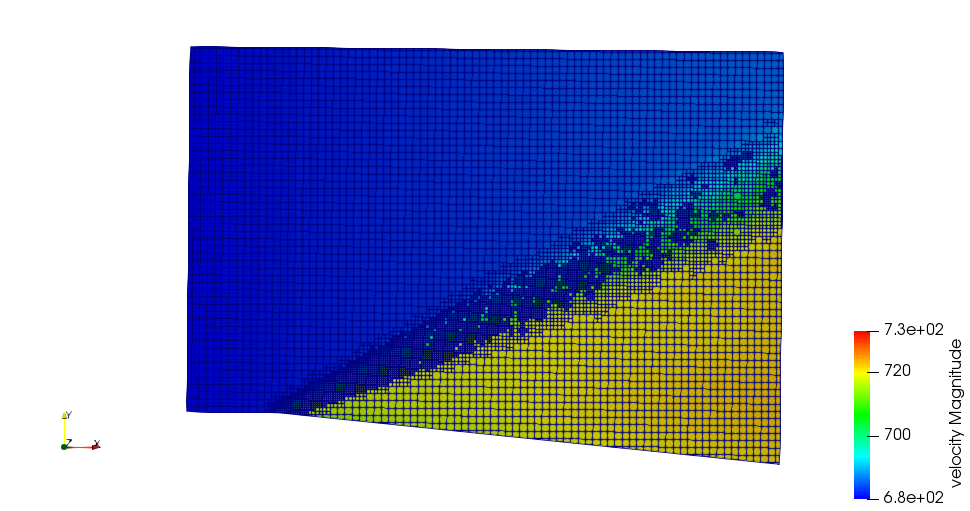 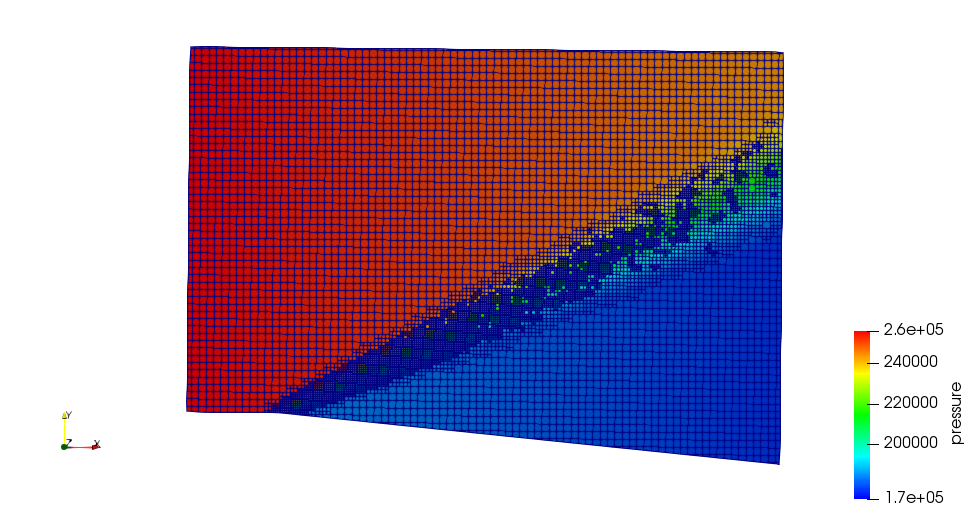 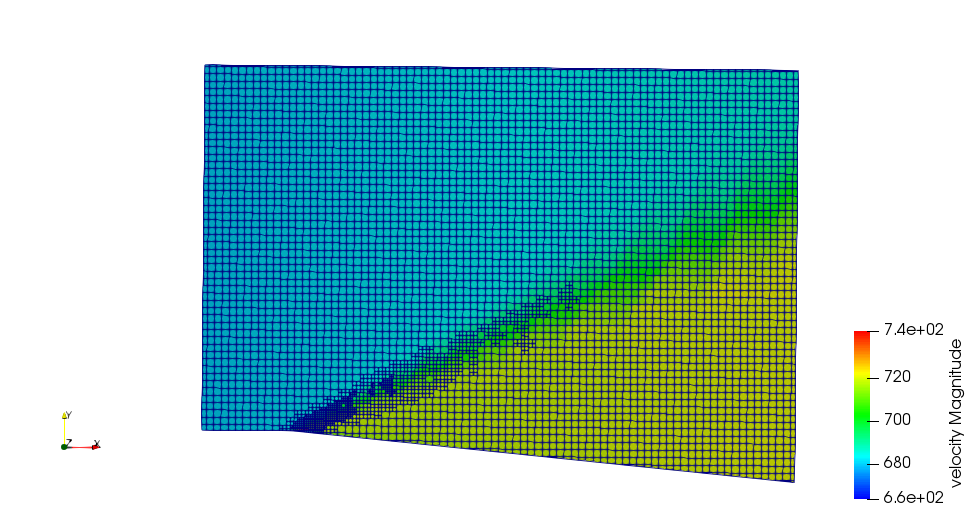 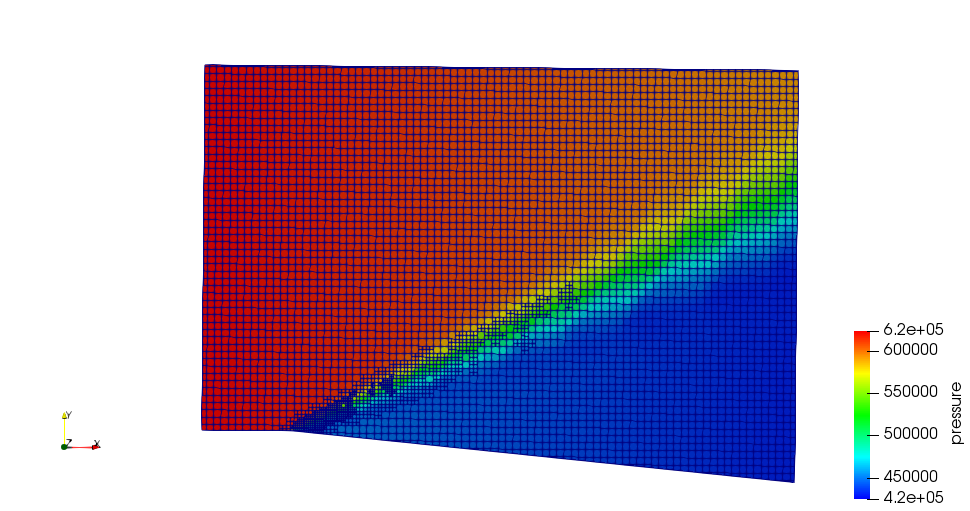 Case 1: Velocity with Surface with Edges

Case 2: Pressure with Surface with Edges

Case 2: Velocity with Surface with Edges

Case 3: Pressure with Surface with Edges

Case 3: Velocity with Surface with Edges

1. In the baseline case when the subsonic inlet velocity condition was used no change in the mesh count as the given SGS criteria was not fullfilled in the entire domain.

2. When the sub grid scale temperature change started at around 5000 cycles, the adaptive mesh refinement was observed.

3.In the supersonic flow, the effect of AMR based on temperature or velocity plays a very significant role in capturing physics. The SGS value should be kept low to capture the physics accurately; when the SGS parameter was provided was lowered in case 1 and 2, the formation of expansion fan was proper, but when increased in case 3, the formation of expansion fan was effected

4. Due to the formation of expansion shock, the static parameters such as pressure, density and temperature changed locally 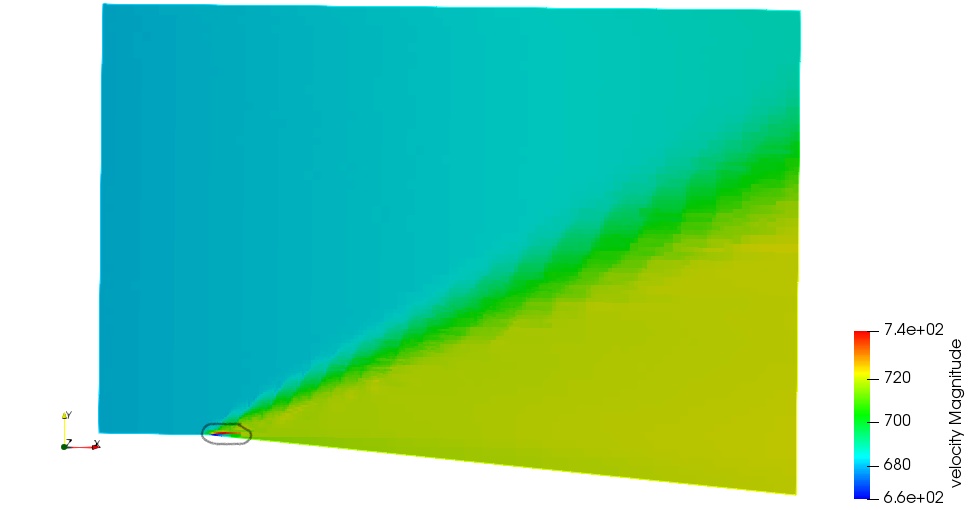 Objective: The objective of this report is to understand the different steps involved in any CFD simulation and the applications of CFD in Medical, Oil & Gas and Construction Industry 1. Steps involved in a CFD Simulation  Step 1. CAD Modelling/Geometry Impor Read more