The objective of this study is to set up a transient state flow simulation within a shock tube and understand the temperature and pressure distribution across the domain. The setups shall include two cases as per the grid sizes given below.

The procedure followed for setting up the simulation is provided below

Fig. 1: Geometry (All dimension are in m) 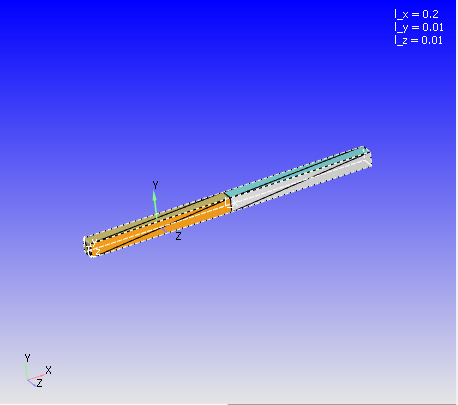 The Diagnosis tool looks for the following geometric issues

b. Nonmanifold Vertices: Checks for number vertex which are being shared between two           triangles

c. Open Edge: This highlights the number of edges of a triangle which not shared by any           other triangle

d. Normal Orientation: This highlights the number of traingles whose normal vector is               not pointing towards the interior of fluid domain

Since all the problem traingles are green ticked, there were no issues in the geometry

b. Since the high pressure and low pressure side is separate by a solid boundary, the separation boundary interface had to be deleted so that the mixing takes place

The figure below represent the boundaries flagged: 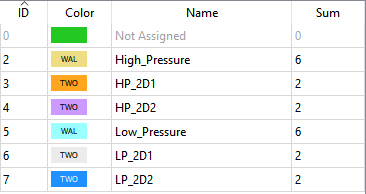 Note: For this case there are no inlet and outet boundaries, as the domain consists of two closed volume sub domains initially comprising of only N2 at high pressure and only O2 at low pressure respectively. An event is created in such a manner that these two initially closed and separated sub domains/regions are opened out at a certain time interval so that mixing takes place as N2 flows from higher pressure side to the lower pressure side where O2 is present

a. Clicked on "Begin case Setup" and entered the value provided below

2. Solving:After this all the input files was imported to a seperate folder. Converge creates .txt  files which contains all the values entered while setting up the case for respective settings done above. These input files will be processed by converge using Message Passing Interface (MPI) standard

For running the simulation, Cygwin tool was used instead of converge studio interface. Cygwin is a POSIX-compatible API which is based on command prompt is used to run the simulation

a. Navigated to the folder location containing the input files

b. Entered the command> mpiexec.exe -n 2 converge.exe logfile & : This allows converge to run two processors (selection on number of processor cores present as per the system configuration, can use multiple cores if available) for the parallel processing and load balancing

d. After the simulation is over. Went back to converge studio>Post-Processing 3D

e. After the conversion of the post files to the binary output, open the Test.vtm (group file) file in Paraview

After opening the group file in paraview, clicked on apply to load the results. Created slice, glyphs and other plots as required

2. At the temperature across the domain is constant till 0.001s, post which the high pressure and low pressure region are opened, and variation was observed as the high pressure shock propagates. The N2 gas at high pressure enters the low pressure region containing O2 which a shock wave, compressing it adiabetically, resulting to increase in temperature and pressure. After a certain time, the shock rebounds back after hitting the boundary. In the second cycle the incident and reflected shock wave collide, and the process continues till the shock dies out

Objective: The objective of this report is to understand the different steps involved in any CFD simulation and the applications of CFD in Medical, Oil & Gas and Construction Industry 1. Steps involved in a CFD Simulation  Step 1. CAD Modelling/Geometry Impor Read more