The separation of two regions having high & low-pressure fluid by a diaphragm. The two-fluid gets mixed when the diaphragm breaks and flow simulation is done in the CONVERGE studio and post-processes the results in Para view and CYGWIN was used to run the commands for simulation and converting the files for the post-processer. The N2 and O2 gas are used simulation.

i) To simulate the flow of the shock tube using transient solver.

ii) Plot the pressure and temperature history in the entire domain.

iii) Plot the cell count as a function of time.

The Shock tube is a tube of a rectangular or circular in cross-section, usually constructed of metal, which has two sections. The driver section of the shock tube is the high-pressure section which is supplied by the high-pressure gas from the reservoir & the driven section of the shock tube is the low-pressure section which contains the low pressure-driven gas. These two sections are separated by a metal diaphragm. The method of rupturing the diaphragm utilizes a mixture of combustible gases, with an initiator designed to produce a detonation within it, producing a sudden and sharp increase in what may or may not be a pressurized driver. This blast wave increases the temperature and pressure of the driven gas and induces a flow in the direction of the shock wave but at a lower velocity than the lead wave.

The bursting diaphragm produces a series of pressure waves, each increasing the speed of sound behind them so that they compress into a shock propagating through the driven gas. This shock wave increases the temperature and pressure of the driven gas and induces a flow in the direction of the shock wave but at a lower velocity than the lead wave. Simultaneously, a rarefaction wave, often referred to as the Prandtl-Meyer wave, travels back into the driver gas.

The above plot shows the various waves which are formed in the tube when the diaphragm is ruptured.

i) Pre-processing(preparing the surface geometry and configuring the input and data files).

iii) Post-processing(analyzing the *.out ASCII files in the Case Directory and using a visualization program to view the information in the post*.out).

The diaphragm is created between the two parts in CAD modeling which are not required for the simulation and it also is shown as an error in the Converge. 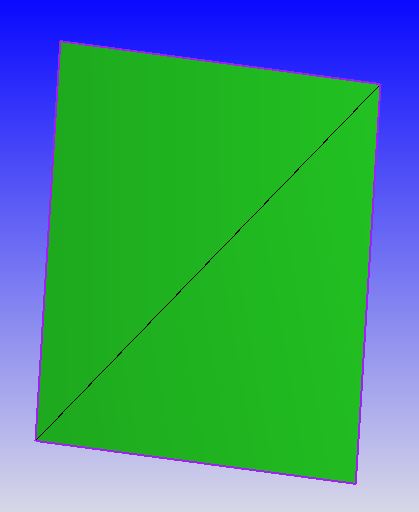 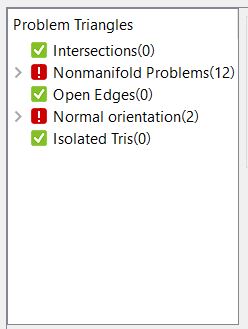 The error pops up due to the diaphragm as the vertices are shared by more than two triangles and normal orientation is due to the wrong direction of the normal.

Select on the Normal toggle option and direction on the normal must be in the direction of the flow of air.  The CONVERGE is mainly developed for running the IC engine simulation & other types of flow simulation are considered to be General flow. So General flow is selected. 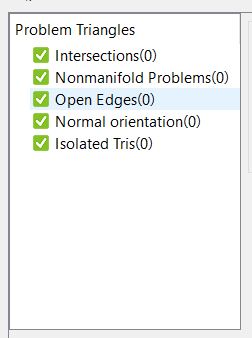 The flow is considered to be two-dimensional flow by consider the front and backside to be 2D boundary condition and along the other axes, high pressure and low-pressure region are set. 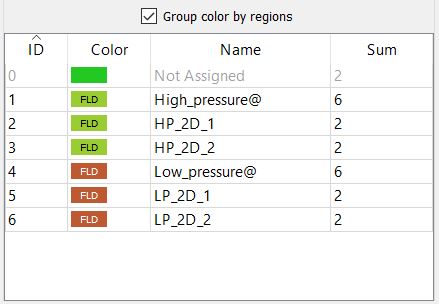 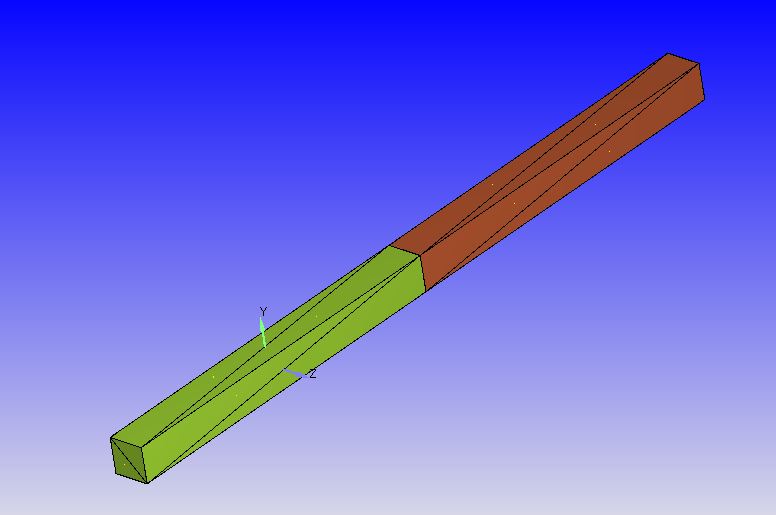 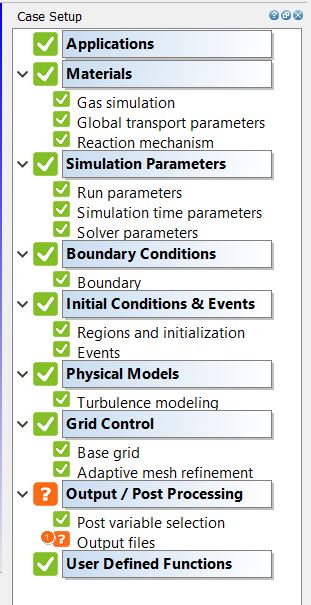 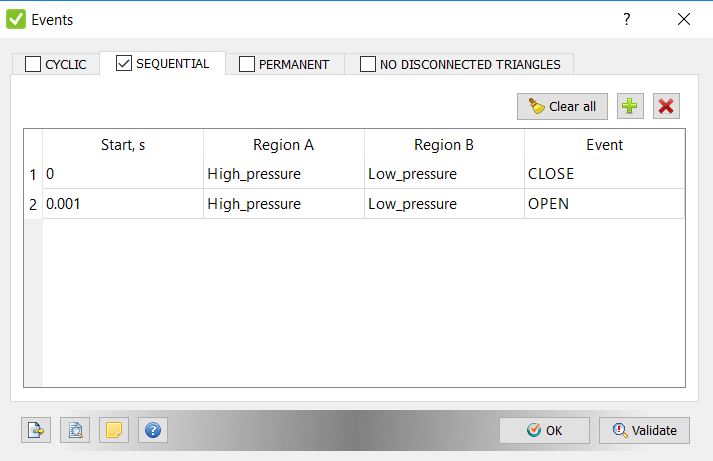 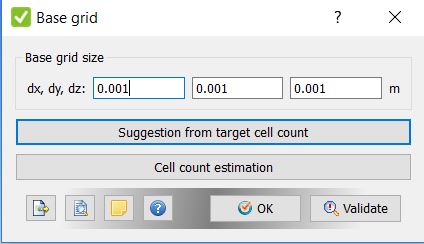 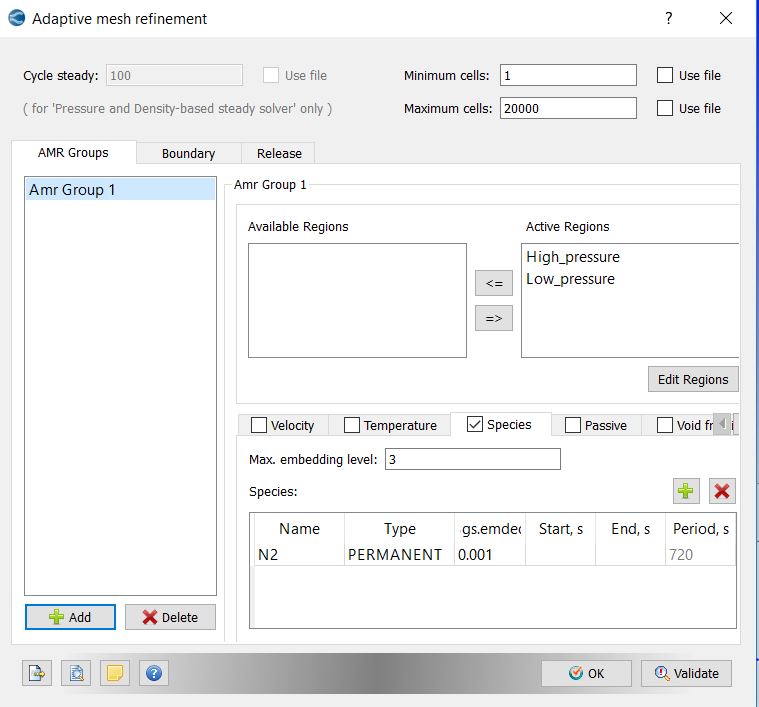 7. Output/post-processing – Validate all the files under it.

File --> export – To export the case set up for running the simulation using CYGWIN.

Results of the plot

The pressure is maintained at the respective regions where the event is kept closed. When diaphragm ruptures the N2 & O2 gets mixed the pressure of the N2 gets reduced and the O2 gets increased and after sometime when the gas hits the wall the refracted waves are generated which causes the increase in the pressure of the N2 & decrease in the O2 value. Since the flow is irreversible across the shock wave the entropy is not constant so total pressure downstream decreases always which is clearly depicted in the plot.

The total cell count is constant for about 0.001s where the diaphragm is kept closed after which the diaphragm opens. we have used adaptive mesh refinement which is the technique used to refine the mesh based on the criteria we set. The embedding value is set to the value of 3 which is used to refine the mesh of a factor of 3. The difference between the actual and approximate value calculated from the simulation is set to 0.001 when the difference becomes large mesh refinement occurs. The back & forth movement of the N2 causes this cell count increases and cell count reaches a maximum value of 9000 cells.

Provide a suitable case name & select the Paraview VTK inline binary format as the file type and enter the directory which contains the output files which are to be post-processed & then click all in the files & cell variables and click convert.

Click apply & select the slice option & choose the z normal to divide the geometry along the z-axis.

The shock tube simulation is completed and the results are plotted. The shock tube is mainly used to study the properties of the fluid at an elevated temperature and pressure. The shock wave when hits the wall gets refracted back and the mixing of the fluid occurs. The Mach number decreases across the flow so the velocity value also reduces. Additionally, the gas behind the reflected wave is at rest relative to the shock tube. Usually, there is some mixing and interdiffusion of gases at the contact surface so that the temperature fall is less sudden than in the ideal case. In the case of IC engines, this shock tube data is important to find the ignition delay i.e, how long it takes to ignite fuel and air.

OBJECTIVE           The aim of the project is to perform a flow analysis over an Ahmed body and perform a grid dependence test by varying the mesh around the Ahmed body. Ahmed Body           Ahmed body is a gener Read more