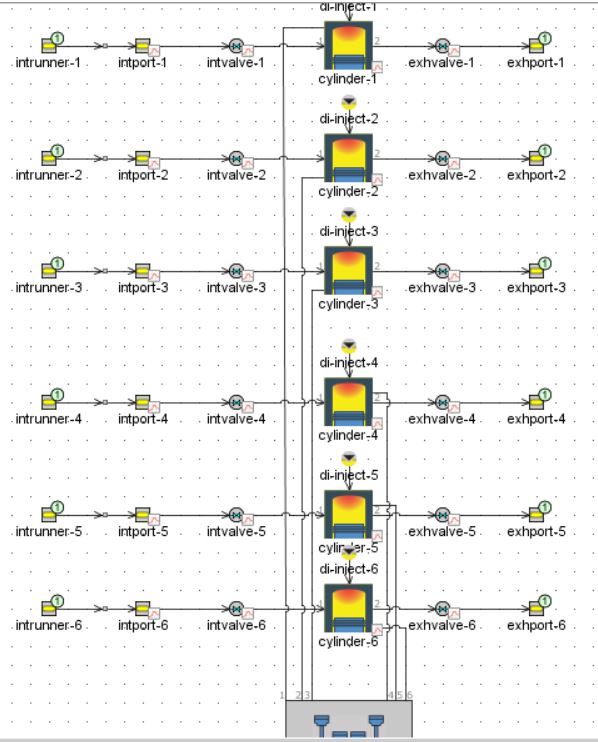 The intercooler for the intake is been assembled, the template library is used to import the parts to the model.

The inlet condition is set to the compressor outlet condition and intercooler is mainly used to reduce the temperature of the intake air as at high temperature the density reduces which will reduce the volume of the air intake. The intercooler model is run to check for the pressure drop of 0.2 bar across the cooler to check whether all conditions are set properly. After the verification, the model is then attached six-cylinder model.

The next process is the addition of pipes depending on the flow of the gases and the conditions are set to default.

The four different models were set with the same environment conditions only the parts used are different and the output of each model is compared.

The compressor outlet and the turbine inlet conditions have already been set through EndEnvironment boundaries. In this way, the base engine performance can be tested for errors. This would indicate if the base engine model (manifolds, valves, cylinders, etc.) is properly modeled before we start complicating the system with the turbocharger. 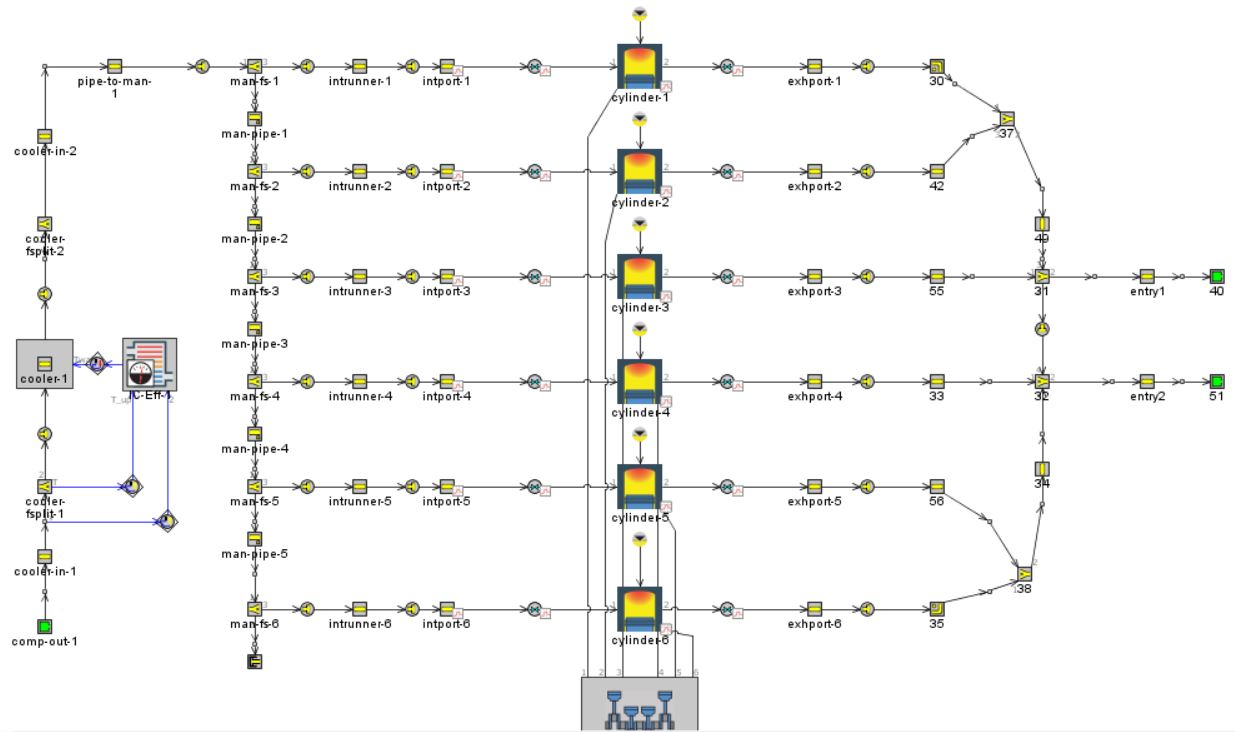 ii) With Compressor only

Start by deleting the EndEnvironment part that represents the compressor outlet conditions. Next, open the template library and copy the 'Compressor' template from the Flow                -->Turbines, Pumps and Compressors folder and 'SpeedBoundaryRot' template from the Mechanical --> 1-D Rotational Mechanics folder into the project library. Double-click on the 'Compressor' template and start filling in the object values below as the values provided for our conditions. The data related to the compressor were explained in detail by the Compressor-turbine model below. 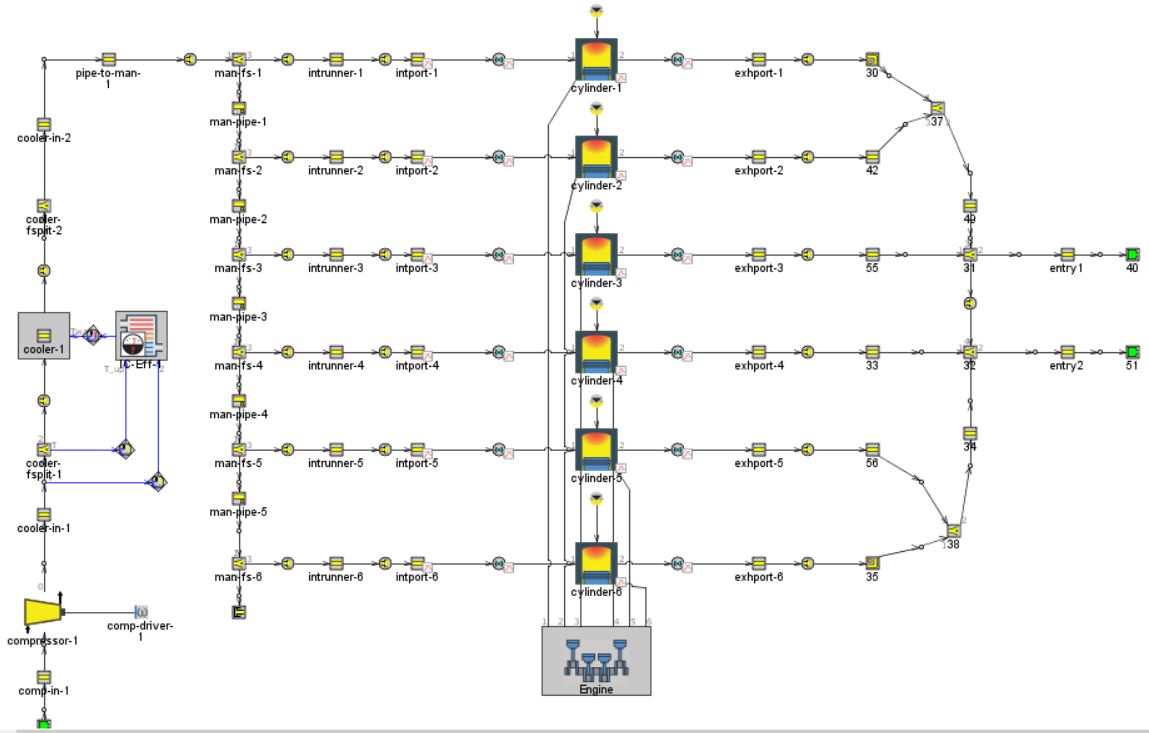 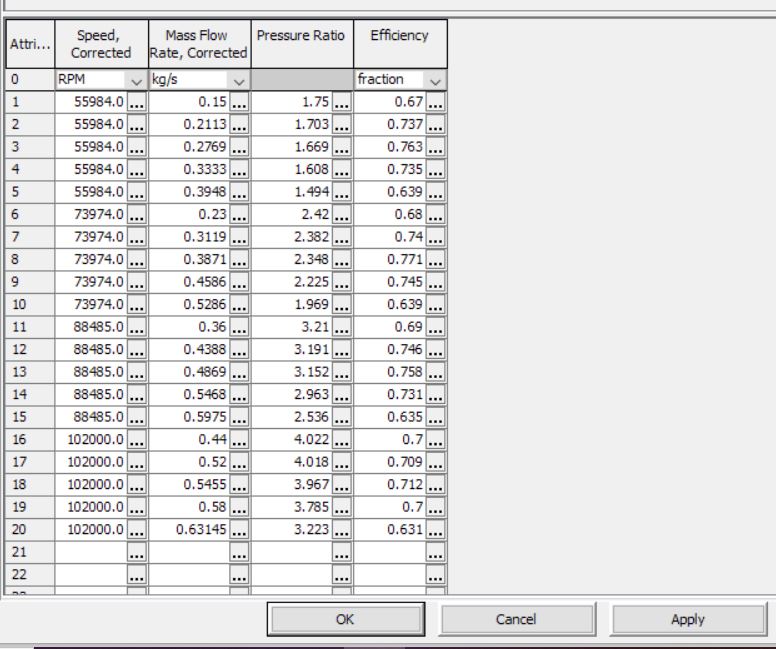 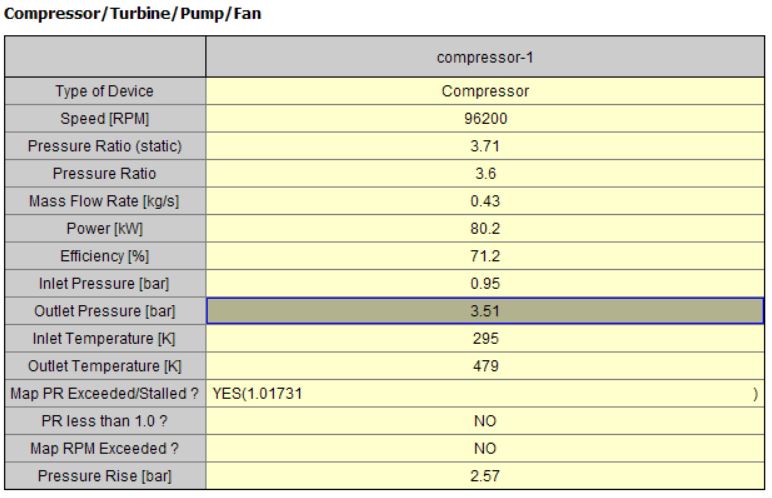 iii) With turbine only 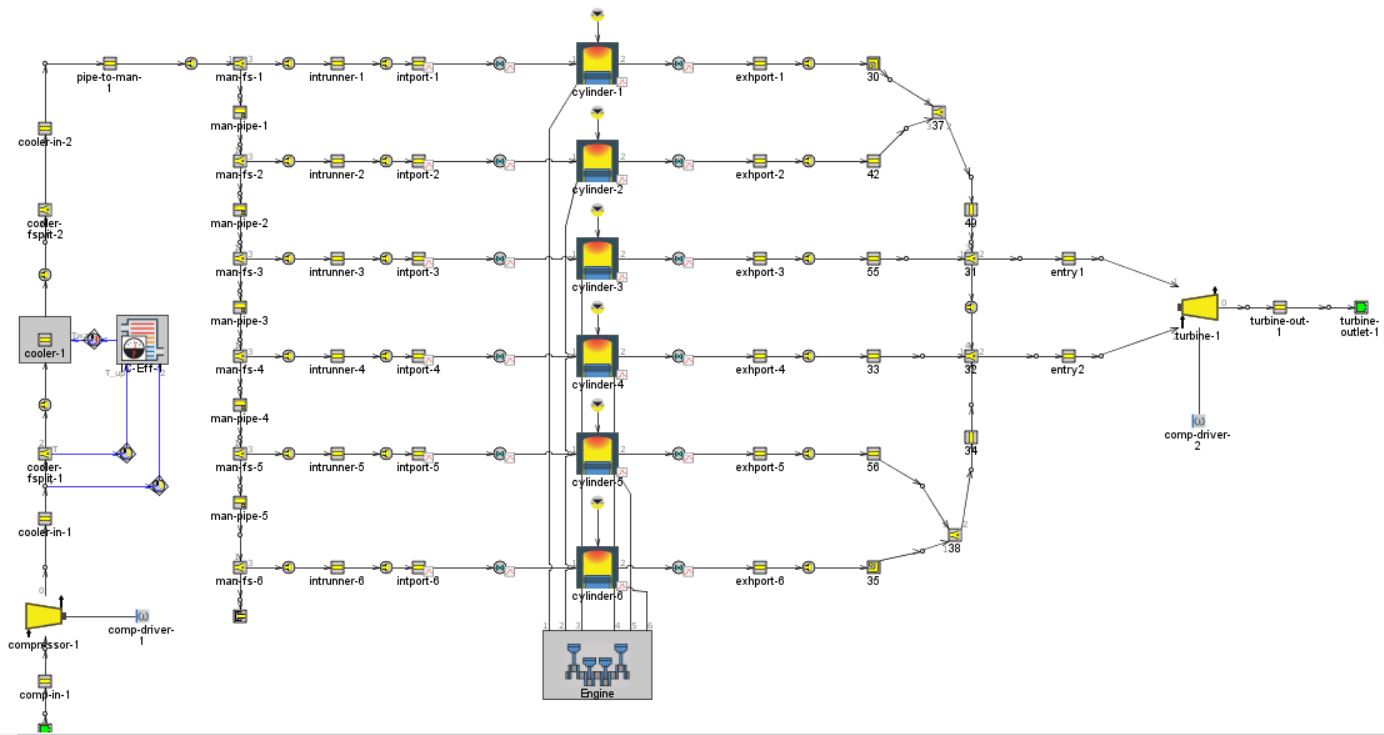 iv) With turbine and compressor 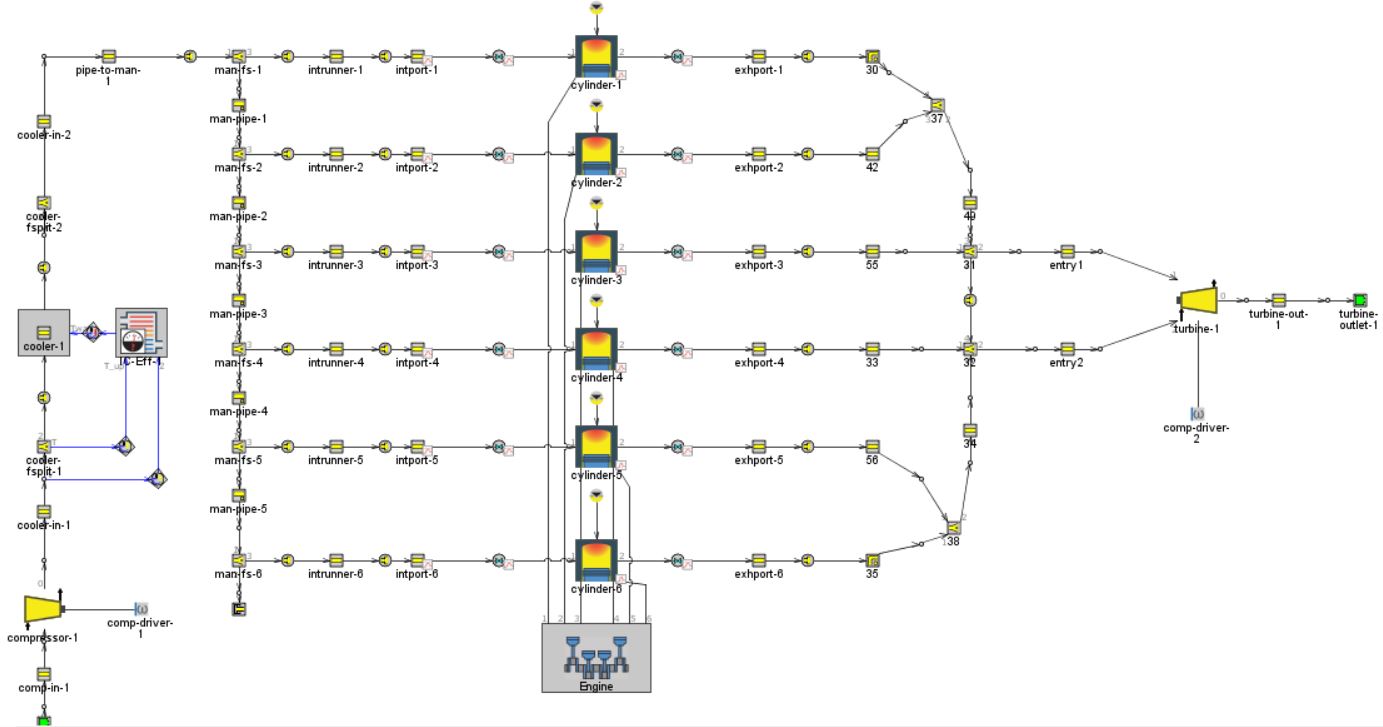 v) With turbine and compressor coupled 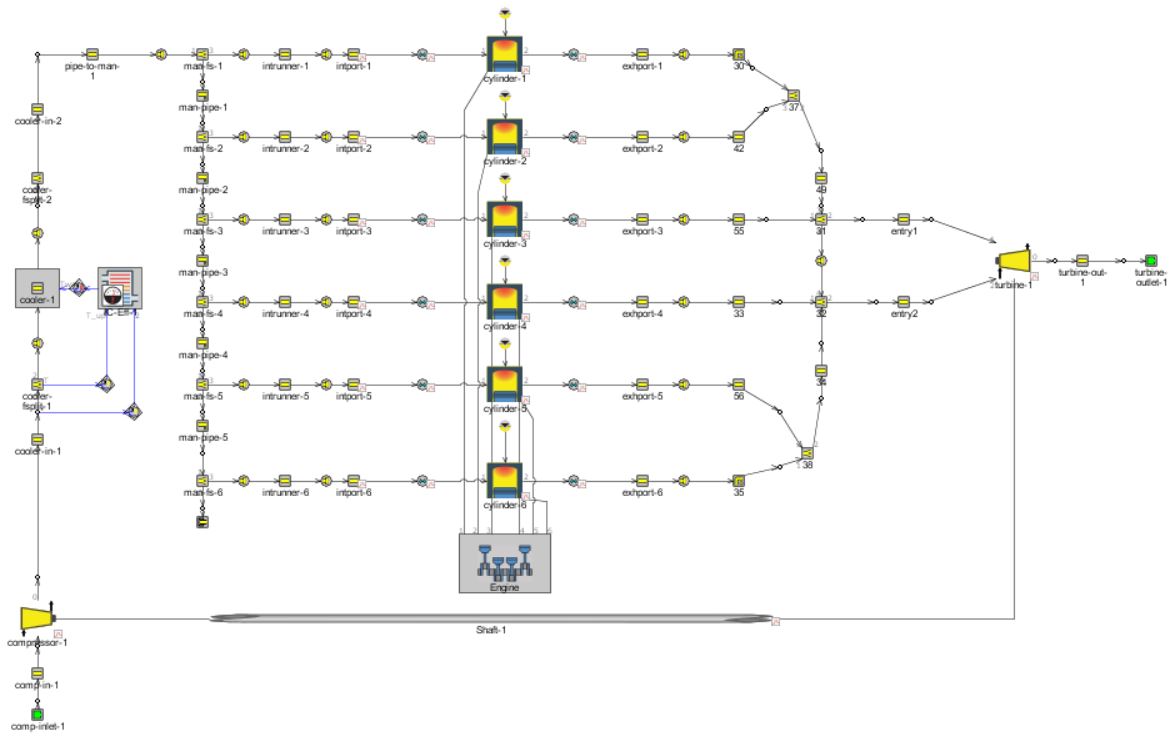 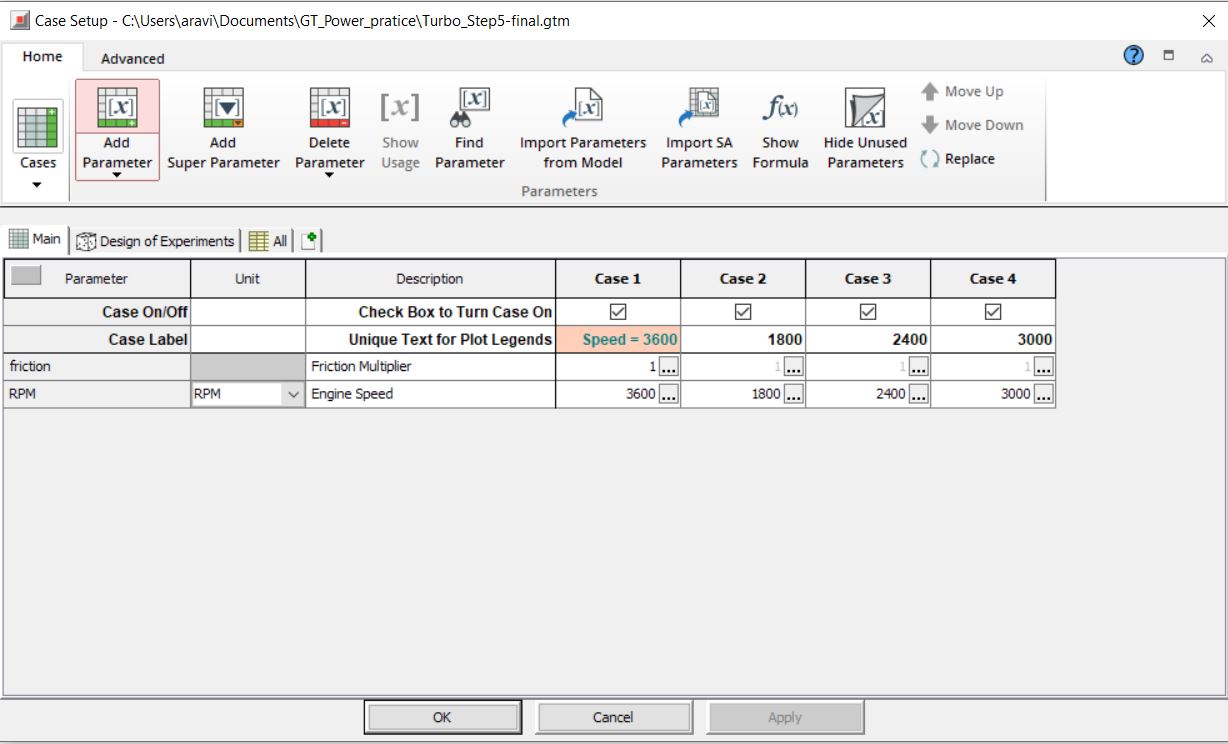 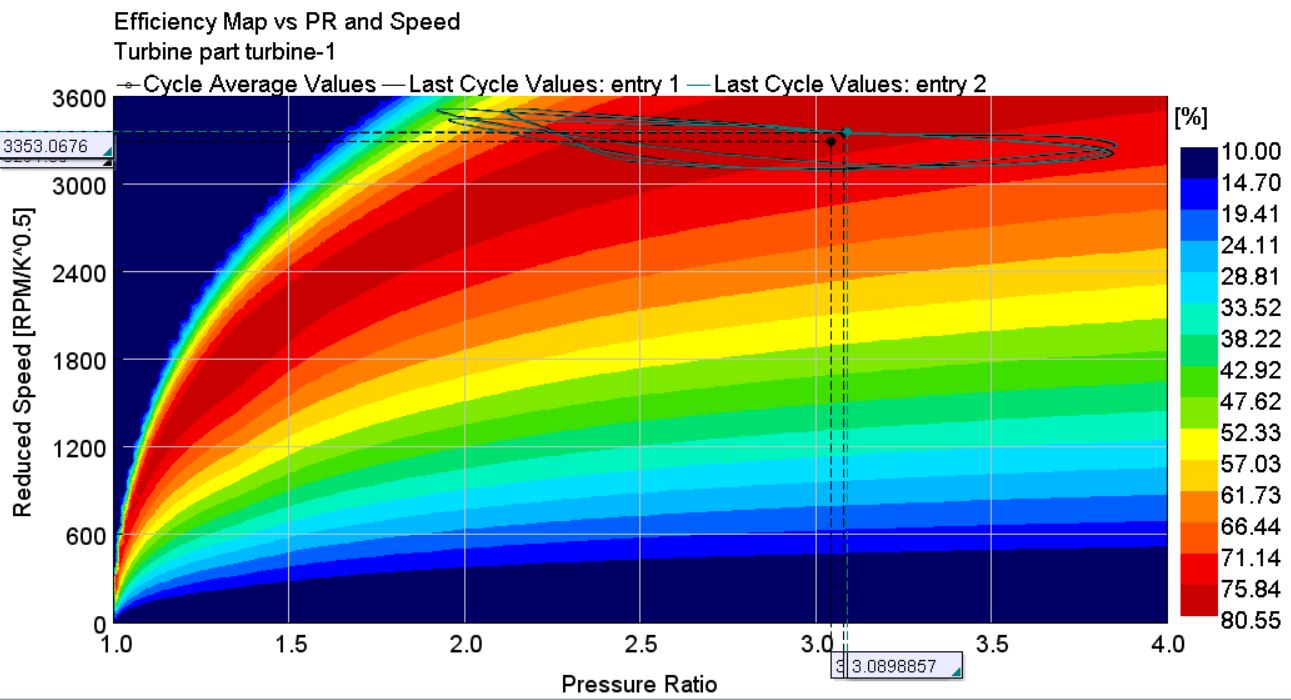 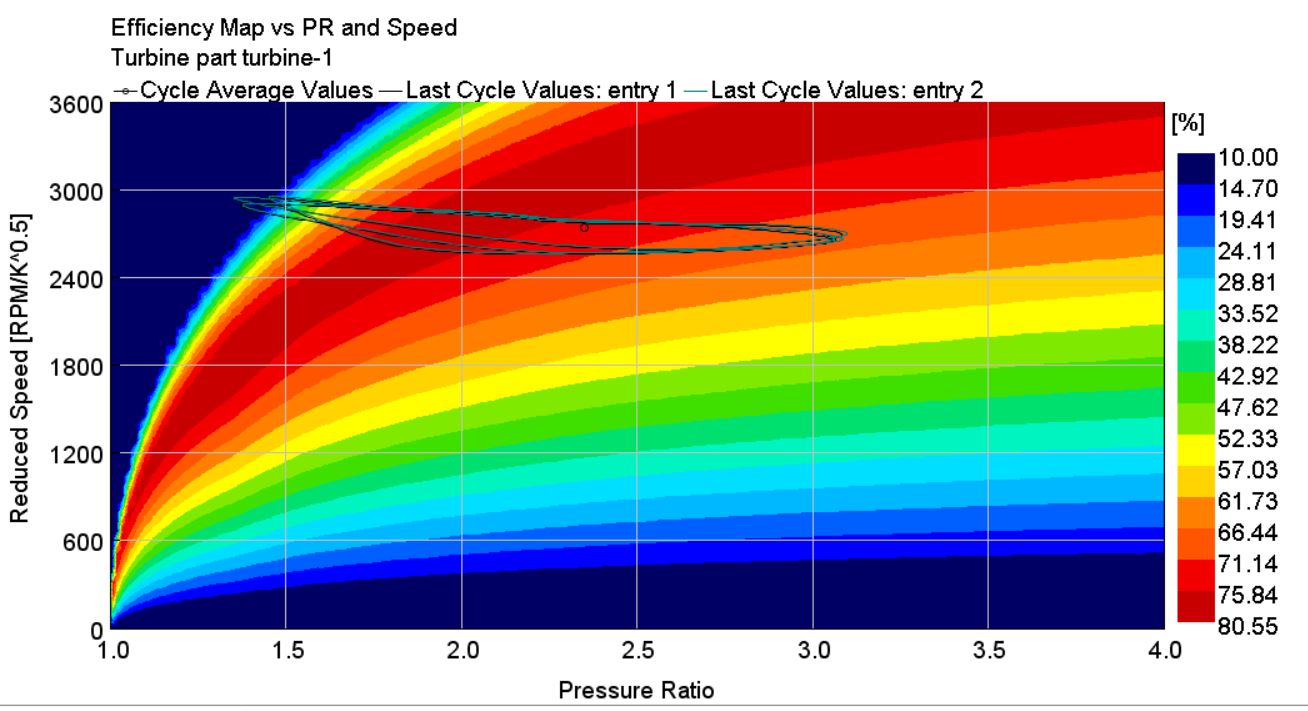 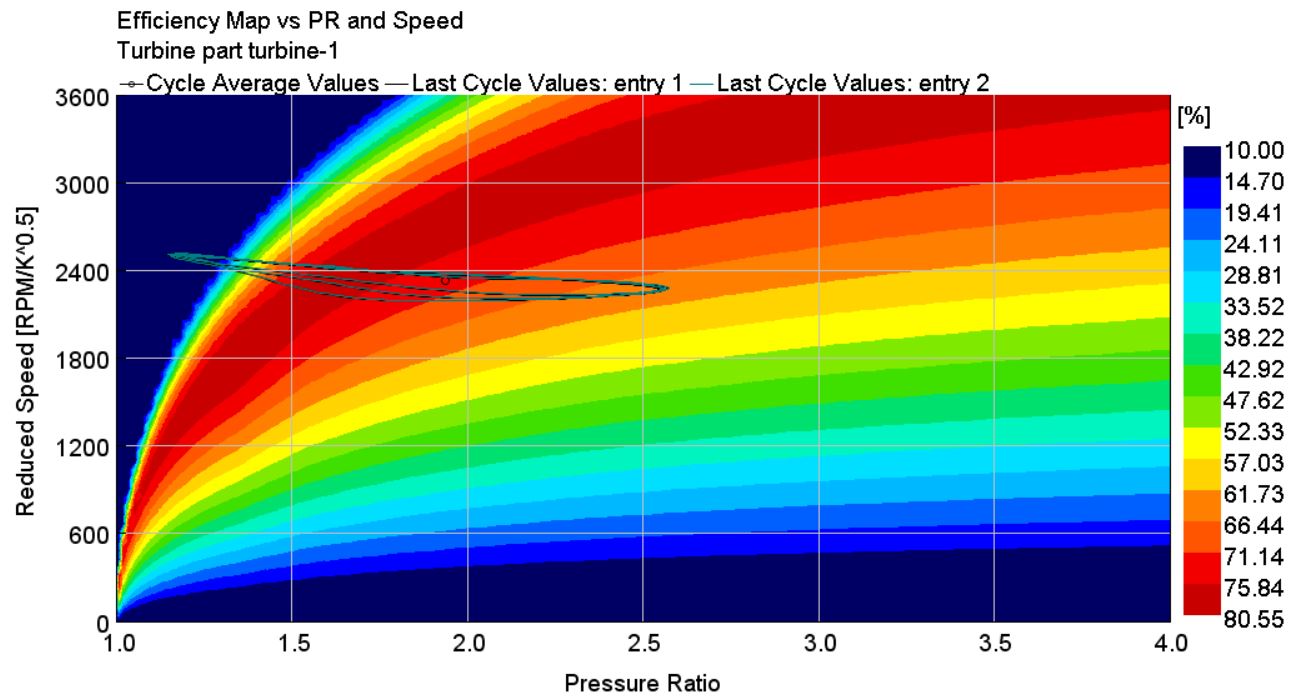 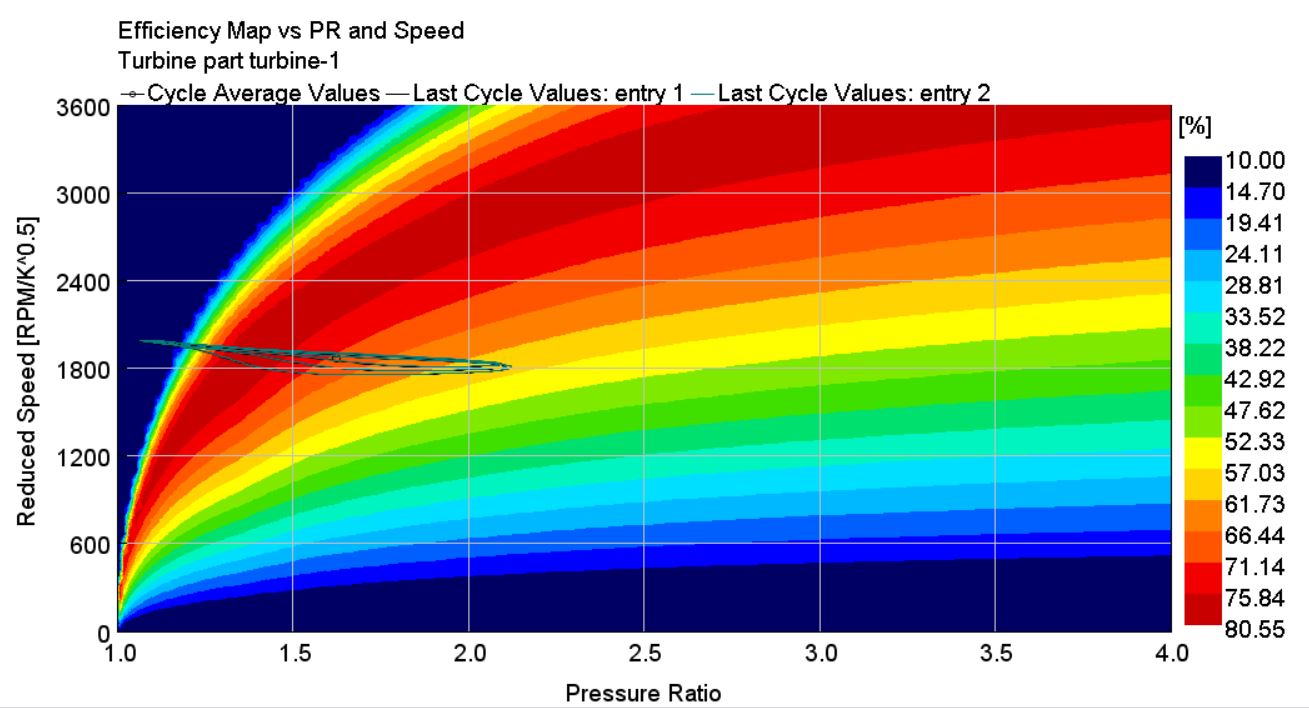 The fixed geometry is set to obtain maximum efficiency for the single rpm so the efficiency decreases with the rpm variation. The value at 3600 rpm is obtained as 80% efficiency and so in order to have constant efficiency the variable geometry turbocharger is used.

The benefits of variable geometry turbines over wastegate turbines include :

The engine is a 4-cylinder, four-stroke, direct injection, 2L diesel engine. The intake system consists of the air piping upstream of the compressor inlet and contains a simple model of an airbox. The airbox is modeled as a group of interconnected flow splits that represent the total volume of the airbox. At the inlet and outlet of the air box, "bellmouth" orifice connections are used to model smooth transitions. The intercooler is found downstream of the compressor outlet. This intercooler is an air-to-air intercooler that is modeled using a "semi-predictive" method based on heat exchanger effectiveness.

The intake manifold is modeled as aluminum using heat conduction objects to calculate the wall temperatures. The fuel is injected directly into the cylinders. Both the injection timing and the injection profile are looked up using an 'RLTDependence' as a function of engine speed and injection rate. The exhaust manifold is modeled as cast iron using heat conduction objects to calculate the wall temperatures. The model includes an exhaust gas recirculation (EGR) system to transport exhaust gases from the exhaust manifold back to the intake manifold. The turbocharger in this model contains a fixed geometry compressor and a variable geometry turbine (VGT). For the VGT, there are 5 different sets of turbine map data entered at each of 5 VGT rack positions. A full vehicle exhaust system is modeled downstream of the turbine outlet. The geometry of a Diesel Oxidation Catalyst (DOC) is modeled using a 'CatalystBrick' part. 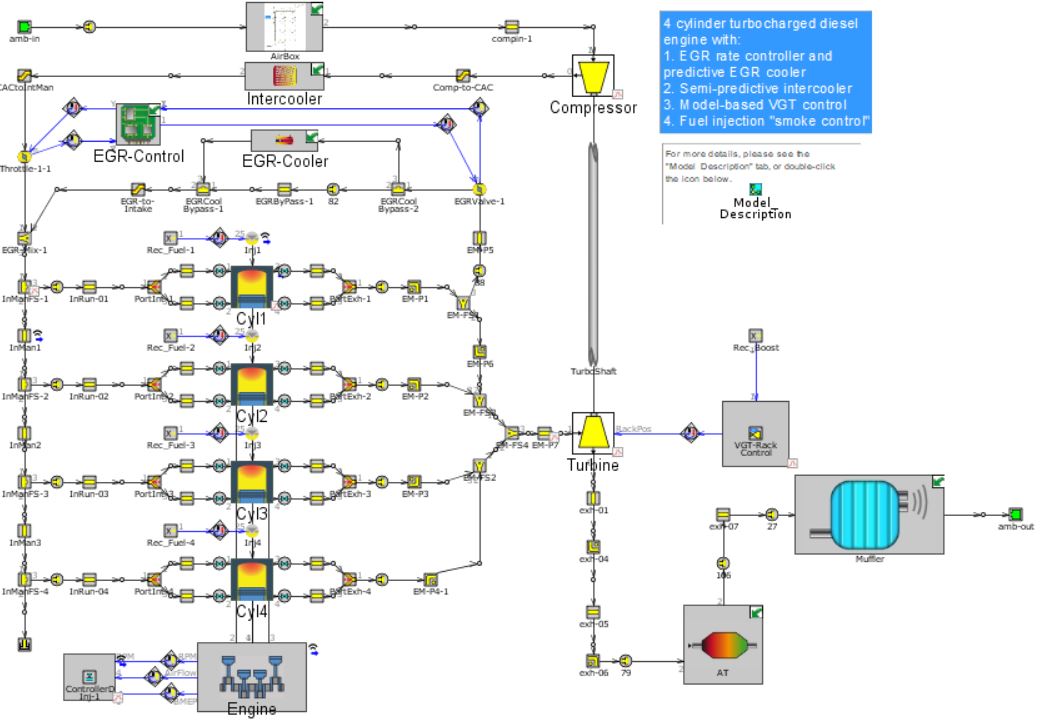 The model is run for the 5 different cases 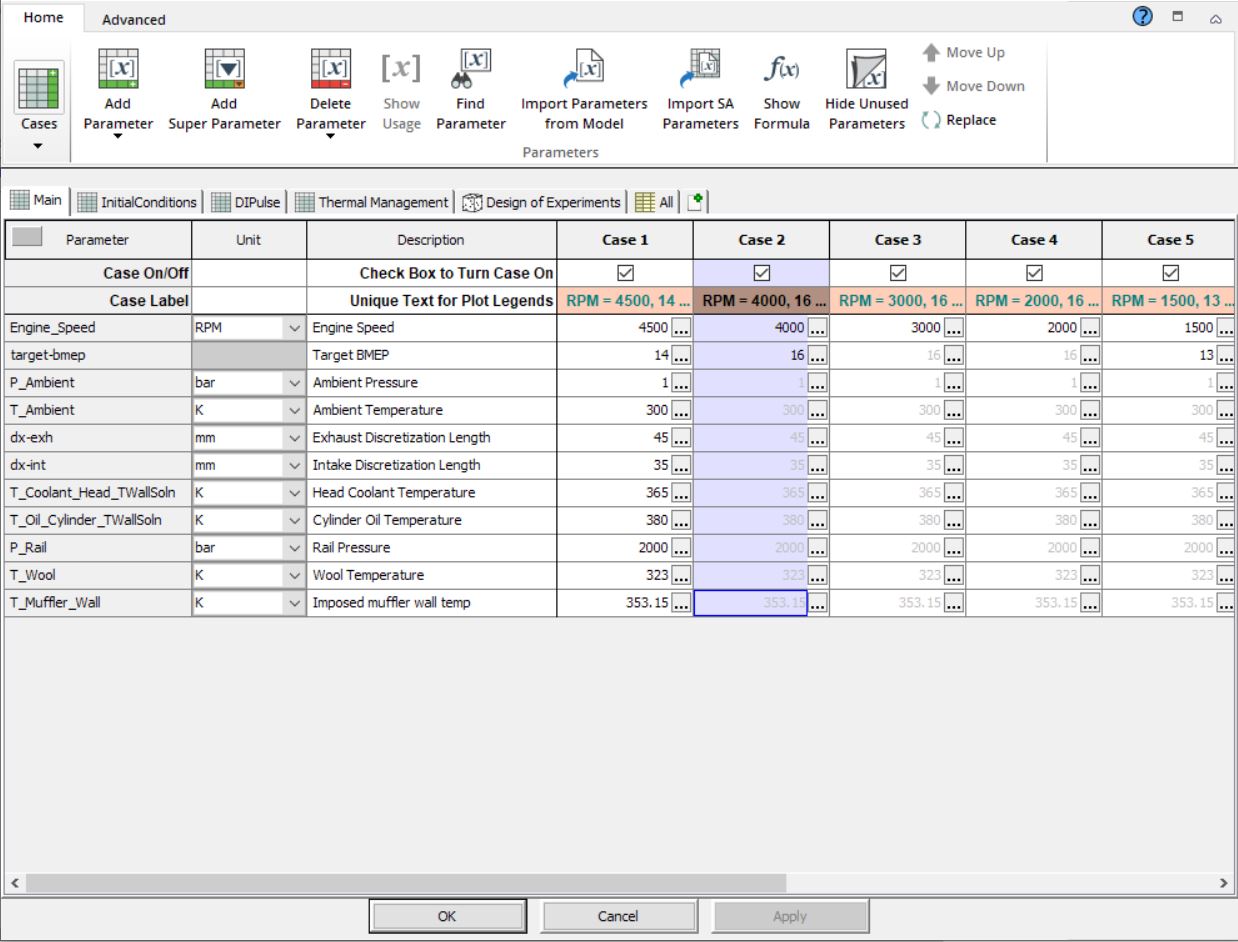 The turbine is set for the 6 different rack array & for each case map data are set. 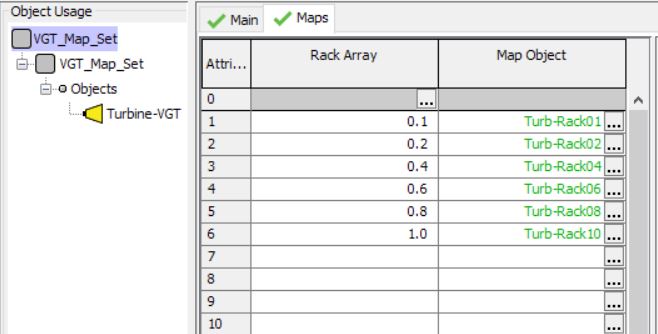 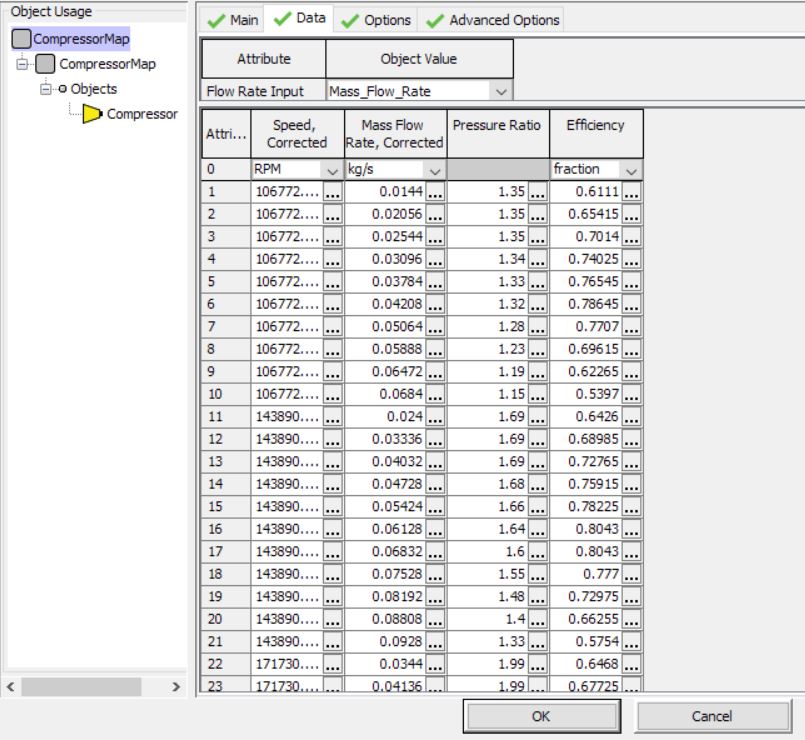 INTRODUCTION The foundation of GT-SUITE is a versatile multi-physics platform for constructing models of general systems based on many underlying fundamental libraries: Flow library (any fluid, gas or liquid or mixture) Acoustics library (both non-linea Read more